The art of the 0-2 count: From the pitcher's perspective

Share All sharing options for: The art of the 0-2 count: From the pitcher's perspective

In last night's game, both Shelby Miller and Kevin Siegrist did something that, as a former (and much less talented) pitcher, gave me fits. They allowed hard-hit, potentially game-changing hits on 0-2 counts. Both pitches were fastballs, and both pitches were in the strikezone. These occurrences irritated me so much that it led to me scribbling them down hurriedly so that I wouldn't forget about them later:

I take great pride in my handwriting, and the disheveled appearance of it in the picture above shows the amount of frustration I had while I watched what occurred on my TV. Also, I noted that both events occurred in the top half of the innings, which obviously is not possible considering the game was at Turner Field in Atlanta, Georgia. I was frustrated, so I'm giving myself a free pass on this mistake. Enough about that, let's dive into the details:

Miller versus Evan Gattis in the fourth: 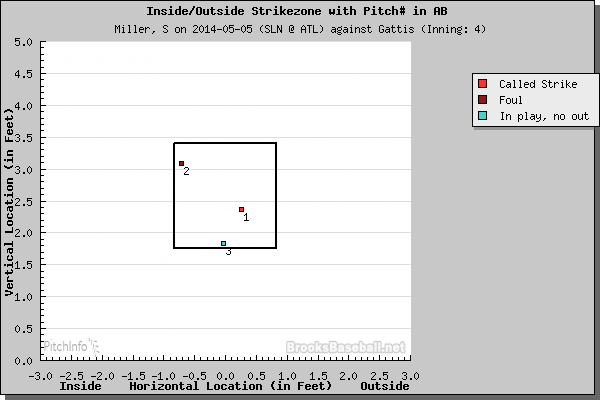 Realistically, Miller's location on the 0-2 pitch was actually not that bad.  Down in the zone and on the edge of the strikezone is somewhere I would like Shelby to live on a more regular basis. However, as I discussed in my post on Miller's fastball a few days ago, the pitch just is not moving all that much for him right now. In my opinion, if Miller wants to throw his fastball on an 0-2 count, it better be out of the zone or have a substantial amount of movement on it to not allow for solid contact. This one had neither. It was both in the zone and had less movement than even his decreased average this season at 3.01 inches. To top it off, the pitch was located in one of Gattis' hottest zones according to this ISO heat map from BrooksBaseball. It was only a single, but it could have been much worse with seemingly "all-or-nothing" Gattis at the plate.

Siegrist versus Ramiro Pena in the seventh: 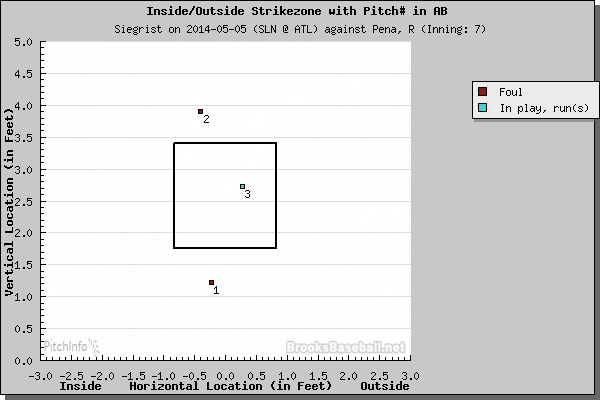 Unfortunately, Siegrist didn't get quite as lucky as Miller, and frankly, he didn't really deserve it. Siegrist threw Pena three straight fastballs: 96.8 MPH, 96.4 MPH, and 96.0 MPH. Despite Pena "timing up" the fastball with back-to-back foul balls on tough pitches out of the zone, Siegrist (and admittedly, Yadier Molina) still decided a fastball, up and over the plate, was his best bet for strike number three. This choice ended up being deposited over the left-center field wall for a home run. Sure, he missed his spot by four to six inches, but it was still incredibly frustrating to watch, and it cut the Cardinals lead down to just one run. Siegrist's breaking ball is nothing special, but this situation was the perfect time for him to "spoil" one and hope to get Pena chasing. At the very least, it would change Pena's eye level, making it that much easier to finish him with a fastball up in the zone on the very next pitch.

According to Baseball Reference, Cardinals pitchers have reached 0-2 counts 306 times this season. They have thrown 178 strikes in this count and have allowed 16 hits. Sixteen hits do not seem like much, and realistically, it probably isn't (for perspective, the Braves have allowed 13 and the Pirates have allowed 26). Yet, it is still something I would like to see Cardinals pitchers work on going forward, especially when it involves throwing fastballs in the strikezone.

Enjoy tonight's game! I will be watching it from Ballpark Village for the very first time, so I am hoping it is a fantastic experience.