It's nice to play a team underperforming worse than the Cardinals and to keep them there.

Trevor Rosenthal closed out the game, getting Justin Upton to stare at strike three, as the Cardinals beat the Braves 4-3 in the first game of the series.

"How's the horizontal movement look on Shelbster's fastball?" is a question my girlfriend asked me in my mind just now, and since you all are probably curious, too, here's a graph of it: 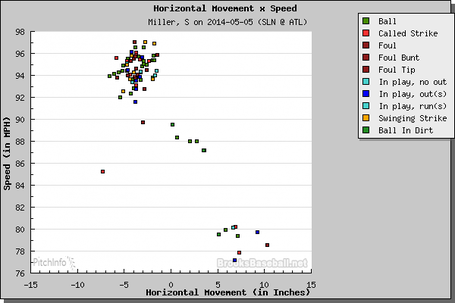 Shelby threw his fastball 69 times out of 86 pitches, or about 80% of the time, and Brooks Baseball says the average horizontal break was -3.74. You'll recall that Aaron pointed out that Miller's fastball has been breaking less so far this season--two or three inches less than in his (Shelby's) near-perfect game last year.

It's unclear just how important a fastball's break is in getting batter's out, and while it's probably safe to say that more is better, speed and location are crucial, too. "So what was Shelbster's fastball velocity?" a girlfriend might ask. It averaged 94.5 and topped out at 97, according to PITCH f/x, and that's great. His command of his fastball was less great, but he was able to pitch up in the zone to get lots of fouls and swinging strikes, which is what you should do against the Braves. His curveball and cutter were inconsistent, so let's just call those works in progress for a little bit longer.

Before yesterday's game, there were many of us who loved Peter Bourjos for the gazelle-like beauty of his outfield defense and advocated for him and his non-terrible (but controversially so!) bat to be the default center fielder for Mike Matheny. There were others who believed in Peter even more strongly but who had seen Matheny's reliance on Jon Jay and on matchup histories and had despaired that he (Bourjos) would ever start again. These are the Knights of Infinite Resignation that Kierkegaard described.

And what of the Knights of Faith? Those breathtaking true believers who both desponded and yet knew that young Peter would receive another chance and would shine therein? None smile broader than they do, for this is a thing that happened last night: 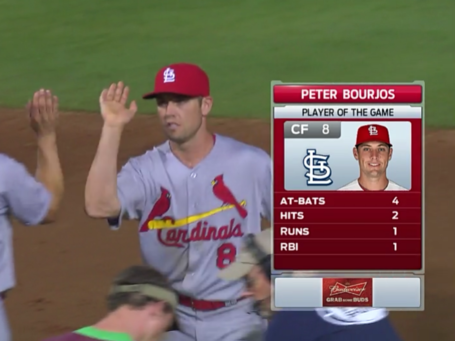 PLAYER OF THE GAME. How was this accomplished? Bourjos went 2-4, scoring one and scoring once, as you can see up there. And it was awesome to see, but the surest sign that the gods were watching and laughing last night was this, in the crucial fifth inning:

1. Peter Bourjos singles on a line drive to center fielder B. J. Upton.

when in fact Bourjos had merely check-swung a floater up the middle on the first pitch of the at-bat. I honestly think Bourjos could have run to B.J. Upton faster than that line drive got there. But the skid was officially ended, and even the near-misplay of Freddie Freeman's liner in the first would be forgotten in the heroics to come.

If you want to see an example of the "hidden" but real effects of having a very fast ballplayer on your team, look to these innings. A quick rundown:

None of the above is a criticism of Jon Jay, mind you. It's just a reminder that the Cardinals have fantastic depth at the outfield position, and that Peter Bourjos is a major part of that depth, even if the way in which he's valuable is easy to overlook. Even if your job is to not overlook such things. 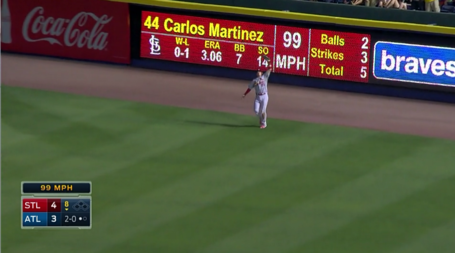 Possibly I included this photo as proof that Allen Craig should be played less and less in right field--but possibly also I included it for the beautiful yellow-on-red Carlos Martinez stats.

A WPA chart that the Cards will forever be victorious on: