The hitting profiles of the St. Louis Cardinals: Infielders' edition

This is part one of a two-part series. In it, you will find the hitting profiles of the Cardinals infielders with bottom line descriptions of their hot and cold zones.

Share All sharing options for: The hitting profiles of the St. Louis Cardinals: Infielders' edition

For today's post, I decided to provide career hitting zone profiles from BrooksBaseball, along with bottom line descriptions of the St. Louis Cardinals infielders. Unfortunately, BrooksBaseball data only goes back to 2007, so the profiles from hitters like Holliday, Molina, and Ellis exclude all data from seasons prior to that. Zones outlined in green are what I consider hot zones for that particular hitter, and zones outlined in orange are what I classify as cold zones. For sample size reasons, I did my best to avoid any particular zone with less than 15 at bats. 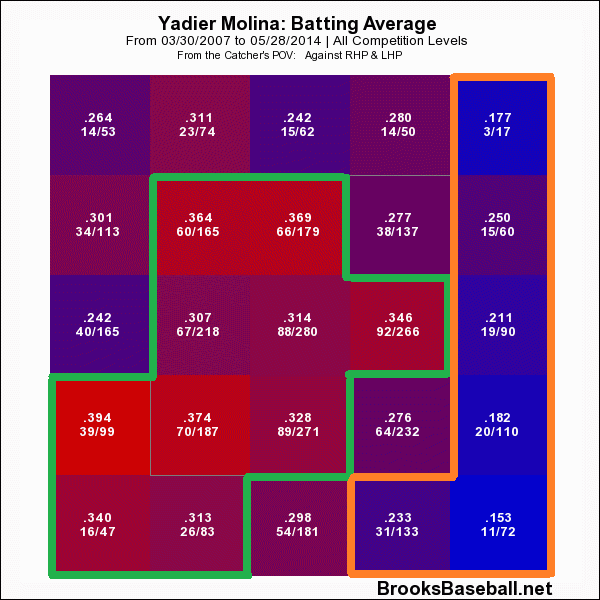 Bottom Line: Molina has come a very long way since 2004 through 2006. If he had become a mere "serviceable" hitter, he would have had value to the Cardinals due to his Hall-of-Fame caliber defense and unparalleled ability to handle a pitching staff. Instead, he became an All-Star caliber hitter, and his hitting zone profile is plenty indicative of it. Of the 25 zones, Molina is hitting over .300 in 12 of them. That's impressive, but also not surprising considering Molina is a .299 hitter since the start of the 2007 season.

In the rather large area outlined in green, which contains three zones that are actually out of the strike zone, Molina is a .342 hitter. In the area outlined in orange (of which all six zones are out of the strike zone), Molina is a Kozma-like .205 hitter. If you are going to try to get Molina out on a pitch in the strike zone, down and away or up and away is likely your best bet. Even then, Molina is a respectable .277 hitter in these two zones. Thus, getting him to chase pitches away is your best bet. Now, you just have to have enough movement on your stuff to actually get him to chase these pitches out of the zone. 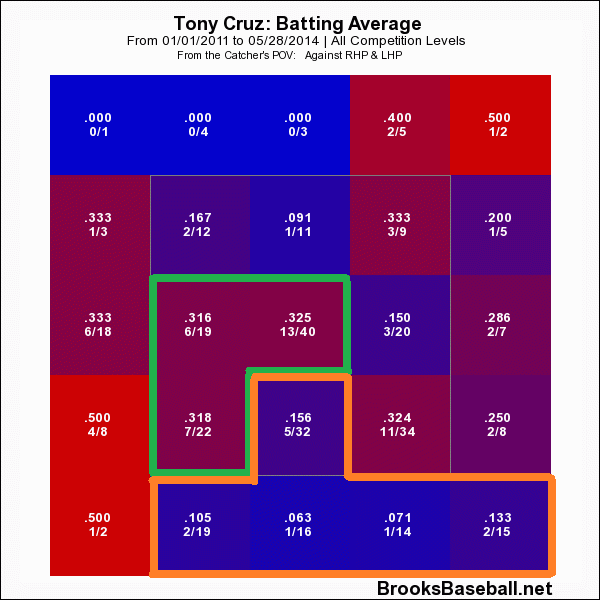 Bottom Line: Despite being in the majors since 2011, Cruz's hitting zone profile is still pretty hard to analyze due to small sample sizes. He is hitting .115 in the area outlined in orange, and he's hitting .321 in the area outlined in green, but like I said earlier, I would like larger sample sizes before making a final, concrete judgement on his hitting zone profile. However, I would rather it be this way because it means Molina is healthy and playing just about every single day. 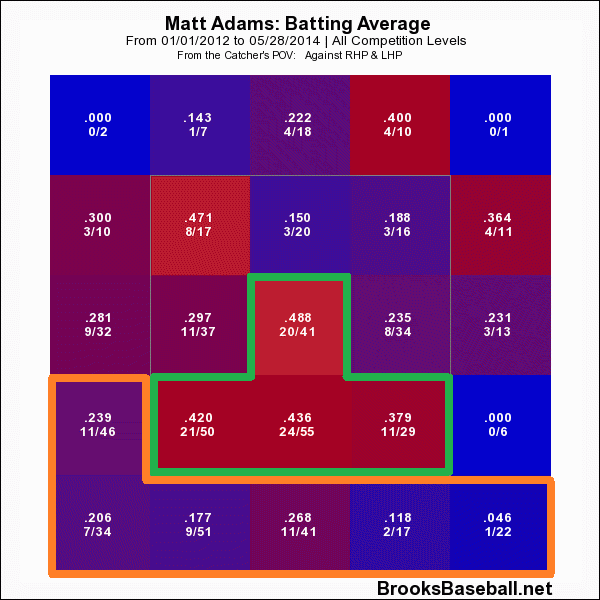 Bottom Line: Adams absolutely mashes pitches (.434 average) in the area outlined in green. However, just below that (outlined in orange and out of the strike zone) is a particularly cold area for Adams at .194. If you have watched enough plate appearances from Adams, you have seen the amount of trouble he has on pitches low and out of strike zone, especially on breaking balls from left-handed pitchers.

The first step to Adams improving his LHP split is simply laying off these pitches completely because it is quite apparent he has supreme trouble with them. In my opinion, Adams should not swing at any LHP breaking ball until there are two strikes in the count. Of course, if he is having trouble picking up the spin out of the pitcher's hand, then we have a lot bigger problem on our hands.

Unfortunately, due to small sample sizes (less than 20 at bats in each zone), I decided to not include a hitting profile for Wong. However, given the amount of debate regarding his future at the plate, I look forward to taking a closer look at his zone profile at the end of 2014—barring any more adversity-conquering missions in Memphis. For those interested, you can find Wong's zone profile here, but I will not be analyzing it. 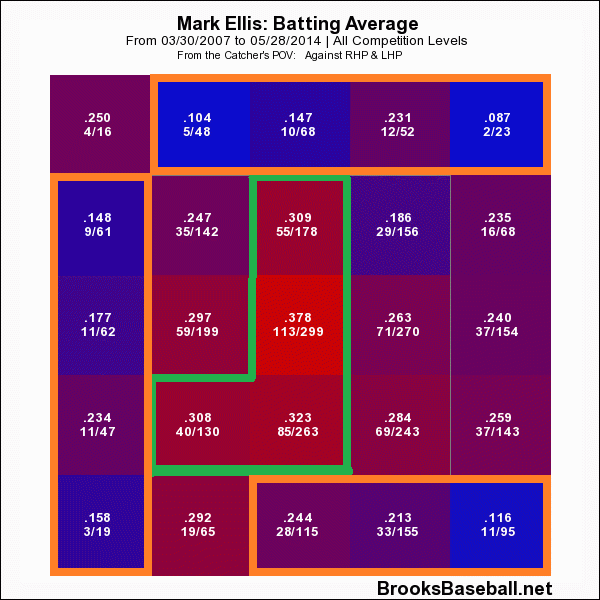 Bottom Line: Let's call Ellis' hot zone the "backwards L." Ellis is hitting .337 on pitches in the "backwards L" (outlined in green) since 2007. Considering the backbone of the L consists of three middle zones, this is not very surprising. However, as you can see, Ellis has three distinct cold areas as well (outline in orange). In these areas, he is hitting .181, and the particularly alarming area (to me, at least) is low, away, and out of the zone. The fact that he has had 365 at bats end on pitches in this area shows a particular weak spot for Ellis' hitting profile. Based on the very small sample size of this season, it appears Ellis is still going after these pitches far too often and not surprisingly, having very little success (one hit in 13 at bats). 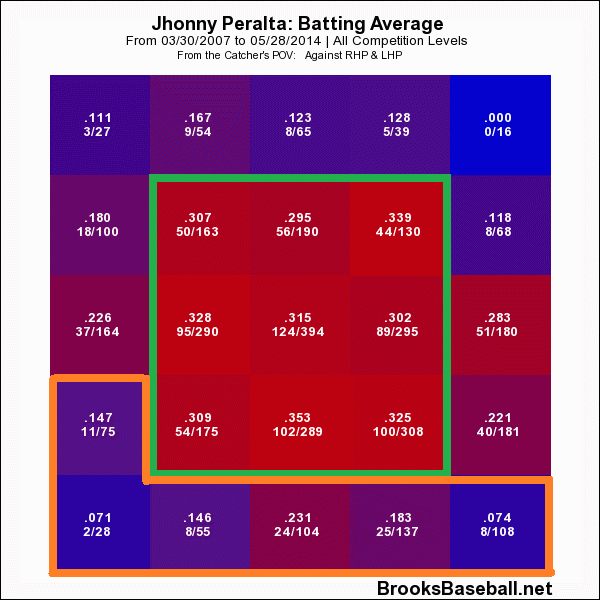 Bottom Line: Well, of the nine zones that make up the strike zone, Peralta has an average above .300 in eight of them, and the ninth zone is very close at .295. Overall, he has a .320 average on pitches in the strike zone. This clearly shows that he has particularly good plate coverage, but it also highlights that he is quite susceptible to chasing pitches out of the zone, considering his overall career average is .266. He is hitting a punchless .154 in the area outlined in orange since 2007, and he appears to still be swinging at a decent amount of pitches in this area in 2014. 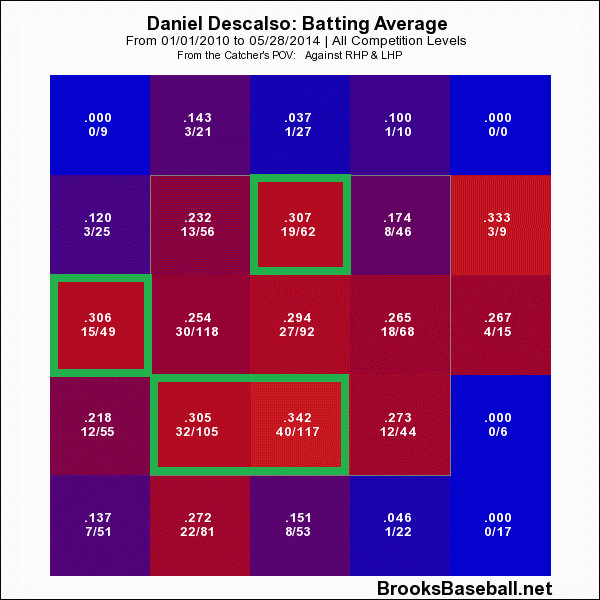 Bottom Line: In the strike zone, Descalso is not a terrible hitter, and in fact, he is actually a .318 hitter in the four areas outlined in green. Unfortunately, his hot zones are more than dwarfed by his cold zones. He is a career .239 hitter (not very good), and the fact that some of his low-to-mid-.200 zones have hints of red in them is not a good sign at all. Hitting zones of .218 and .232 should not have a hint of red in them, but with a career average of .239, this is necessary. Did you notice how I did not outline any areas in orange? That's because it would have looked too busy, and I would have basically been outlining the whole zone profile. In short, Descalso just is not very good at the plate. 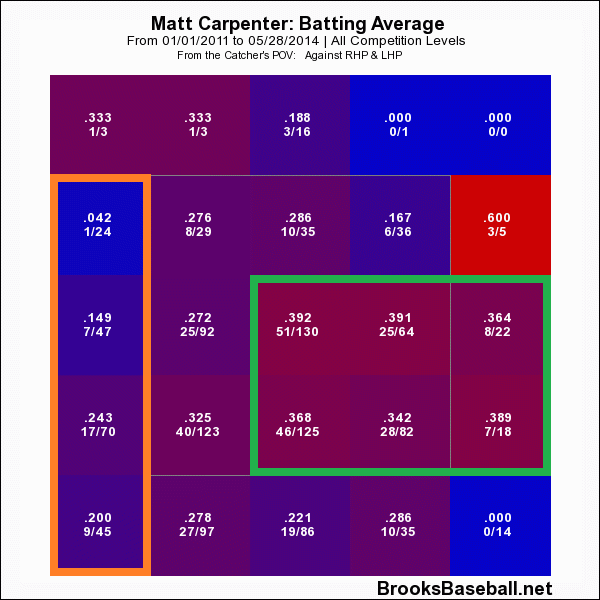 Bottom Line: Carpenter is particularly lethal (.374) in the area outlined in green. Basically, if a pitcher throws a pitch down the middle, inside, or even inside and off the plate, Carpenter will likely hit it quite well. However, as can be seen by the area outlined in orange, he is particularly vulnerable on pitches outside and off the plate. In that area, he is hitting a lowly .183, and pitchers have obviously done their homework because they are constantly attacking him there so far in 2014. If Carpenter is to return to anywhere near his near-MVP form from 2013, he will have to start laying off these pitches going forward. Then again, it would be quite helpful if umpires stopped expanding their strike zone with him at the plate.

Be on the lookout for a post looking at the hitting profiles of the outfielders at some point in the future.

Credit to BrooksBaseball for the data used in this post.