Cardinals win a wild game that featured a big strikezone, a few close plays at second, and a dominant outing by Wainwright.

LHP Pedro Feliciano has agreed to a minor-league deal with #Cardinals. Will report to Class AAA #Memphis on Tuesday. #stlminors #stlcards

Today's game was the 2326th regular season bout between the St. Louis Cardinals and the Cincinnati Reds. The Cardinals collected their 1200th win against the Reds all-time.

The last time these teams faced each other on May 25 was in 2001.  Andy Benes started the game for the Cards, but his brother Alan came up with the win thanks to Craig Paquette (yeah, that one), who knocked a pinch-hit 3-run homer in the top of the 9th.

In spants' series preview, she indicated that the Reds aren't the team they were last year.  The description reminded me very much of a description of the Phillies circa 2012 or so.

In the "guys who hit good section," spants warned us to be wary of Todd Frazier and Devin Mesoraco, who have both made some positive contributions to their team's chance of winning in this series.  On the pitching side, spants highlighted Johnny Cueto, who thankfully didn't have an impact on this series, Aroldis Chapman, and tonight's starter Mike Leake.  Leake doesn't walk many, he strikes out his share, and he gets a lot of ground balls.

Kolten Wong got things started with an infield single and a stolen base off of Mike Leake.  The throw almost got him at second base (it certainly beat him), but a faulty tag left the Hawaiian safe.  Matt Holliday probably got robbed on a ball-called strike, and the Cardinals put up a '0' in the run column in the first.

Adam Hamari, home plate umpire, became a factor in the game.  His strikezone was generous, especially inside to righties.  Holliday in the first, and Jhonny Peralta in the second, fell victim to inside balls Hamari deemed to be third strikes.  Here's a link to the strikezone map for those first two innings, if you're interested.  He continued his wide zone all night.  See the complete strikeout map below.

In the third, Tony Cruz scored the first run of the game.  He hit a single through the Frazier's wickets, got to second on a Wainwright sac bunt, and scored on a Wong single to center.  A review ensued on Wong's second questionable stolen base on the night.  Phillips did a nice job of blocking the bag, but Wong was able to sneak in under his leg.  The safe call on the field was upheld.  Unfortunately, the inning ended with Wong and Holliday standing on base.

Hamilton made a catch that only he and maybe Bourjos could've on a fly ball in the left-center gap to rob Wainwright of a double in the fifth.

The Cardinals didn't really threaten again until the sixth.  Adams singled and Craig walked to lead off the inning.  Peralta and Jay struck out (with some assist from the large strikezone).  Then Cruz put together a pretty good at-bat, ultimately driving an RBI single into right-center, scoring Adams to go ahead 2-0.  This was Mike Leake's final inning.  Leake's line: 6.0 IP, 7 H, 2 R, 2 ER, 2 BB, 8 K, 93 pitches thrown.

Manny Parra replaced Leake to start the seventh.  It was a crazy inning.  Matt Carpenter stretched a single into a double to lead it off.  It was yet another close play at second that went the Cards' way.  Wong sac-bunted Carpenter to third.  Holliday nubbed a little bouncer in front of the plate on the third base line, and Carpenter hustled in to score.  On the play, Mesoraco sailed a throw into the seats behind first.  In the end, Holliday ended up on second with an RBI single to his name.   Parra got the groundball he wanted from Adams, but he and Cozart botched a rundown in which they should have easily retired Holliday, the lead runner.  Exit Parra.  Enter Sam Lecure.  Craig singled to center, scoring Holliday.  Peralta flew out to deep center.  Jon Jay struck out to end the inning, Cardinals leading 4-0.

J.J. Hoover pitched the final two innings, only giving up one walk and one hit.

Adam Wainwright, fresh off his one-hitter, picked up where he left off.  He struck out Billy Hamilton and Brandon Phillips, and got Frazier to pop out to Wong in the first.

In the third, Waino allowed a one-out single to Zach Cozart, snapping a string of 23 straight outs, going back to his last start.  Later in the inning, he walked Hamilton.  Peralta made an excellent play up the middle to take a hit and likely an RBI away from Frazier.

Wainwright finally utilized the benefit of the wide strikezone in the fourth and fifth, using it to strike Mesoraco out looking in the fourth, and then again in the fifth by striking out Hamilton to leave Bryan Pena and Cozart on base, after back-to-back singles.

In the seventh, Mesoraco and Ludwick singled, but Wainwright left them on, retiring Pena, Cozart, and pinch hitter Skip Schumaker.

It was surprising to me that Waino hit for himself in the eighth and came back out, but it seemed to work out, as he had an easy 1-2-3 eighth and struck out two, totalling 12 for the night, which ties his career high.  His 0-1 pitch to Phillips was a 66-m.p.h. curveball.  In an earlier recap, I noted a couple 69 mph ones, but 66 is even more fun!  See the "VEB says" section for a suggestion on what that pitch may be called.  Also, this:

Randy Choate came in to pitch to Jay Bruce in the bottom of the ninth.  3 pitches, 3 strikes.  Day done.  Pat Neshek took care of the last two outs to end the game.  Cards win 4-0 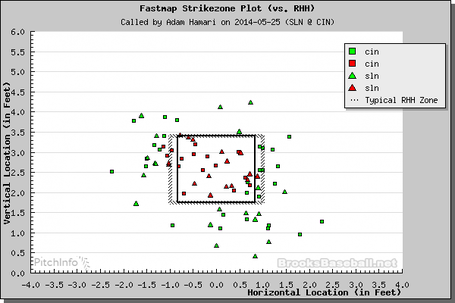 How do you define dominance? This is Adam Wainwright's SIXTH start this season of seven-plus innings and no runs allowed. #stlcards

Tune in tomorrow for a Memorial Day matinee as the Derek Jeter farewell tour makes a stop at Busch Stadium.  Chase Whitley will be opposed by Michael Wacha.  The fun begins at 3:15 CT.  It'll be on ESPN, again.