May preview, and Cubbies too

A trio of games at Wrigley signals the start of a new month for the Cardinals. Here's what's on the road ahead.

Share All sharing options for: May preview, and Cubbies too

If I were a Chicago Cubs fan, I'd be positively giddy about how 2014 has started. As I discussed the last time the Cardinals met them, the Cubs are unlikely to even reach mediocrity this year. Therefore, the most important thing for the 2014 Cubs is to work hard toward making the 2016 Cubs competitive. To that end, the progress of young stars Anthony Rizzo and Starlin Castro, who both struggled in 2013, is the most vital thing happening on the major league team this season.

(All data from fangraphs.com except FB distance from Baseballheatmap's tracker)
A single month isn't enough to declare anyone fixed, but there's an awful lot trending in the right direction for each player.
Travis Wood also has had a good start to the season. His peripherals track improvement commensurate with his 3.52 ERA, as he's posted the best K% and BB% of his career. His arsenal appears similar to what he's worked with in the past, so improved command is the likely cause, though his 2 best outings came against Arizona and Pittsburgh, whose offenses were positively Cardinal-esque in April, which sadly wasn't a good thing. Jason Hammel is off to a good start (2.08 ERA!). If you squint hard enough at his career, you can probably find some reasons for thinking the good start is real, but not many. Jake Arrieta is making his first appearance as a Cub after a minor shoulder issue. The 2 hurlers have years of mediocrity, many in Baltimore, between them.
Down on the farm, it's been a mixed bag. 3B Kris Bryant is doing very well in his first month at AA. SS Javier Baez is struggling a bit so far in AAA. He's not making enough contact, but still is hitting for power when he does. CF Albert Almora has had a rough time in high-A, yet to draw a walk, and Jorge Soler has been hampered by a bad hammy. Top pitcher CJ Edwards was off to a good start before hitting the DL with shoulder pain last week. The MRI was clean.

The Cardinals will run their home-away deficit up to 26 away vs 12 home at the end of their month-opening road trip, but then will be home every series from May 12-June 3 excepting a 3 game set at Cincinnati in the middle of that period.

There are a lot of poor to mediocre offenses here. Of all of those teams, only the Giants are in the top-half of their league in runs scored, so look for the Cardinals to continue their strong team pitching. On the other hand, this menagerie of opponents sports more of an even distribution in pitching and defense, ranging from teams with a strong claim to being the best (Atlanta) and worst (Arizona) at allowing runs.
Once again, there are a lot of divisional games this month, and the Cardinals share many common opponents with the rest of their divisional foes. However, the Pirates in particular appear to have a tough month ahead schedule-wise with the Dodgers, Yankees, Giants and Nationals all on the schedule and not a game with the Cubs or Diamondbacks in sight. At 10-18 entering May, they'll need a solid month to avoid getting buried by June.
This appears to be a month with plenty of opportunity for the Redbirds to put together a run, or at least build a margin by dominating 10 games against a pair of the worst teams in baseball. They can start today.

Seeing him struggle a bit in the majors, it's easy to forget just how consistently good was Kolten Wong throughout his career in the minors. It would be surprising to me if he doesn't hit well enough in AAA to work his way back up to the big leagues in the next couple of months, especially considering the strong support he apparently has from the front office. When that happens, I can't imagine a scenario where both Daniel Descalso and Greg Garcia remain with the club. Look for a true battle between the 2 players, and if Descalso continues his struggles at the plate (he's currently sporting a .125 BA & his wRC+ is 1, yes, 1), he might find the limits of Mike Matheny's ample trust.

I don't think Shelby Miller will be in the rotation June 1. He currently sports the worst FIP (6.19) in the majors among qualified pitchers. This is not the kind of pitching that can be outperformed in ERA for long, and as Joe pointed out this morning, there are some real concerns with the quality of his best pitch. I'm not sure what's wrong, but he's lost a lot of movement on the pitch he throws over 70% of the time since the heady days of early 2013. 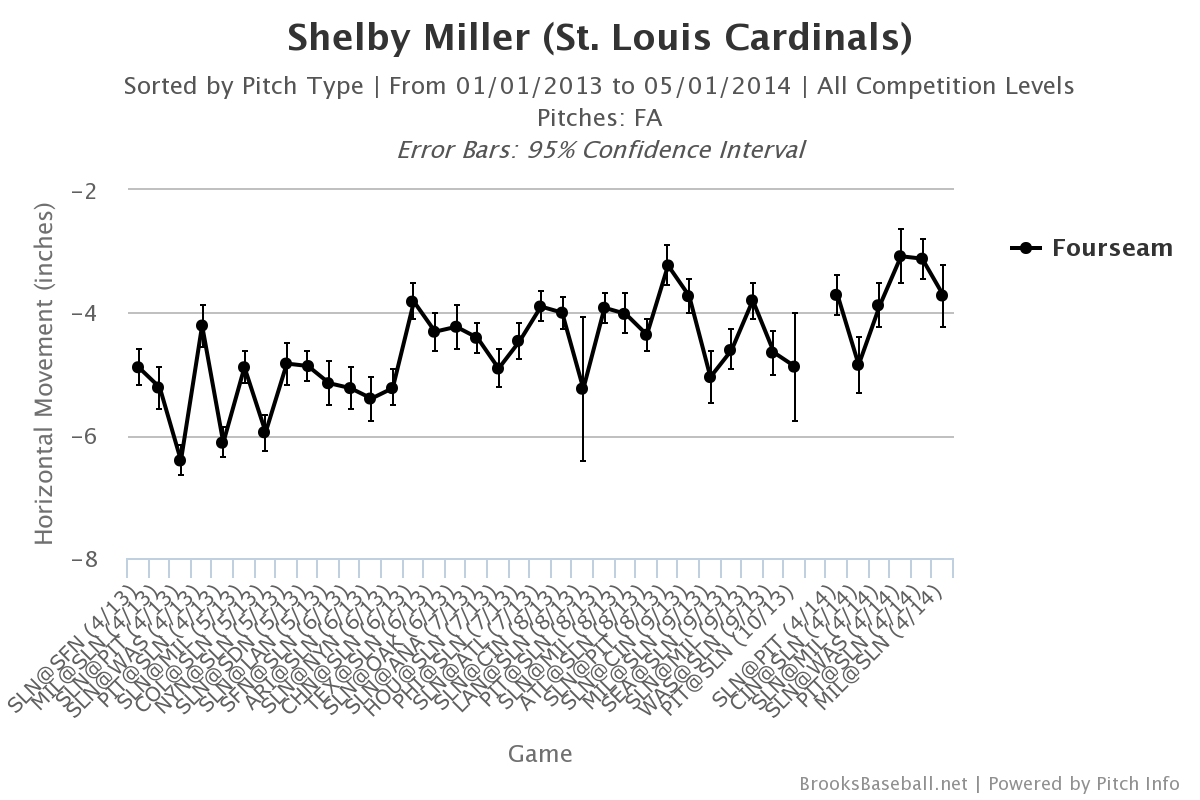 Mike Matheny showed late last year that Shelby has no iron hold on a rotation spot, and there are several options on the horizon. Joe Kelly should be returning shortly and Tyler Lyons has pitched fairly well. Tim Cooney isn't far off, and Jaime Garcia is set to make a rehab start this weekend. Just over a month ago, I wrote in the Over/Under Roundtable (which is already interesting to look back on), that "I'm bullish on a healthy and rested Miller this season." I don't know if he's healthy, but watching his K% and BB% converge under his HR/FB% has left me feeling awfully bearish about Shelby's chances of keeping his job without fundamentally changing how he's pitching.