To make room on the roster for today's starter, Garcia, #Cardinals option Rondon back to Memphis. #stlcards #stlminors

Motte to throw a bullpen today. Show arm for coaches. Active as soon as Tuesday if it goes well, as scripted earlier this month. #stlcards

Today's game was the 2045th regular season bout between the St. Louis Cardinals and the Pittsburgh Pirates. By winning today's game, the Braves close the gap in the lifetime series to 1067-960.

The last time these teams faced each other on May 18 was in 1997.  Tom Glavine led the Braves to a 5-1 victory over Andy Benes and the Cardinals. Ron Gant's solo homer provided the only Cardinals run.  Fred McGriff and Jeff Blauser each collected 2 RBIs in the Braves victory.  Glavine pitched a complete game.

Obviously, this game's importance is centered around the return of Jaime Garcia, who will toe the rubber a year and a day after his last appearance, before he and his shoulder decided they couldn't pitch anymore.  One surgery and some setbacks later, Garcia has had a few successful rehab starts in the minors, and is cleared for ~95 pitches today.  In his last rehab start for AAA Memphis, Garcia threw 74 pitches through five innings, giving up three hits (including a home run), two walks, and two earned runs.  He struck out five.

In fink's season preview, he used some lovely descriptors of what good Jaime looks like.  He also highlighted Kolten Wong and Peter Bourjos, who have seemingly won back the favor of their fickle manager for the time being.  They have been key cogs in this series so far.

Garcia's first pitch of the 2014 season was a 91-m.p.h. 4-seamer to Jason Heyward that was fouled off.  He seemed to make some good pitches.  With two outs, Freddie Freeman went down and knocked a low 2-seamer out of the park to left-center.  It took Jaime 18 pitches to get through the first.

He retired Andeltron Simmons, Dan Uggla, and Gerald Laird in quick fashion in the second, using 11 pitches to do so (29 total).

Garcia kept it going.  He retired Jordan Schafer, Floyd, and Heyward quickly in the third, using 8 pitches to do so (37 total).

Justin Upton led off the fourth by cracking a monster homer into the left field seats, making the score 3-2.  Then Freeman took a fastball in the back, which apparently the Braves took exception to and retaliated for in the bottom half.  Wong started a pretty double play.  Jaime used 8 pitches to get through the fourth (45 total).

Going into the sixth,

The bullpen is still. Garcia about to face hitters who have drilled him, third time through order, but he has 30 pitches to give. Concern?

Mr. Goold was right to raise the question.  Garcia struck out Floyd to begin the inning, but then Heyward singled. J. Upton doubled, and Freeman drove them home to tie the game 4-4.  Upton's double was questionable.  The liner landed in foul ground, but the third base umpire Ron Kulpa determined that it went over the third base bag in fair territory.  The three hits in the inning were sharply hit, all to left field.  Jaime started a nice double play to end the inning.  He used 13 pitches in the inning (72 total).

Kevin Siegrist and Pat Neshek teamed up to take care of the Brave's eighth inning.

In the bottom of the eighth, Danny Mac surprised everyone by telling us that Trevor Rosenthal was warming in the 'pen.  Rosenthal had pitched the previous three days in a row and five out of the last seven days.  He'd thrown 93 pitches in that time. The decision did not work out as planned, but probably as expected .  Freeman singled.  Rosie got the next two out, bringing up pinch hitter Ryan Doumit (who I was surprised to find out still existed).  Doumit doubled to the right field corner.  Then came two walks in a row- an intentional one to Evan Gattis and then a game-tying one to Schafer.  In the eighth pitch of the at-bat, Rosenthal threw a 98-m.p.h fastball at the knees of Schafer.  It was close, and the call went the Braves' way.  Here's the Brooks Baseball srikezone map: 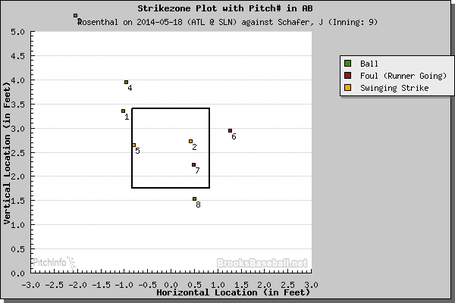 Carlos Martinez came in to try to preserve the tie game with the bases loaded (in a double switch, bringing in Mark Ellis).  Martinez sent his second pitch to the backstop, allowing Doumit to score what would prove to be the winning run (6-5).  Martinez steadfastly refused to leave a base empty, so he walked Ramiro Pena before finally ending the nightmare inning via a Heyward groundout.

To lead off the bottom of the first, Floyd allowed a single and a walk to Matt Carpenter and Wong, respectively, but the 3-4-5 batters of the Cardinal's order weren't able to cash in.

In the second, Matt Adams rocketed a line-drive single off of the wall in right field, but was erased in a double-play off the bat of Jhonny Peralta.  Then Bourjos reached base in one of my favorite ways.  He swung through a strike-three cutter that got away from Gerald Laird.  According to wikipedia,  "In Japan, this is called furinige (振り逃げ?), or "swing and escape". In Major League Baseball, it is known as an uncaught third strike."

Garcia then helped himself by singling to the left side.  Floyd walked Carpenter on four straight pitches to set up the Cardinal's offensive play of the game.  Kolten Wong whacked a 92-m.p.h. fastball into the left field corner for a bases-clearing double to take the lead 3-0.  As yoshifan points out, "Apparently, all three of those runs scored against Floyd are unearned." because of the whole dropped third strike thing.

Floyd decided to send a message (I guess?) in the fourth.  With one out, nobody on, he hit Jaime with a pitch.  It was fairly blatant, as discussed various people in the gamethread.  It took Floyd three tries, but Jaime finally took one in the side, eliciting a warning to both benches by home plate umpire.  Garcia and Freeman were able to discuss their differences when Jaime was on first.

The Braves utilized the replay system in the sixth.  After Matt Holliday singled, Allen Craig grounded into what should have been a double play.  On the turn, Dan Uggla's throw pulled Freddie Freeman off the bag at first.  The Braves thought he got back to the bag in time to get the out.  The call that Craig was safe was upheld after review.  Craig later scored after a Yadier Molina single and a sac fly from Matt Adams.

Matheny elected to send Garcia to hit for himself in the bottom of the sixth with a runner on, which was a bit curious.  Mathenaging aside, Garcia needs to work on his bunting.  He popped up two bunt attempts, and failed to move Bourjos into scoring position.  Garcia was the last batter that Floyd faced.  Floyd's final line: 5 1/3 IP, 7 H, 4 R, 1 ER, 3 BB, 4 K, 95 pitches thrown.

Alex Wood finished the sixth for the Braves.  He came back for the seventh.  It got a little crazy.

Molina drove a single up the middle with one out.  With two outs, Peralta drove a pretty routine fly ball to center field. Jordan Schafer lost the ball in the sun and let it drop.  Molina hustled all the way around to score from first, aided by some miscommunication on the relay throw.  Peralta ended up with a charity double.

David Carpenter worked around a Matt Carpenter single and a Wong HBP in the eighth.

Craig Kimbrel came in to close the game for the Braves in the ninth.  Adams got to second base on a single and a wild pitch, but he was left there to end the game, Braves winning 6-5.

Tune in Tuesday as old friends Bronson Arroyo, Dave Duncan and Tony LaRussa bring the Diamondbacks to town (I don't know if the latter two are actually coming to town, but you know what I mean) come to take on Adam Wainwright and the Cardinals.