Share All sharing options for: Game Recap: St. Louis Bests Atlanta At Baseball 5 Runs to 2 on 5/16/14

Am taking a bit of a less linear depiction tonight for the game recap. I didn't even make any notes, like I usually do, or work on the article concurrently. I just wanted to sit down and watch the game without delays or whatever, and that's kinda what I did (unfortunately, the kinda means I was chatting on the gamethread or with friends on fb, but I did have the game on the whole time; I just missed a few things, like Bourjos and Matheny being ejected).

Also missed most of the commentary tonight, had the music going on over the game. VEBeer consisted of 2 Brothers Prairie Path Golden Ale, 4 Hands Divided Sky Rye Ipa, Tower 10 IPA, St. Arnold Spring Bock, Lakewood Till and Toil, and a homemade IPA, as well as several whiskeys. So it was a pretty good night at VEBar.

The Cardinals matched the festivities with 13 hits as well as 3 stolen bases. Kolten Wong made his return look great with 2 hits and a stolen base. He did leave a man on base though, so if Matheny is truly hypercritcial of Kolten, then I guess that could be a point of minute contention. I would guess/hope that is not the case though.

Matt Adams lead the team tonight in total bases with 4. All of the Cardinals usual big guns drove in a run: Molina, Holliday, Adams, Craig. Honestly, the Cardinals looked more confident tonight than they have in a while. It was good to see the offense bust out a bit. Sure, if they were up against a more potent offense than ATL, 5 runs may not have  sufficed. But tonight, it was +3 runs.

The Braves did not exactly go quiet into the 60 degree spring night, with 8 hits. They tried to steal a base, but failed. The Cardinals were not caught stealing with a net 3 stolen base count. On pitching, Lance Lynn fought through a line drive off his foot most of the night and toughed it out in a rather effective outing.

The guy is remarkably consistent, and oftentimes his (over)reactions are probably on a perfectionist level for him; whereas many view it as him being flustered or feeling defeated due to his body language. I think a great majority of the time this is not the case. He just may not have the best poker face or is spoiled by run support.

Speaking of pitching, the bullpen tidily picked up both a hold and a save, by Carlos Martinez and Trevor Rosenthal. Pretty much everything went according to plan for the Cardinals tonight, save for the ejections. Even that could be seen as a victory of sorts, Matheny sticking up for Bourjos.

Mike Matheny will be following Peter Bourjos to the clubhouse. He's also been ejected, had to be restrained by first-base ump. #stlcards

The red triangle off the left of the zone is the one Bourjos was punched out on. 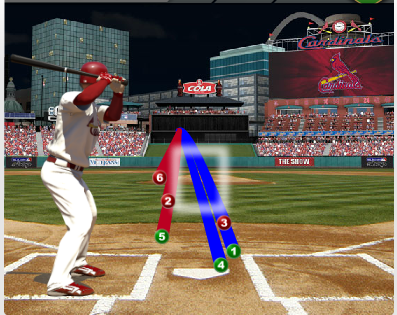 If you think he should have swung at that, then we should just agree to disagree.

He's supposed to know it was going to be a terrible call ahead of time!

So yeah, I think Mike and Peter may have bonded over that one. Pretty bad call.

As one can see, this was a pretty tightly contested battle, until the fifth inning. Matt Carpenter and Kolten Wong singles set the table for a subsequent Matt Holliday double, good for a Matt Matted In (MMI).

The Braves loss (especially in WPA) lies at the feet of Ervin Santana, who has usually been really damn good this season. Freddie Freeman also let his team down with his clutch performance, or lack thereof. Allen Craig and Yadier Molina were the Win Probability stars for the Cards tonight, a familiar thought. None of the Cardinals pitchers exhibited much WPA save for perhaps Lynn, who outlasted a hurt foot and gave up a hit per inning and 2 earned runs. An honorable mention goes to Holliday with a .169 WPA rating.

The Braves seemed a not very scary competitor Friday night. Tomorrow, the game begins at 1:15pm featuring the Harangatang vs Shelby. Be there!

Mathenaging: "I loved to see the fire and the fight that Peter showed there. Frustrated and knew a couple of pitches didn’t get called to what he thought was the strike zone in big situations. You can’t take the emotions out of these guys."

p.s. there were no photos from tonight's game available at the time of this posting, am using what was previously available. also, here's a late night/early morning jam