The moment you all have been waiting for has finally arrived. Fate intervened to allow me to finally recap a Michael Wacha start. Let's do this thing.

It looks like Nate Schierholtz's struggles at the plate were grounds for benching as the left handed batter does not get the start in right field against the right-handed throwing Texan on the mound for the Cardinals. John Baker will be behind the plate putting Welington Castillo on the bench.

Peter Bourjos gets another start in centerfield while his average starts to climb. Mark Ellis will start at second with newly recalled Kolten Wong on the bench. Although he is healthy, this could be a result of lingering effects of his illness, so I will reserve judgement for now. Allen Craig and Matt Adams swap places as Craig goes to sixth and Adams to fourth in the lineup. This puts the Natural Mattrick in play with the possibility of Matt Carpenter, Matt Holliday, and Matt Adams all scoring on the same play. Another bonus: the postponed game yesterday might have saved us a Yadier Molina offday, as he caught all 12 innings on Tuesday.
Today's game has one of the top N.E.R.D scores today, mostly because Michael Wacha is pitching and he is a 10.
Michael starts the game looking dashing in the home whites with a nine pitch at bat to pesky Cub leadoff hitter Emilio Bonifacio. This would eventually lead to a groundout to third baseman Matt Carpenter. He makes quick work of Ryan Kalish with a groundout to second baseman, Ellis. Anthony Rizzo bunts for a hit against the shift to get on base and Starlin Castro gets a two out knock to bring up Luis Valbuena. Nobody cares though as Valbuena flies out to Holliday to end the threat. Wacha is working quickly and confidentially.
Matt Carpenter steps up to the plate to the pleasant sound of "Long, Hot Summer Days", per usual. Also per usual, Carp works a 3-2 count after quickly getting 2 strikes and then gets called out looking on a questionable strike three call. Jhonny Peralta also goes down on strikes, also looking, but thanks to the beloved #ButtCam, I was unable to tell if it was questionable or not. Matt Holliday also strikes out. Let's get it going, guys, come on. On the plus side, all the strikeouts worked Hammels for 17 pitches.
***
In the top of the second inning we learned something very interesting about Kolten Wong. First of all, he has a fiancé, but second of all, someone in the front office said he will receive significant playing time. It appears Operation Free Kolten Wong is a go.
In the bottom of the second Molina gets the first hit off Cy Hammels, stinging a double off the wall in right field. Allen Craig follows that up with a walk, taking some pitches with two strikes that in previous plate appearances we would see him strike out on. This brings up Gorgeous Bourjos with one out and two men on. Matheny sends the runners on 3-2, but it would be for naught as PB works a 3-2 walk. Bases are loaded for Kolten Wong Mark Ellis. Ellis would get an RBI groundout to the right side that almost found a hole, but didn't, getting gobbled up by second baseman Valbuena. AND THEN MICHAEL WACHA GETS HIS FIRST HIT OF THE YEAR LINING ONE UP THE MIDDLE TO SCORE TWO. 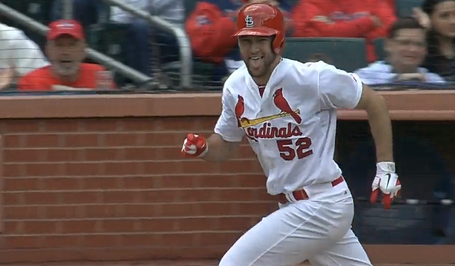 Courtesy of my personal hero, adommin
Matt Carpenter sends the first pitch he sees in the second to the wall in right for a double, scoring Michael. Peralta grounds out to Valbuena to end the inning, but not before the Cards take a 4-0 lead.
RMI: 1 (Carpenter)
You think Michael Wacha works quickly now, give him a four run lead. I need to splash my face with some cold water. One second.
In the bottom of the third, Mike Matheny chooses to challenge the closest play at first I have ever seen, with Matt Holliday hustling, but called out at first. The call would stand. The Cards go down 1-2-3.
Rizzo is a buttface and bunts himself on - again - then scores on the Castro homerun. haiofiajfajdgbjiafheajdnam!
Valbuena singles with no one out, bringing up Junior Lake. Lake strikes out, and Mike Olt then grounds into a inning ending double play WHAT JUST HAPPENED? "Don't worry about that error, Matt [Adams]," Michael says, "Imma just put this team on my back and strike the rest of these jolly fellows out." And that he did.
After a nice catch by Allen Craig in rightfield, Michael ran into some trouble in the top of the sixth, with two men on and one out, but was able to work out of it with an inning ending double play (that we didn't screw up!) off the bat of Olt.
Matt Holliday goes to work in the bottom of the sixth, rocketing a 3-2 Hammels's pitch to right center and hustling all the way, legs out a double. He then tags up on an Adams flyout to advance to third with one out. Hammels is on the ropes. Molina puts him out of his misery, scorching a single down the third base line and scoring Holiday. Yadi was unable to advance to second with Junior Lake throwing the ball in quickly. This would be a break for the Cubs as Craig rolls over on a pitch into an inning ending double play.
MBI: 1 (Holliday)
Everyone held their breath in the top of the eight as Kevin Siegrist walked Rizzo, gave up a base hit to Castro, then walked Valbuena to load the bases with one out. With Junior Lake up,  Matheny went to Trevor Rosenthal to get out of the jam. Whatever this bullpen's aversion to 1-2-3 innings is over, we need to get it figured out. I cannot take much more of this. Rosie allows a sacrifice fly to cut the Cardinal lead to two, then of course, walks the bases loaded again, but is able to escape with a broken bat groundball to Ellis off the bat of pinch hitter Schierholtz. On the bright side, Rosie did hit 99 mph, so if you were worried about velocity, you needn't.
We were all pretty nervous about Trevor coming back out for the ninth, so naturally he threw an uneventful 1-2-3 ninth. Cards win 5-3.

LIL SCOOTER'S PLAYER OF THE GAME: 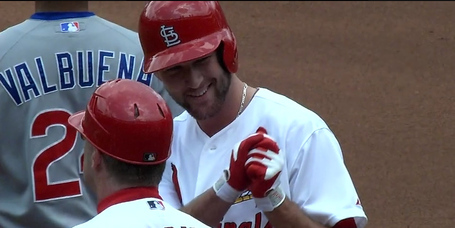 Is there any doubt who this is? Of course it is the lovely Michael Wacha. Wacha would go 7 innings, giving up 2 runs on 7 hits with 5 strikeouts and no walks. He would also go 1-2 with a base hit and two RBI pushing his WPA to .332. 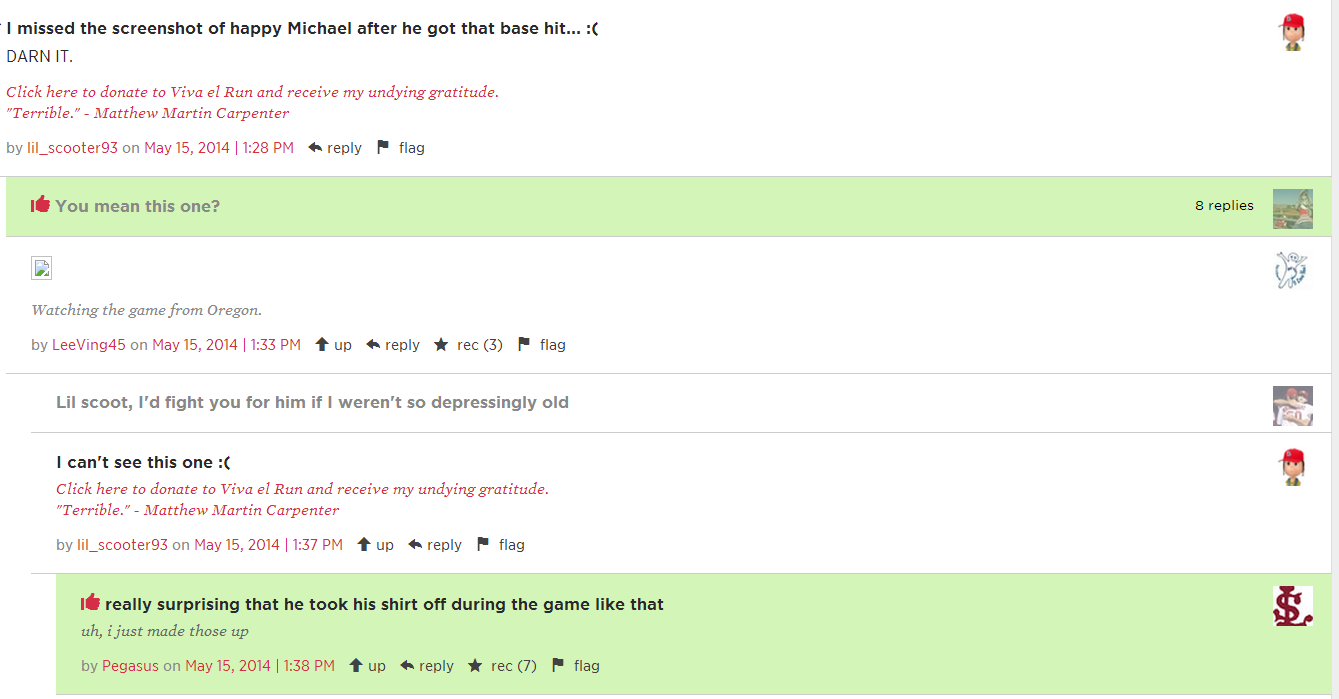 Tomorrow Lance Lynn will match-up against Ervin Santana of the Braves. Santana shut out the Cubs his last time out and looks to go 5-0. Gametime is 7:15pm on Fox Sports Midwest and KMOX.