The past six years have seen an increase in the number of strikeouts throughout baseball. Different proposals have been made to change rules to make them more friendly to hitters, but expanding the number of teams could produce a similar effect if baseball were to end its long drought and bring baseball to new cities.

Share All sharing options for: Could expansion decrease strikeout rates?

Strikeout rates have been increasing over the past five years. The rise of the strikeout has not gone unnoticed. At the beginning of last season Dave Cameron at Fangraphs noted many articles on the subject and wrote

Pretty much all of them hit on the same general points, with a continuing focus being on the change in approach among hitters. Each writer notes that the rise of statistical analysis has taken some of the stigma away from the strikeout, to the point that a hitter who strikes out 150 or 200 times per year is no longer considered to be an offensive black hole.

Cameron goes on to note that hitters are generally swinging at the same number of pitches they always have, but that there are more called strikes than before on the remaining pitches. Rising strikeouts is a relatively new phenomenon. As the graph below shows, strikeout rates have fluctuated some over the years and really taken off over the last six seasons. 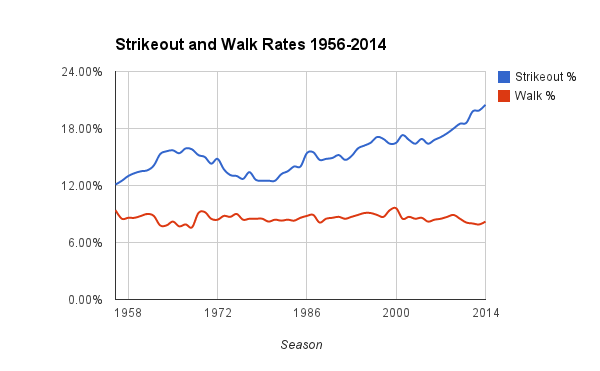 Walk rates have remained fairly static. Increased strikeouts has not come with increased walks. I enjoy strikeouts quite a bit, but seeing the ball put in play more often is more enjoyable baseball. Rob Neyer has been beating this drum for years. His most recent column on the subject discussed different rule changes and how to reverse course on the current strikeout trend.

I think you simply have to start with the pitchers. Physically, you're not going to slow them down; in fact they're just getting faster. While there might be a natural limit - maybe it's practically impossible to throw 110 miles an hour - we know that more and more pitchers are hitting 100 when that figure was once extraordinarily rare.

He proposes lowering the mound and deadening the ball, but I do not think those are the best way to decrease strikeouts. He has the right idea to focus on the pitching, but I think there is a much more effective solution. Expansion is definitely a drastic solution, and if decreasing strikeouts was the only goal, not the best solution, either. Whether baseball needs expansion is probably another topic for another day, but I think with baseball's massive increase in revenue from television as well as attendance, putting additional teams in Portland, Montreal, San Antonio, New Orleans, or another team in New York would be of great benefit to the game.

I am not willing to say for certain that strikeouts would go down with expansion, but there is some evidence pointing in that direction. In looking at the graph above, the first round of expansion in 1961 and 1962 when baseball increased from 16 teams to 20 did little to curb strikeouts as rates rose slightly throughout the sixties. However, strikeout rates went down throughout the seventies when four teams were added in 1969 and two more in 1977. During this time the mound was lowered and the designated hitter was added to the American League which no doubt contributed, but adding six teams helped to dilute the talent base of the pitchers. The 1980s showed a small rise which leveled off somewhat after two more rounds of expansion in the 1990s. As Dave Cameron noted in the piece linked above, strikeout rates remained roughly the same from 1996-2007.

Correlating the time periods around expansion is not exactly convincing evidence, but logically the principle is sound. An argument could be made that adding a batch of hitters would make just as much of a difference as adding pitchers, but the talent level currently below the majors refutes that argument. In 2013, there were 165 pitchers who pitched at least 80 innings and 316 hitters who had at least 250 plate appearances. Below that pool are the players who would receive more innings and plate appearances were there expansion in baseball.

Using the ZiPS projections available at Fangraphs we can get a pretty good idea of how those players would be expected to perform at the major league level. Taking a look at the hitters, sorted by wOBA, hitters 325 through 375 are projected to strike out at a rate of 20.7% (the number is roughly one percent lower using only the first 25 players in that set). The number is in line with the current rate this year of 20.5%. Using the same tactic with pitchers, keeping 80 innings as the minimum and sorting by WAR (using K/9 as strikeout percentage is difficult to determine from the data), we find that pitchers 175 through 225 are projected to strike out roughly 6.7 hitters per nine innings. In 2014, the current K/9 rate is 7.9. Adding more pitchers may not make a huge dent in overall strikeout numbers, but it is a step in the right direction.

Baseball has now matched it's longest drought without expansion since it began more than 50 years ago. There may be some concerns about diluting the talent level, but I am not overly concerned given the influx of talent this sport has seen over the previous decades from around the world. The glut of Tommy John surgeries are unfortunate, but they are also a reminder that pitchers now can continue careers where a generation ago they would have been cast aside. Bill James has said fans would scarcely notice the difference in the level of play with carefully managed expansion (see discussion here).

Calling a better strike zone, lowering the mound, and deadening the ball are all options to increase the number of balls in play, but the simplest solution without changing how players play the game is to expand the number of teams and increase the number of pitchers in baseball. Unfortunately, it is also the most difficult solution to pull off. Adding new teams takes years and massive expenditures on facilities, but it would add incredible excitement to the game and one positive byproduct might be slowing down the increase in strikeouts we have seen over the past half-dozen seasons.