Yesterday, the Cardinals placed Tyler Lyons on the disabled list with a shoulder strain. Disregarding the injury, let's revisit his struggles on Monday night to see where he went wrong.

Share All sharing options for: Breaking down where Tyler Lyons went wrong

When Joe Kelly went down with an injured hamstring, I wrote an article titled: "What we can expect from Tyler Lyons in the rotation." If you haven't checked it out and have some time, I encourage you to do so. If you do not have time to read it in its entirety, and I completely understand if this is the case, I will summarize it for you: In short, I said that in order for Tyler Lyons to be a successful big league pitcher, he must rely on pitch location and take advantage of above-average movement on each of his pitchers. That statement is nothing groundbreaking or anything.

Well, considering both his fastballs average around 90 MPH, he cannot bank on blowing away hitters with pitches up in the zone. In fact, it is actually in his best interest to avoid those zones as much as possible. Thus, in the article, I proposed a target range of 35-40% of his fastballs falling in the middle to upper zones (boxed in yellow). Let's take a look at where his fastballs were on Monday night: 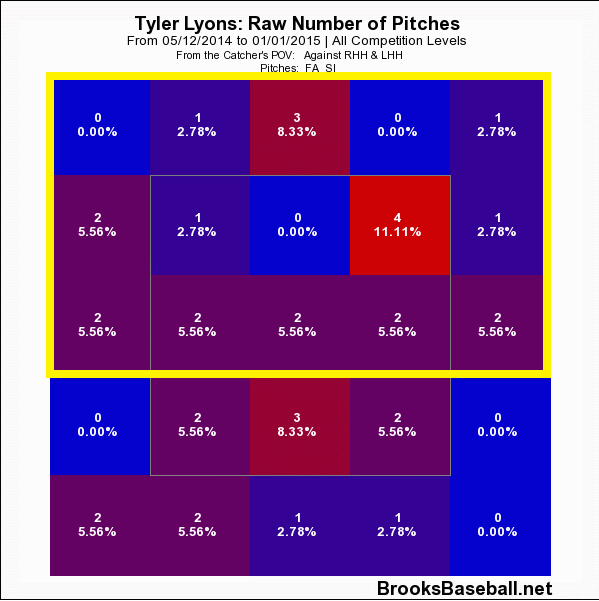 Instead of the 35-40% target range I was looking for, Lyons threw an alarming 63.92% of his fastballs in the zones boxed in yellow. That's not ideal. He was just placed on the disabled list with a strained shoulder, so there was likely a change in either his fastball velocity or movement, right? Wrong. Both his fourseam fastball (90.02 MPH) and sinker (90.05 MPH) had velocities consistent with his 2014 averages. His fourseam fastball had similar horizontal movement to his season average, and his sinker actually averaged more horizontal movement at 9.99 inches per pitch. What about his vertical release points? Those were all pretty consistent to his yearly averages as well. This leaves us with the issue of poor fastball location which has already been documented visually and numerically above.

How did the Cubs fare against his poorly located fastballs on Monday? Two words: Incredibly well. According to BrooksBaseball, 11 of Lyons' fastballs were put in play and a whopping six of them resulted in hits (a .545 average). Unfortunately for the Cardinals, these were not harmless, seeing-eye hits either. Of the six hits he allowed, two were singles, two were doubles, one was a triple, and one was a home run. These hits were obviously major contributors to the nine earned runs he allowed despite only having four innings pitched.

Now on the disabled list with a reported shoulder ailment, one wonders when (and really if) we will see Lyons in the starting rotation again. If you missed it on Twitter yesterday, John Mozeliak noted that either Jaime Garcia or Tim Cooney will likely fill the void left by Lyons. Considering Cooney is not on the 40-man roster and Joey Butler took the last open spot, I think the club is pretty likely leaning toward Garcia. If all goes well for Garcia, and I obviously have my doubts, there won't be any room for Lyons. Plus, with Kelly finally expected back in June, the MLB roster situation will be even more complicated for Lyons. I like Tyler. I really do, but until he is able to successfully and consistently locate his fastballs down in the zone, he will not be a successful major league pitcher. He will get poor results like he did on Monday night and will not give his team a chance to win.

Special thanks to BrooksBaseball for the data used in this post.