Cardinals vs Cubs Recap 5/12: Lyons digs hole so deep he reaches Descalso at the bottom of it; Cards lose 17-5

Share All sharing options for: Cardinals vs Cubs Recap 5/12: Lyons digs hole so deep he reaches Descalso at the bottom of it; Cards lose 17-5

Before this game started, Fangraphs had the Cardinals' odds of winning as 62%--but things did not work out as predicted.

Specifically, the main thing that did not go as predicted was the Cardinals' pitchers allowing twenty (20) hits and seventeen (17) runs. The Cardinals in turn did not score nearly as many runs, and thus they lost the game.

As depressing as the night no doubt was for some fans, I thought the game was so absurd for so long that it exited the realm of competition and became pure, entertaining proof that the Gods of Baseball sometimes extend their hands directly into random Monday-night games in May.

At any rate, here's Tyler Lyons's line for the night, in bold so that all may see his folly:

And for balance, here is a picture of Tyler Lyons looking contrite: 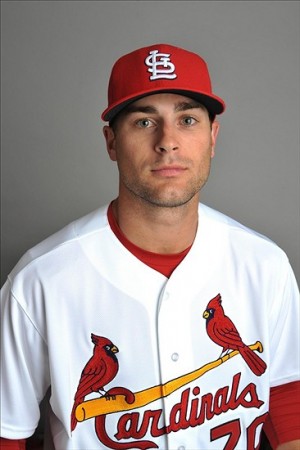 So he's sorry, okay? He'll do better next time.

These things happen every season. Literally every season! Huge, lopsided losses. Huge, lopsided victories. Sometimes world-class ballplayers play poorly against opponents who play both very well and with fantastic good fortune, and yet it doesn't indicate a physical or moral failure. It's a loss in the books--but it's just one loss.

In the ninth inning, Randy Choate faced the entire Cubs roster past and present and gave up dozens and dozens of hits. While we lament that Choate stank up Busch Stadium so powerfully, we also might recognize that (1) he had a bad night but is not usually a terrible pitcher; (2) part of his poor showing arose from his facing several right-handed hitters; (3) HE WAS SO BAD THAT WE GOT TO SEE DANIEL DESCALSO PITCH.

After Randy Choate gave up his fiftieth-consecutive hit with two outs in the ninth, Matheny finally tired of messing around and summoned Dirty Dan to secure the final out of the inning. So Dan smiled, warmed up, and faced a literally-licking-his-chops Mike Olt. And now Descalso's pitching arsenal is no longer theoretical to us, for here is how he disposed of Mike Olt: 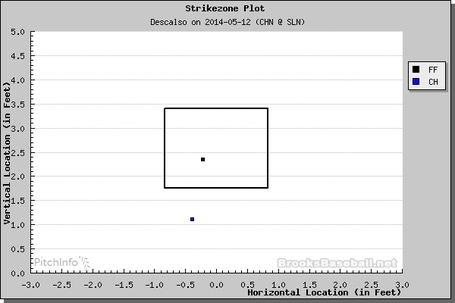 Descalso threw an 85.5 mph four-seam fastball and an 86 mph "changeup," and Mike Olt just COULD NOT HANDLE IT. He flied out to left, ending the inning.

The Cardinals went down in order in the ninth, and the game was over.

Lay your head down on this WPA chart: