Cubs at Cardinals series preview: May 12-15

Starting this evening, the Chicago Cubs visit the St. Louis Cardinals for a four game series. The Cardinals pitchers will look to take advantage of weak Cubbie batters, and several Cubs pitchers will hope to thwart regression for another day.

Share All sharing options for: Cubs at Cardinals series preview: May 12-15

You guys, Aaron Finkel is lazy. LAY-ZEE. He also couldn't think of anything interesting to say about the Cubs (12-24), who the Cardinals (19-19) are already facing for the third time this season. So, he asked me to fill in for him. But I'm feeling kind of unenthusiastic about facing the Cubs. They're not going to contend. They're rebuilding. They're probably going to trade Samardzija. Javier Baez exists, waiting... waiting...

Oh my! I'm receiving some sort of... booming loud audio transmission? Hang on.

SPANTS, THIS IS NOT WHAT WE AGREED TO.

I know, Ben, er Overlord, but there just isn't much to say! It's only May. It's the Cubs. Hey, where is your voice coming fr—

[ominous whisper] Do you know what happened to the last person who disobeyed one of my orders?

No, sir. I don't know what happened to them.

Um, so, under the threat of disappearance—

Travis Wood and Tyler Lyons tonight at 7:15 Central. (This game will be on ESPN.)

Jake Arrieta and Adam Wainwright face off tomorrow at 7:15pm.

Jeff Samardzija and Lance Lynn wrap up the series Thursday afternoon at 12:45.

Some Guys Who Hit Good

The Cubs are not a good team, though it looks as if at least one player's talent is becoming more fully realized: Anthony Rizzo is For Real. He currently has 144 wRC+, good for 1.1 fWAR. He walks at a healthy 15.3% rate and his strikeout rate is only 15.9%. He's got a .200 ISO. Not too shabby! Sure wish the Cardinals had a first baseman hitting like Anthony Rizzo... (sigh) But I digress.

Welington Castillo has clubbed 4 home runs already and is poised to best his career high mark of 8 in 2013, though right now he sits at a cromulent 98 wRC+.

Some Guys Who Don't Hit So Good

After those guys, Travis Wood - yes, Travis Wood the pitcher - is the next best hitter on the Cubs with a 95 wRC+. (It's funny but then again, Adam Wainwright currently leads all Cardinals batters with a 166 wRC+. So.)

Emilio Bonifacio has gotten a lot of (mostly fantasy) hype so far this year, but his 91 wRC+ is hardly hype-worthy. However, a significant amount of Bonifacio's value comes from his defense and his base running, and we all know that those skills can win games. (You hear that, Matheny?)

Luis Valbuena likes to take walks (17.1% walk rate) and strikes out a fair amount (24.8% strikeout rate). Valbuena also has a 29.5% line drive rate, but currently sits at 90 wRC+. He doesn't hit for power and his BABIP is a bit low at .283. With his skill set, if he had a higher BABIP, Valbuena would be Matt Carpenter (2014 4-cylinder model, with the base level trim package).

These Cubs simply aren't hitting well. In fact, every other Cubs hitter has been worth 81 wRC+ or below. Every other Cubs hitter has also been worth negative WAR. Lack of offensive skill is almost entirely to blame. Much of this can be chalked up to the roster make-up. This is not a team built to win. It's a team built to sustain some smattering of fan interest (read: ticket sales), a team designed to compete within the letters of MLB law. However, it's also not a roster long for this world. There's going to be a lot of roster churn at Wrigley over the next few years, with several talented players, led by Javier Baez and Kris Bryant, due to make their debuts and try to ruin our lives. (And our livers.)

Some Guys Who Pitch Good

Travis Wood is looking like a better pitcher than he was in his 2013 breakout season. He's striking out more guys, giving away fewer walks, and he doesn't have an unsustainable strand rate. His BABIP-against is even a little high at .341. I think he'll probably be handsome enough to frustrate the Cardinals batters.

Jake Arrieta has had stellar results in a 9.1 inning sample size this season. He throws hard enough, he doesn't really walk people, he has a healthy ground ball rate (and a way above career norm GB-FB ratio). He's kind of a less sexy Carlos Martinez. However, hitters have a .406 BABIP against him. Arrieta also hasn't surrendered a home run this season. I started off thinking that he was doing really well, but I now see him as a candidate for regression. But man, Dave Duncan would've had a field day with this kid. (In Bizarro World, Cardinals pitching coach Dave Duncan is currently turning Carlos Martinez into a less sexy Jake Arrieta.)

Jason Hammel strikes out some batters (20% strikeout rate), but he really doesn't walk anybody (5.6% walk rate). His BABIP-against, however, is only .203, and his strand rate is about 10 points higher than his career average. His success can't continue, right? Right?

Jeff Samardzija is an interesting pitcher this year. He's got a 1.45 ERA, but is also outperforming his FIP, which is still an attractive 2.90, and his xFIP, which is 3.45. He's both striking out and walking fewer guys this year. He's also been stingy with home runs. I suspect his ERA will inflate once he starts giving up home runs again. Samardzija also has an unsustainable 84.2% strand rate, not to mention an unsustainably awful hairstyle.

Neil Ramirez (who?!) is a guy. He's got a 50% strikeout rate. He has a miserly 5.6% walk rate. Yes, he's only thrown 4.2 innings and faced 18 batters. But 9 of them have struck out! Will Ramirez stay this good? He almost definitely won't. Don't care. He's a reliever to know for this series.

Some Guys Who Don't Pitch So Good

Jose Veras was terrible. Dude had a 9.12 xFIP. Unfortunately for Cardinals batters, he was recently demoted to Double-A.

What We Said Then

Follow these links if you want to see what Overlord and The Red Baron had to say about the Cubs during VEB's preseason coverage.

Lastly, behold this beautiful (shut up, yes it is!) Cubs throwback uniform: 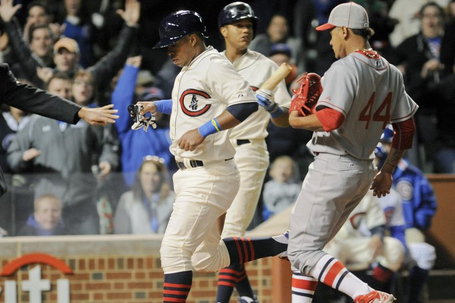 The Cubs should always wear them.