Yadier Molina and swinging at the first pitch

Yadier Molina swings at the first pitch a lot, and that's okay.

Share All sharing options for: Yadier Molina and swinging at the first pitch

Saturday was VEB Day at Busch Stadium, and we packed into the ballpark to watch the St. Louis Cardinals take on the Pittsburgh Pirates. The Cards were giving away a Yadier Molina replica jersey at the gates, as well. It seemed like the giveaway could not have been better timed, what with Molina was riding a 13-game hitting streak coming into the game. But the MVP candidate went 0 for 4 and posted a -.201 WPA (thanks to stranding six baserunners), which tied starter Tyler Lyons (who allowed four runs in six innings) for the worst on the team.

During the game and after, some Cardinals fans questioned Molina swinging at the first pitch during one of his plate appearances. This is not an uncommon occurrence when a Cardinal swings at the first pitch and makes an out, so I thought it might be interesting to dissect Molina's plate approach on the first offering he sees from the opposing pitcher and see how it compares to MLB as a whole.

The first pitch of a PA represents a fine line. In nearly all situations, a batter doesn't want to take the pitch with the bat resting on his shoulder. The reason? It's really hard to reach base safely after falling in a 0-1 hole. During the offseason, we looked at the importance of the first pitch from the pitcher's perspective. Here's the graphic I put together for that post: 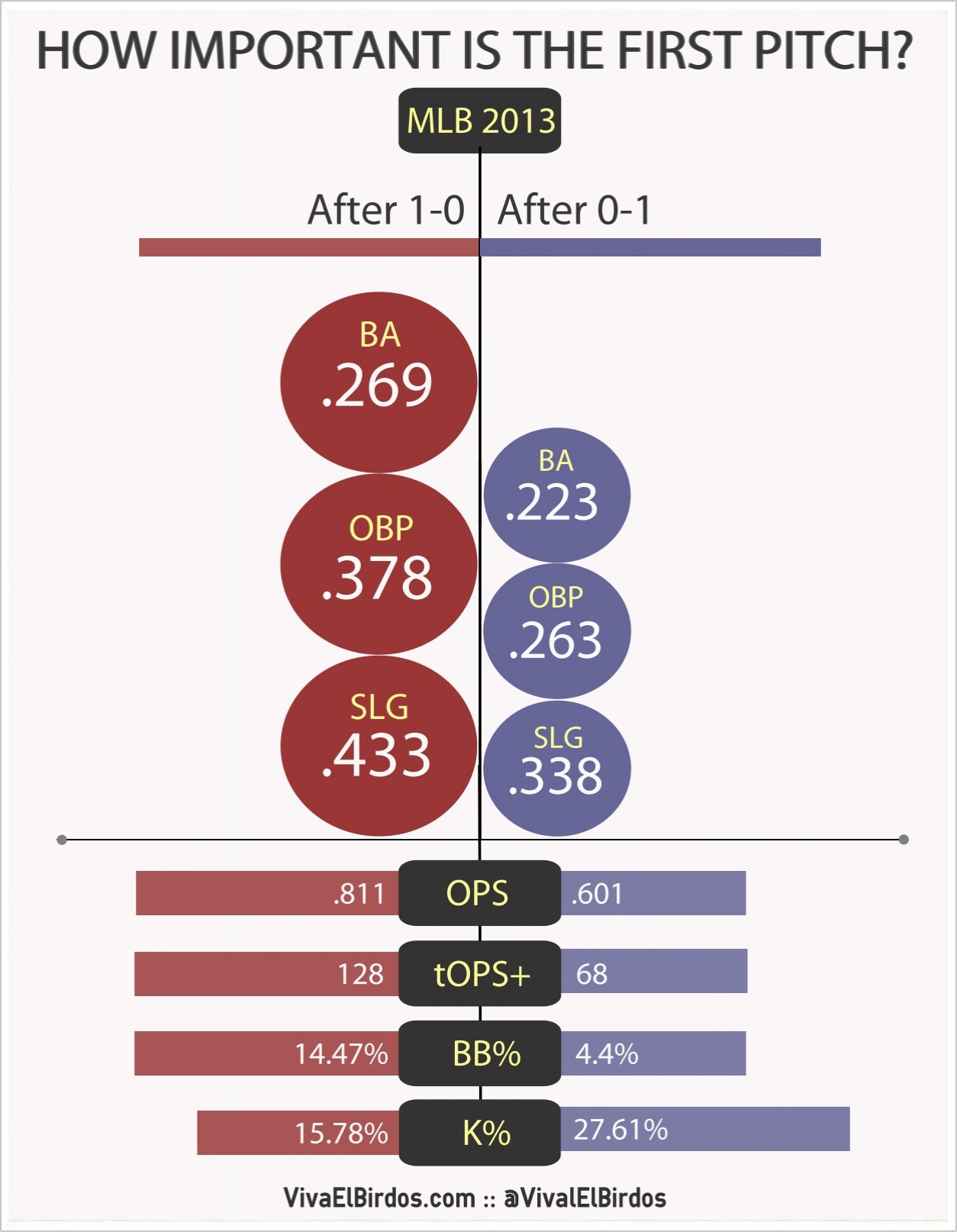 It's just as important for the hitter to avoid an 0-1 count as it is for the pitcher to force one. And the benefit of going 1-0 for the batter adds another wrinkle. Batters want to be aggressive in the zone, but not chase a pitch that would have given them the leg up of a 1-0 count had they had not swung.

I'm going to focus on 2012 and 2013 because these are the most recent years and also represent Molina's ascendance as a batter. As Molina has evolved into a top-tier batter, he has adopted a plate approach that errs on the side of swinging when it comes to first pitches. In the last two seasons, Molina has had the two highest first-pitch swing rates of his career: 44.4% in 2012 and 44.5% in 2013. For MLB as a whole, the first-pitch swing rate was 28.8% in 2012 and 27.5% in 2013. So, for the last two seasons, Molina has been far more aggressive when it comes to hacking at the first offering from a pitcher than MLB batters were as a whole. Was he successful when swinging at the first pitch?