Share All sharing options for: April's effect on Allen Craig and Yadier Molina

Entering the season, the Cardinals had four hitters predicted for above-average but not great production. Yadier Molina and Matt Adams have exceeded expectations, Matt Carpenter has slightly under-performed while Allen Craig has been a huge disappointment. Much was expected from the Cardinals offense this year, but overall the Cardinals' hitters have undewhelmed. While the start is not without meaning, for most of the Cardinals, the expectations for the rest of the year should look pretty similar to the expectations at the beginning of April.

After Matt Holliday, the Cardinals had four hitters projected by ZiPS to be above average. Molina, Adams, Carpenter, and Craig were all projected to have a wOBA between .330 and .350, roughly 10-25% above the average hitter. So far, the results for the Cardinals have not matched up with their projections.

As much as Molina has been exceeding expectations, Craig has been below them. Before his barrage yesterday, Craig's wOBA was sitting at a wretched .250. Even one month into the season, one good day can cause great fluctuation in numbers. The Cardinals have a pretty wide spread from expectations, but that is not unusual. This season, there are fifty players with at least 50 plate appearances and a projected wOBA between .330 and .350 according to ZiPS. So far, the results have run the gamut. Below is a histogram showing how many players are in each 15-point increment. 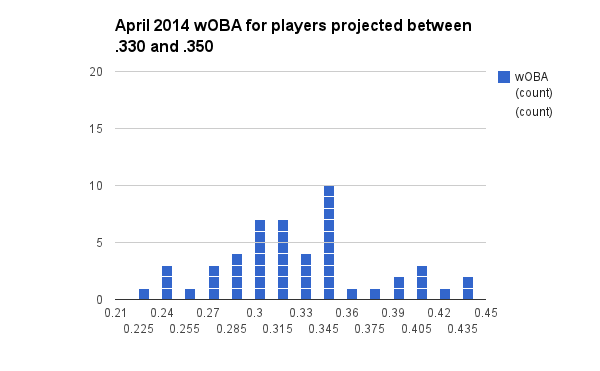 There is a bunching towards the middle, but there are also some big outliers towards each end of the spectrum. I chose the projection point at between .330 and .350 to isolate players who should be good hitters and match up reasonably well with the Cardinals quartet. We see similar results for players in April 2013. Note: I could not find wOBA ZiPS projections for 2013 so I used a rough estimator ((1.75*OBP+SLG)/3). While not perfect, it provides the same general type of player as above. 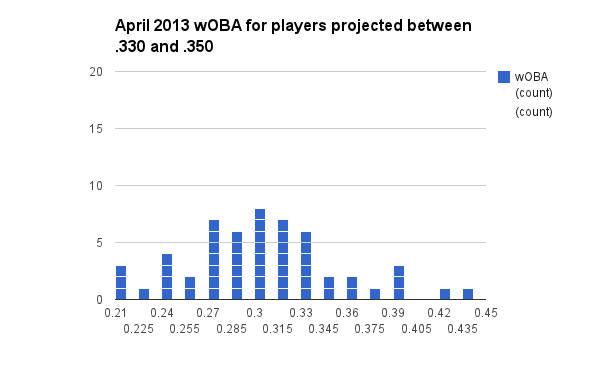 Again, we see some bunching towards the middle, but there are a bunch of outliers at both ends. While we do not know how the players from 2014 will end up, we do have the results of the players in 2013. 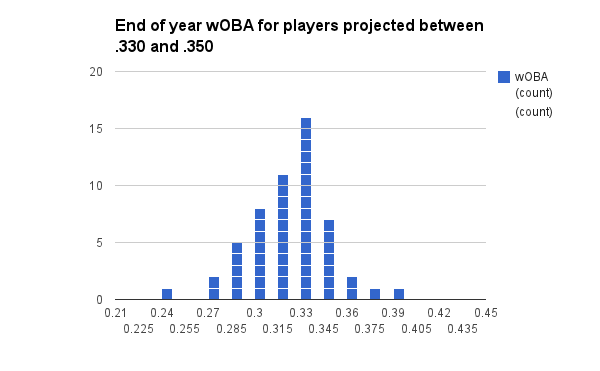 Each of the charts are set to the same scale, and it is difficult not to notice how much the end-of-season wOBA moved to the middle. Focusing on April statistics is only natural when that is all we have to look at after a winter without baseball. No matter how much we tell ourselves this is only a small sample size, we want to draw conclusions from the information we have. If a player is getting poor results, there could be a tendency to watch at bats and see something different, to notice some sort of struggle. There may be something different about a player, but odds are, if there is something different and its worse, someone will notice and it will get corrected. On the other hand, if a player is playing great, expect pitchers to notice and make adjustments. At the end of the year, the player is probably going to be pretty close to expectations from the beginning of the season.

Not every player will find himself at his projection at the beginning of the year. In the chart above showing final 2013 numbers, 34 of 52 players were between .315 and .360, but that means one-third of the players were either well above or well below expectations. It is possible that Craig does not recover or that Molina keeps hitting his way to an MVP, but more than likely those players will end up pretty close to where they were expected at the beginning of the year.

The first month does have some significance. In a really interesting piece at The Hardball Times about creating projections systems, Dan Szymborski wrote about in-season projections.

This does not nullify everything I wrote above. The starts do matter, but not in a major way. Molina's projection has gone from a .334 wOBA up to .348 for the rest of the season. Despite a less than stellar start to the season, Carpenter's rest of the season projection has actually gone up to .338, a very slight increase, perhaps due to his high on-base percentage and a slugging percentage that is bound to improve. Adams' strong start has resulted in a small increase to .341 while Craig's disappointing start has led to a rest of the year projection (before yesterday) of .336, a drop of ten points (Edit: now .340 after yesterday). Despite a nearly 100 point wOBA drop below expectations during the first month, Craig's rest of the year projection fell by only ten points.

Craig's season has thus far been a disappointment while Molina has again been one of the best players in baseball. Molina is not likely to keep up his incredible start, but Craig is not likely to keep performing like Pete Kozma, either. As those players move towards the center, the rest of the disappointing Cardinals' hitters will likely improve, lifting the Cardinals offense closer to expectations. Every time the Cardinals' offense struggles is a reminder of their poor start, but as the season moves forward, the Cardinals' successes on offense should heavily outweigh their failures.