Shelby Miller and the Cardinals lost to the Cincinnati Reds 4-0 this afternoon, managing only four hits against Mike Leake and being subjected to a terrifying individual performance by Reds center fielder Billy Hamilton, who reached base four times and stole two bases, scoring twice.

On the bright side, it was a beautiful, sunny day in St. Louis, and the Cardinals took two of three from a division rival.

Through three innings Shelby was the fireballing pitcher with great command that we all fell in love with: his fastball had movement and he was spotting it down in the zone, but he was also throwing a tight curveball for strikes, even getting Joey Votto looking at a backdoor curve in the first inning.

In the fourth, however, Shelby's command of both his fastball and his curve deteriorated. He left too many pitches in the middle of the plate, and just scroll down to see what major-league hitters will do with such largesse.

Here are two scatter-plot graphs, the first one of all pitches thrown by Miller today: 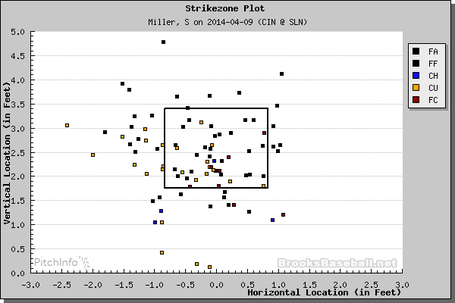 And the second, a plot of the final pitch of each plate appearance, with results included: 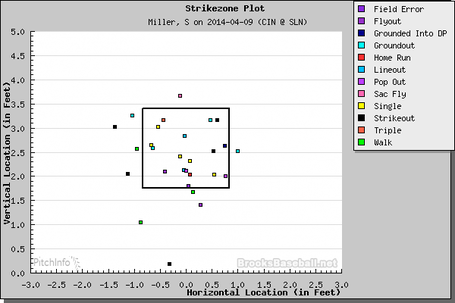 Again, the two things we knew about Hamilton before the season began: (1) He's fast as Achilles; (2) his ability to get on base is suspect. In the season opener he struck out four times and looked just wretched at the plate, and I laughed and laughed and laughed. Today, Hamilton hit a triple, reached base four times, stole two bases, and scored twice--and lo how mine eyes have been opened.

Hamilton's season OBP before the game was .130; after, .250. He tripled in the first and bunted for a hit in the ninth. He stole second like he was going downhill. In the fifth, Hamilton walked and then got such a great jump on Shelby that Yadi, who knows his Epictetus, was all,

You can be invincible, if you never enter a contest where victory is not in your power.

After stealing second, Hamilton then proceeded to de-pants Jon Jay in front of the entire stadium, first taking third on Brandon Phillips's shallow fly ball to right, and then scoring easily on a shallow pop fly also to right. Here is where Jay was standing just after he called off Kolten Wong and right before he caught the ball: 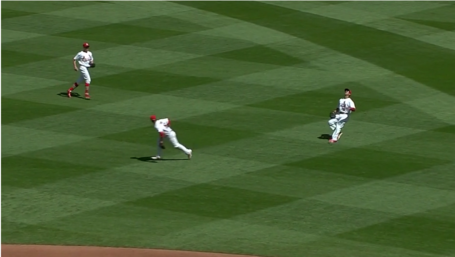 Notice! That is the infield dirt there; Jay's throw home is not far. But notice also that Jay's momentum is inexplicably going away from home plate. Hamilton scored easily.

In his series preview, Aaron answered the question "Devin Mesoraco: Who the hell is that?" thus:

...the point is that this team desperately needs to find another impact bat, and outside of a late-career renaissance by Phillips or Luddy, or an unexpectedly fruitful maturation of Frazier, the only place they might find that is Mesoraco.

Mesoraco came off the DL on Tuesday after recovering from an oblique injury, and his bat so far has been most impactful. In his eight PAs, he has an OBP of .500 and a SLG of 1.125. Shelby struck him out in the second inning. In the fourth, Mesoraco took a middle-middle 93mph fastball and turned it around for a two-run homer. This is the location of the home-run pitch: 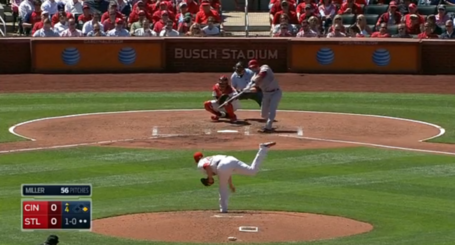 Mesoraco also singled on a line drive to left in the sixth inning.

The Reds pitcher entered today's game with a career 4.35 FIP and groundball rate of 48.9%. Today he threw his sinker and curveball well, keeping his pitches down and getting 14 groundouts versus three flyball outs (with a .182 BABIP overall). 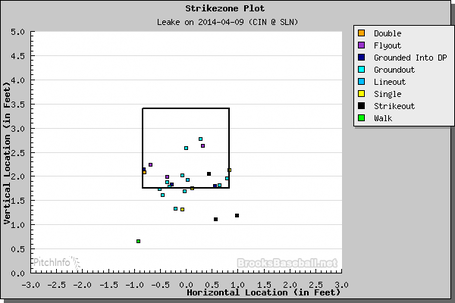 Leake threw 52 sinkers and 29 breaking balls in his eight innings, giving up zero runs, and you can see above how many plate appearances ended on pitches down in the zone. Hitters see a middle-middle pitch and begin to swing, but what they make contact with is a ball down in the zone. Ground balls and double plays ensue. Fans gnash their teeth. 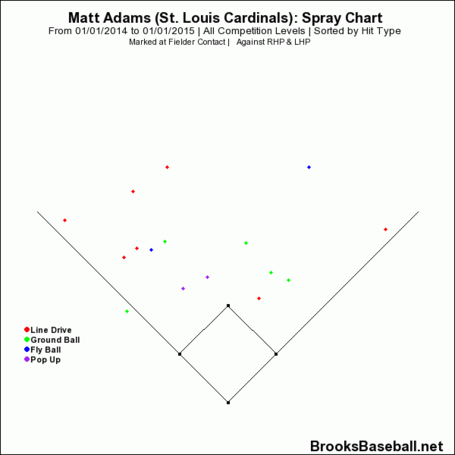 In summary, Devin Mesoraco's home run decreased the Cardinals' chances of winning from 53% to 28.1%, and the rest was chiseled away by Mike Leake.

Thursday is an off day for the Cardinals. On Friday begins the first Cards-Cubs series of the season, in St. Louis, with Joe Kelly facing Jeff Samardzija at 7:15 central.