Cardinals at Pirates Recap 4/4: The Buccos Come Out Swashbuckling To Begin The Series

Characteristic of, or behaving in the manner, of a swashbuckler. Swashbuckler: a swaggering swordsman, soldier, or adventurer; daredevil.

Share All sharing options for: Cardinals at Pirates Recap 4/4: The Buccos Come Out Swashbuckling To Begin The Series

The Cardinals have endured their share of delays this year, over 6 hours already of waiting to play in this young season. This can screw with one's head. Tonight was no different, another rain soaked waiting game to begin the Cardinals season series vs Pittsburgh.

Not far into the game, Shelby Miller is crushed by Pedro Alvarez, revisiting his Cardinal killing ways of 2012. The home run was just a solo shot though, so it was not that big a deal. But Miller labored in the early going. He reached 50+ pitches before the 3rd inning was over. Miller didn't have it all together in his first start.

In the fourth inning the Cardinals failed to take advantage of a chance with the bases loaded. Peralta flew out. Oh, what could have been.

At times, Shelby was able to paint the corner and didn't look too bad. His velocity was topping out at 94mph, but he didn't have his offspeed stuff under his control. On his 67th pitch, he gave up his third home run of the night to Ishikawa (why do I feel that this guy is going to be annoying? dumb gut response).

In the fifth inning, Matt Carpenter zinged one out of the park on a down-the-middle pitch by Cole. The cute part was when a kid that had already acquired a home run ball from Ishikawa gives the MCarp home run ball to a young girl around his age. A heartwarming moment before the game went south.

Things got out of control in the 6th inning. Actually, the wheels fall off. Choate, Maness, etc. These guys are not always going to be able to be effective. Mid-bullpen crisis.

Gerrit Cole was in control tonight, but had a .217 BABIP against. The Cardinals just didn't have their luck going for them tonight, and Cole did. Here's the WPA graph for this "meh" game: 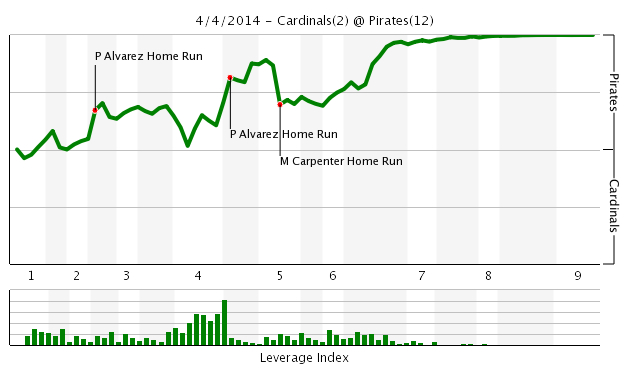 I did not get to experience the game in "real time", but I did still take a look at the gamethread. johnorpheus mentions that Shelby's mechanics seem messed up... which begs the question, are they? I detect a narrative going on this season re: Shelby Miller and mechanics.

The win wasn't in the Cards tonight, but the Pirates could have potentially scored the rest of their runs for the series. At least, I hope it's like that.

On Saturday, it's Joe Kelly vs. Francisco Liriano.