Share All sharing options for: Cardinals at Reds Recap 4/3: Lynn and Cards defeat Homer Bailey and Reds 7-6 despite rain, Reds

After nearly four hours of rain delay and down three runs after the first inning, Lance Lynn and the Cardinals came back to beat the Reds in Cincinnati, 7-6, on Thursday night.

Despite home runs from both Jay Bruce and Todd Frazier in the bottom of the first, Lynn recovered to produce a good though brief line: 5IP, 8H, 3ER, 7K, 1BB. His counterpart on the Reds, Homer Bailey, put up a line of 4.1IP, 7H, 4ER, 3K, 3BB. Pat Neshek gave up a three-run homer to Todd Frazier (his second of the game), while Trevor Rosenthal closed the game with a four-out save.

In a game that was exhilarating and frustrating in turn, the Cardinals claimed their first series victory of the year.

The first inning was fertile ground for those skeptical of Lance Lynn. After Joey Votto reached base (which he did all three times he faced Lynn, because he's Joey Votto and he has preternatural bat control), Jay Bruce launched a 449-foot home run into the right field seats.

Here's the scatter-plot graph of Lynn's confrontation with Bruce: 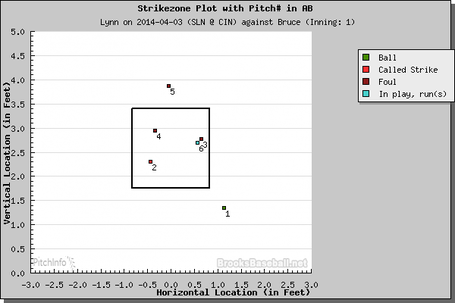 Pitch #6 was the 88-mph slider of Jay Bruce's dreams: Here was the result. And here's the very next batter, Todd Frazier, hitting a 474-foot home run. It was a rough inning, no doubt, and Lynn's command was inconsistent. But again, notice that Lynn's actual final line was respectable.

With Matt Carpenter and Jhonny Peralta on base in the top of the seventh inning, Matt Holliday hit a fastball as far to right-centerfield of Great American Ball Park as one can possibly hit it without producing a home run. The ball hit the top of the outfield fence, 380 feet from home plate, just beyond center fielder Billy Hamilton's reach, and bounced back into play, where right fielder Jay Bruce caught the ball before it hit the ground. Home run? Out? Nope: single.

Here is how close Holliday came to hitting a three-run home run: 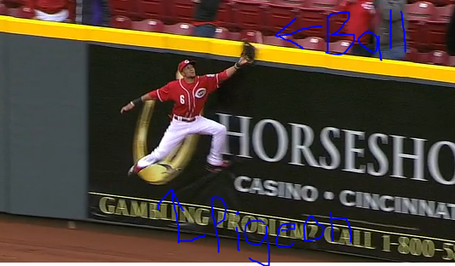 Let us once again marvel at the vagaries of this lovely game. Also, clock that daredevil pigeon.

When Hamilton came up to bat in the bottom of the eighth inning, with the Cardinals up by one run, he was 0-4 with a strikeout. He had in fact not yet reached base even once this season. It's also worth noting that the two things everyone knows about Billy Hamilton are (1) he's fast as Achilles but (2) there are mighty doubts about his ability to hit in the major leagues.

Given these facts, here is what St. Louis Cardinals relief pitcher Pat Neshek did:

Only one pitch-result option over there on the right, folks! A four-pitch walk, to the most dangerous baserunner in the major leagues, representing the tying run, in the eighth inning.

Thank goodness for Trevor Rosenthal, who was finally summoned by Matheny and promptly struck out Brandon Phillips to end the inning. He then retired Votto, Bruce, and Frazier in the ninth to secure the series victory for the Cardinals.

An eventful day for Big Mayo, and a very encouraging one overall. Adams went 3-5 with two doubles and a single. He hit so well against the shift, in fact, that the Reds abandoned it after he lined two hits to left field. In his next PA (with regular alignment) he lined a hit into right field. Hitting line drives to both sides of the field is one way to increase your FtS+ (adjusted F that Shift percentage). Ben Lindbergh has written about beating the shift, including how Adam Dunn adjusted his approach in the face of aggressive shifts. For those wondering if Smash will try bunting against the shift this year, it's worth considering that his player type is more Adam Dunn than Norichika Aoki.

On defense: While he committed no errors, he did do this one notable thing: Tracking a popup into foul territory, he nearly caught the ball while reaching into the stands, but a fan caught it instead...then Adams kinda shoved the fan, the fan waved it in Matt's face, and the fan flipped Adams off. It's possible Reds fans have a new reason to dislike the Cardinals, and a new hero, too.

Here's the Win Expectancy Chart. It does a good job of both showing the relative arc of the game and quantifying the advent of VEB's frustration with Pat Neshek:

Note that Matt Holliday's Win Probability Added (0.335) was by far the greatest positive contribution of any Cardinal--and that with a 380-foot single and a 403-foot out.

After the game, the Cardinals were scheduled to fly to Pittsburgh, where the Pirates and more cumulonimbus thunderheads await. Game time tomorrow is 7:05 Eastern at PNC Park, Shelby Miller and Gerrit Cole facing off.