Thar be lopsided pitching matchups on the horizon!

-We get an exciting series opener tonight when Shelby Miller and Gerrit Cole go at 6:05.

-Joe Kelly (bless him!) matches up against Pirates ace Francisco Liriano tomorrow at 6:05. Kelly has his work cut out for him. Yes, Liriano is a lefty. No, that's not particularly concerning. He's a good pitcher, and that is what's concerning.

-We flip the starter teeter totter Sunday at 12:35 with our heavy, Adam Wainwright, pitching against Edinson Volquez, who was effectively wild in 2008 and just wild ever since.

You know the Pirates story. Or you know your version of the Pirates story. Since I was born in 1980, my version of the Pirates story is this: They were really good when I was at an age where their being good mattered a lot. I remember that outfield of Barry Bonds, Bobby Bonilla and Andy Van Slyke more clearly than I can remember any non-Cardinal outfield of the decade that followed their run atop the NL East (1990-1992). I remember that they lost to the Braves twice in 7 game playoff series, Barry Bonds left for a lot of money & San Francisco, and the Pirates didn't have another winning record until last year. That's the story. I was happy they were good last year, and if they had beaten the Cardinals, I probably would have halfheartedly rooted for them to win the World Series. 20 consecutive losing years is just too damn long, and Andrew McCutchen is toward the top of my favorite non redbird players to watch. Anyway, of course I want the Cards to frequently and thoroughly beat the Pirates. I just want the Pirates to be a good team when that happens.

This Pittsburgh team is similar to last year's, but they lost AJ Burnett and signed Edinson Volquez (more on him later). They can afford some drop-off there if 2013 rookie and late-season star Gerrit Cole can be outstanding immediately and throughout the season. It appears within his reach. On offense, they lost late-season acquisitions Justin Morneau and Marlon Byrd, leaving unattractive platoons currently at first (Gaby Sanchez and Travis Ishikawa) and in right (Travis Snider and Jose Tabata). It's ugly. Russell Martin continues to anchor the defense, Pedro Alvarez will probably hit some more homers and do nothing else well, and Neil Walker remains one of their most valuable players. This is an offense that finished 15 runs below league-average last season and looks worse at the start of this one. They need McCutchen and last season's offensive breakout Starling Marte to shoulder whatever their pitching cannot.

Francisco Liriano, Gerrit Cole, and Charlie Morton are the rotation's anchors. They'll need Wandy Rodriguez, Edinson Volquez, and Jeff Locke to contribute as well. At least they have a good defense behind them.

You can read more about this off-season's holding pattern in Ben's piece here, and take a look at the expected help from their minor league system here.

Some things to watch for

Aside from having one of the best names in baseball, Edinson Volquez is interesting because he was really good one year (2008) and has always had showy stuff. Volquez isn't the worst pitcher a team could pull out of the free-agent end-bin, and the Pirates were quite successful with last year's reclamation project of a guy with stuff. But Francisco Liriano's prior good season was better and more recent than Volquez', and his ensuing days in the wilderness were less bad.

Volquez always struck out plenty of batters, but he has also always allowed a lot of walks. From 2009-2013, only Jonathan Sanchez had a higher BB% among starters. Last season, split between San Diego and Los Angeles (Dodgers), he posted the first sub 10% BB rate of his career, but this was offset by the worst K-rate of his career. This spring, he struck out 12 batters in 14 innings, but he walked 7 and allowed 3 home-runs. While he's one of those guys who can be brilliant every once in a while, I have a hard time imagining a good season from Volquez. We see him Sunday in his first start as AJ Burnett's replacement, and he appears to be no replacement at all.

Last season, the Pirates earned a reputation for successfully implementing aggressive defensive shifting. Matt Adams was an obvious candidate for the strategy, and beating it was something he reportedly worked on this past off-season. Early impressions aren't necessarily indicative of anything changing in Adams' batting profile, but so far he's had a number of successes going to opposite field. Since there is no available data from Spring Training, and last night's game has not been updated in the trackers, I made a custom spray-chart to show you my possibly romanticized impressions of how Adams has been hitting so far this year. I won't say that I can vouch for complete or even partial accuracy, but I'm not willing to say I can't either. 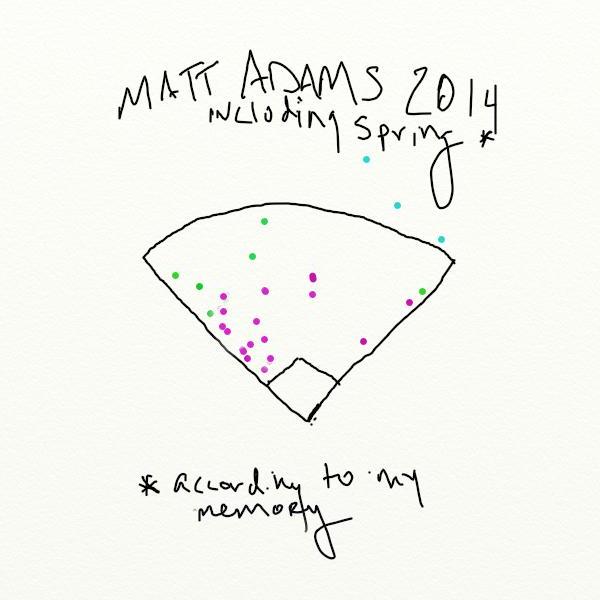 I doubt we'll see the Pirates play him straight, so it'll be interesting to watch Adams try to, uh, buck that shift.

Who the hell is that?

That's Travis Ishikawa. You might remember him from such roles as "Aubrey Huff's backup" and "Corey Hart's backup" and "guy standing in the rain receiving news that he has been DFA'd to make room for Derek Jeter's return from the dl." He's a light-hitting lefty 1B who has been getting platooned with Gaby Sanchez, who once had an ok year with the Marlins. And that is the depressing state of first base in Pittsburgh right now.

Keys to the series

-Don't hide the truth from Andrew McCutchen. He knows what's in your heart.

-Perhaps the purpose of leaves is to conceal the verticality of trees.