Share All sharing options for: Cards vs Brewers Recap 4/28: Wacha pitches well and is backed by homers: Cards lose to Brewers anyway

In a game that was decided in twelve innings, the Cardinals lost to the Brewers 5-3.

Matt Holliday and Allen Craig each hit a home run, and Michael Wacha pitched a great game but made the mistake of being imperfect when it mattered most: namely, when Pat Neshek and Seth Maness were pitching. The Brewers tied the game in the seventh inning when Neshek beaned in a run, and scored the game-winning runs in the twelfth inning off Maness.

Jhonny Peralta came to bat in the bottom of the twelfth representing the winning run but grounded out to end the game instead. St. Louis will never now win that game.

As Aaron Finkel (né a fink) mentioned in his series preview--and as Jeff Sullivan covered at more length on Fangraphs--Wacha's last start was unusual: against the Mets on Wednesday he threw only two changeups total. It was unclear at the time just why he and Yadi would do such a thing, though it was reasonably assumed that the incredibly windy conditions at CitiField were probably to blame.

Here is a sentence reminding you that Michael Wacha possesses one truly plus-plus pitch, and that pitch is his changeup. The question coming into tonight's game, then, was if he would return to using his changeup as the great whiff-inducer that it has heretofore been, or if he would continue to rely more heavily on his other pitches.

Turns out it was the wind, folks. Wacha and Yadi returned to employing Wacha's changeup as a potent tactical weapon: i.e., as a strikeout pitch. Because here is how Wacha gets a lot of strikeouts: 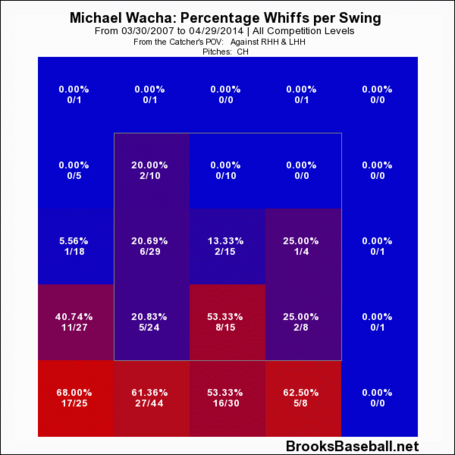 So that right there is evidence of both his changeup's potency and Wacha's great command of it. He throws it seemingly into a righty's or a lefty's wheelhouse--that is, down the middle of the plate--but the ball ends up down or down and in. His changeup is good and I'm happy he's throwing it again.

However, if you haven't updated your personal Wachapedia, know that he is now a much more versatile pitcher than he ever was last year, and he showed off this versatility to great effect last night. While his increasingly competent curveball has produced more discussion on VEB, Wacha's cutter is another important addition. He's already thrown it several times more often than he did through all of last season, and against the Brewers he induced two strikeouts with the cutter, to go along with three strikeouts on fastballs and four on his impossible changeup.

He pitched a very good game Monday night--6 1/3 IP, 8 H, 3 ER, 9 K, 2 BB. He also theoretically hit two batters in the sixth inning, but since neither Brewer scored I'll skip the close reading of the videos and just say that Wacha struck out Khris Davis to end the inning. Which led to the bottom of the sixth and--

After Wacha escaped the sixth inning with a 1-0 lead, Matt Holliday and Allen Craig each hit solo home runs to increase the Cardinals' lead to 3-0.

Remember earlier this season when Matt Holliday missed a home run at Great American Ball Park because it hit the tippy-top of the outfield wall and bounced back for a single? He almost lost another one last night, this time because of Carlos Gomez's glove. Here's how close it was: 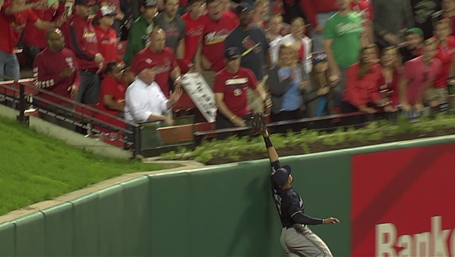 Very close. And here is Craig's home run, which he pulled to left-centerfield: 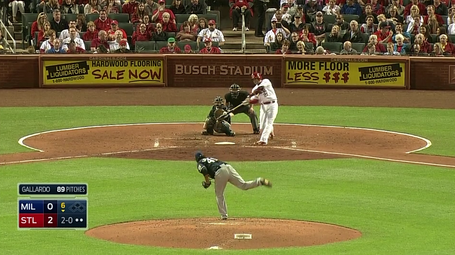 Even if it's just one swing, it's encouraging to see Craig's front leg planted so strongly in that way that makes it seem like he's about to hyperextend his knee.

A good inning, the sixth. Alas!

Here is the sequence of events, with Wacha starting the inning at 83 pitches:

- Mark Reynolds struck out swinging. One out.--The water, it is wet.
- Jeff Bianchi walked. Wacha at 92 pitches.
- Elian Herrera singled to center. Jeff Bianchi advances to second.--This is where I would have replaced Wacha with Carlos Martinez. I said this to my girlfriend (a Brewers fan who made me promise to mention Hank the dog) at the time, so it's not mere second-guessing.
- Lyle Overbay pinch hits for Yovani Gallardo, singles to center, scoring Jeff Bianchi. Herrera advances to second. Wacha at 97 pitches.
- Carlos Gomez bunt single to third. Bases loaded. Wacha at 99 pitches.--This was Wacha's fourth PA against Gomez.
- Scooter Gennett singles to right scoring Herrera.--Down with all (Wisconsinin) Scooters!
- Pat Neshek replaces Wacha and strikes out Jonathan Lucroy.
- Aramis Ramirez is hit by pitch, scoring Lyle Overbay and tying the game at 3-3.--Let us not allow the passive voice to hide Pat Neshek's culpability here: Pat threw a slider that slid not unlike a poorly thrown fastball right into Ramirez's back.
- Khris Davis flies out to left to end the inning.

I don't think it's a stretch to say that many of us wanted Matheny to replace Wacha at some point before he did. It's also probable that most people would've wanted Martinez or Siegrist to enter before Neshek, even though it wasn't the eighth inning. It's also curious that Carlos Martinez pitched just the one very brief inning, when Matheny replaced him with Trevor Rosenthal for no good reason except that it was the ninth inning.

On that last issue in particular, what's worrisome is not so much the divvying up of outs between Rosenthal and Martinez--they're both fantastic and should get as many innings as their arms and the vagaries of the season allow--rather, what's worrisome is the choice of a clearly inferior pitcher in the most important situation of  the game. Maybe Matheny would say that statement's reductive, but I just can't think of any good reason to complicate it.

In the bottom of the tenth, after Matt Holliday led off with a double, Matheny had Peter Bourjos pinch hit for Rosie, asking him to bunt. Not a bad idea in this situation--one run wins the game--but also not one without risks: (1) Bunting is hard at all times, but especially so when the other team knows a bunt is coming. (2) Matt Holliday is not a fast or nimble baserunner, and again, the margin for error in a situation where the defense knows exactly what you're going to do is very slim. (3) Baseball.

Bourjos bunted toward third base, but too hard, and Holliday was easily caught in a rundown. It was not a great bunt, which the announcers were quick to point out, but look at this-- 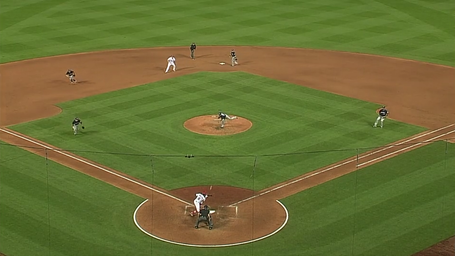 --right before Bourjos lays down his bunt, the Milwaukee third baseman is charging straight in, the shortstop is almost two-thirds of the way to third already, and Holliday? Holliday's momentum is heading back toward second and I assume he's running on contact. Practically the only bunt that would work in this situation is one of those liners toward the second-base gap. I have nothing but sympathy for Bourjos here.

In his first appearance in the Show, Garcia employed the strategy of not swinging at bad pitches, and as a result he was walked by Milwaukee relief pitcher Tyler Thornburg. Grichuk entered as a defensive replacement in the top of the ninth. He then came up to bat in the bottom of the ninth with the winning run on second, no big deal, and after a nice PA ended up popping out to shallow left field. In the top of the twelfth inning, Grichuk was switched over to center in a series of moves by Matheny that I'll just set down here for you to judge:

Seth Maness started the inning and made sure it was the final one, giving up two runs and taking the loss.

Don't look at this WPA chart:

The second game of the series takes place tomorrow at 7:15 central, Lance Lynn going up against Kyle Lohse.