Today's game was the 2410th regular season bout between the St. Louis Cardinals and the Pittsburgh Pirates. By winning today's game, the Cardinals close the gap on the lifetime series, which now stands at 1162-1224.

The last time these two clubs met on April 27 was just a year ago.  AJ Burnett and the Pirates edged Joe Kelly and the Cardinals 5-3.  Russell Martin doubled and homered.  Yadier Molina, Allen Craig, Jon Jay, and Carlos Beltran all collected doubles for the Cardinals.

In a fink's series preview, one of the things he noted in relation to this game was Volquez' encouraging (for Pirates fans) walk rate.  Walks weren't a problem for him today, but he gave up some solid contact.  Even so, he looks better in general to me than he did during his by-gone days with the Reds.

He also profiled their new first baseman Ike Davis, whose only contribution to this game was not quite keeping his foot on the bag.

Daniel Descalso got another start at second, and Jon Jay continues to rack up starts in center.  Kolten Wong continued his slide down the depth chart, I guess.  Is he the third string second baseman now?

Adam Wainwright was fantastic.  In the first, he walked Jose Tabata, but was quick to get outs from the others, including two fly outs to Matt Holliday, who continues to look more range-y to me than I expect.  He at least seems to be covering more ground than I think he should be able to.

Back-to-back singles off the bats of Tony Sanchez and Volquez started the third.  Wainwright blew through the top of the lineup, though, to get out of it, including a classic Wainwright curve to Andrew McCutchen to end the inning.

In the sixth, Tabata leaned across the plate to "take one for the team" on a slow curveball.  Waino and Matheny argued that he shouldn't have been awarded a base.  The umps talked about it, and they allowed him to stay.  Luckily, no harm was done.  Waino struck out McCutchen and Neil Walker in dominant fashion.

Carlos Martinez was nasty in the ninth.  He struck out the side with relative ease.

Wainwright threw a couple of 69 mph curveballs today.  That was kinda crazy.  This month (before this game), Wainwright's curve has averaged 75.47 m.p.h, which is pretty consistent with his career norms. 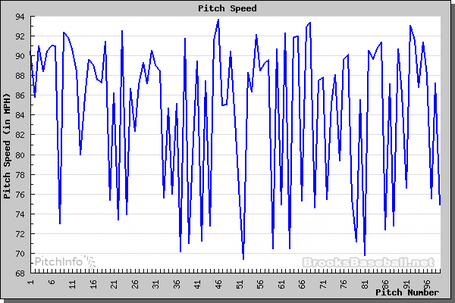 Look at those dipping under 70!  That was kindof fun.  Those are about 5-6 m.p.h. slower than his career averages.  I don't recall him throwing that slowly before.

Edinson Volquez started off by allowing a Matt Carpenter double into the right field corner.  It was followed promptly by a sacrifice bunt by Jon Jay.  It felt a lot like watching a game from this time two years ago, which is frustrating. Holliday drove Carpenter in with a sac fly.  I guess it was encouraging that they could manufacture a run.  I hope they start scoring runs enough that Matheny doesn't feel like he needs to do that in the first inning.

The Cards threatened in the second but weren't able to push across any runs.  Yadier Molina doubled into the right field corner.  It was pretty aggressive baserunning on his part to stretch  it into a double.  He followed that by aggressively advancing to third on a lineout off of Allen Craig's bat.  Descalso dribbled a grounder to Volquez, and Molina got caught in a rundown.  He did his job and allowed the runners behind him to advance to second and third. (This was all after a weird squeeze attempt gone wrong.)  A Wainwright groundout ended the inning.

Volquez became more efficient through the next few innings.  He retired the side in order in the third and fourth.

Jhonny Peralta hit the first home run in Cardinals history to lead off the Cardinals' half of the fifth.  Really, the home run drought was at 10 games, not the entire history of the organization, but that's almost the same thing.  Peralta's fifth inning homer tied Edgar Renteria for the April record number of HRs for Cardinals' shortstops (5).  He didn't stay satisfied with that for long.  More on that later.

In the sixth, Holliday and Matt Adams singled.  Molina grounded to the shortstop, a sure inning-ending double play.  Except it wasn't.  The Bucs defense was able to retire Adams at second, but the throw from Walker pulled Ike Davis off the bag at first.  Molina was deemed safe.  The Pirates disagreed and challenged.  The call was upheld, extending the inning.  Allen Craig took advantage by flaring a single into right, scoring Holliday.

Peralta took further advantage.  He knocked his second dinger of the game into the Pirates' bullpen to put a serious number up on the board.  That chased Mr. Volquez from the game.

Adams tripled(!!) off of Jeanmar Gomez in the eighth and came home to score on a Molina sac fly.

Tune in tomorrow as the Milwaukee Brewers come to town.  They'll send Yovani Gallardo to the bump.  He'll be opposed by Michael Wacha.  The game will start at 7:15 CT.

Also, be sure to get your 50 cent drinks at On-The-Run at Mobil tomorrow.