What has MLB really gained with instant replay?

Anything? Something? As with all instant replay across all sports, the heart is in the right place, but the unintended consequences of the system have done umpires, players, and fans a tremendous disservice.

Share All sharing options for: What has MLB really gained with instant replay?

Baseball is a game of human error as much as it is anything else. No other sport, except maybe golf, frames human fallibility so well as to mirror life itself. There are a multitude of lessons that can be learned on the baseball field that transcend the sport. That most of life's successes only occur after many, many failures. That the process of seeking perfection can be a fruitless endeavor, something even great men can accomplish only 23 times in 300,000 odd games -- and even then it's only good until your next start. And, finally, that few rules exist in a vacuum that includes only binary answers rather than a multitude of angles and gray areas that sometimes need to be coddled and massaged so as to smooth out a game with a great many judgments made by a great many close-to-perfect, but alas still human individuals.

We've seen an example of it this week with the hubbub surrounding Michael Pineda and his use of pine tar to get a better grip on the baseball. Most around the game know that usage of elements such as pine tar or bug spray is utilized by many pitchers in cold, dry conditions when a leather ball is hard to grip. C.J. Wilson went on Colin Cowherd's radio show and basically made the "Yeah, we all do it, but don't be so damn BLATANT about it." case against Pineda, while begging the MLB to modify a rule that doesn't seem to be followed much at all around baseball. The written rule states that no foreign substance may be applied to the baseball; the unwritten rule is "Don't rat me out and I won't rat you out." -- essentially the same way in which organized crime has policed itself for generations.

I go back to Game 1 of the 2006 World Series when Kenny Rogers was caught with some sort of foreign substance on the base of his left hand in the first inning: 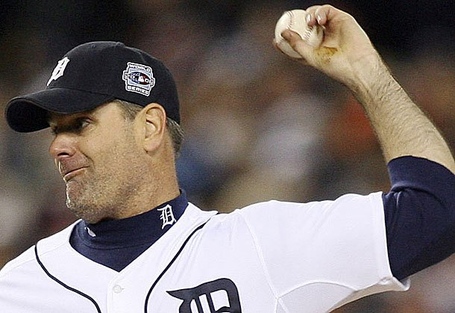 "It's not important to talk about," La Russa said afterward.

Tony La Russa, meet Tony Soprano. Sometimes it's best not to open Pandora's Box because once open there's no putting the bunny back in it.

That brings us to instant replay. The intent of this system was to reduce bad calls by utilizing the latest and greatest video technology so that each and every game can be played with less debate about the adjudication of the proceedings.

Is that what we've gotten? Hell no, not by a long shot.

For one, the new replay rules haven't absolved the adjudication mess, they've simply shifted it from the field to a video booth in some bunker of television screens in New York. They've removed the face behind the mask and replaced it with no face at all. Lord Vader could be reversing or confirming these calls for all we know, and managers can't even kick dirt on the bastard when they disagree. Removing the responsibility from the site of the game also removes the responsibility for the decision, leaving managers just as exasperated, if not more so, than they were for the last 120+ years.

For another: We now have to define plays that we just made an assumption about before.

We all thought we knew what a catch was in football until we had instant replay. Then we had to redefine a "catch" as a series of different actions and different stages of control of the ball. Any disputed catch now becomes some sort of legal argument as to what happened when and where was the ball on the night of April 16th?  WHERE WAS IT?  "Were you, the ball, in the hands of the receiver or merely clutched to his chest? DID YOU IN FACT MOVE SLIGHTLY BEFORE THE MAN IN THE HELMET WAS ON THE GROUND AND LEGALLY DOWN?".  Monday morning QB's have now turned into Sam Spade during a backroom interrogation.

Welcome to baseball in the age of instant replay. About the only catch/no catch situations I've seen disputed in baseball prior to this April were the ubiquitous "trap" play, usually with outfielders coming in on a soft line drive. Occasionally there was an issue of transfer from catching to throwing, but nearly all of those were ruled a catch first. Now? The league has had to modify the ruling publicly to define was an actual catch is, as if the last century of baseball hasn't done a good enough job of that. We can now see the play in ultra slow motion, which allows us to make judgments on things we used to take for granted.

Like quantum physics, all the rules of the world at full speed begin to break down when you're able to see it at a level not compatible with how they were written to be observed. Basketball now allows officials to go look at a replay to determine if a foul was flagrant. Does that mean that slow motion replay has a way of reading the mind of the individual to determine intent at regular speed? No, it doesn't, nor should it, and attempting to do so really violates the spirit of the game itself. Sports are meant to be played at full speed and refereed at full speed. The player doesn't get the benefit of reviewing his free throw in slow motion to adjust whether it went in or not, so why should an official get that courtesy?

The real gist of any replay system was to get more calls right. But what's "right"? What is the "correct" call? Why do we care so much about the perfection of rules enforcement in a game dominated by imperfection everywhere else? Plays that were previously just "part of the game", like the neighborhood play at second base or the bang-bang play at first base, are now reviewed in a microscopic fashion at certain points of the game or if challenged by a manager. There are few that provide any "indisputable evidence" of the call one way or the other, so umpires, instead of being fair to one team and unfair to the other, now stand a chance to be unfair to both parties on the same play.

There's no instant replay system out there that's ever ended all debates about the enforcement of rules -- it's only ever created more points of contention to debate about. For every call that we get correct that was missed before, we have two or three that were rarely questioned in the past but are now open for debate.

This is better than what we had before?  Really?

Used to be a call was missed, we bitched about it, kicked a little dirt, we moved on. "That's baseball." we used to say.  "It will even out in the long run" was the credo, which only didn't seem justified on plays in which there's no "long run" -- like the Denkinger play in '86.

But just like Buckner's wickets, it's not the Denkinger play that cost a team the World Series, it's what happened before and after the play that ultimately decided things. The play of the players, not the judgments of the people entrusted to enforce the rules.

Somewhere along the line, we've lost that sensibility because we've made the decision that we have the technology to do the job better.

In the interest of getting every call right, we've lost sight of the beauty that is the human condition so exemplified by our national pastime.