Tonight was a rematch going aaaaaall the way back to April 4; Shelby Miller facing the Pirates' Gerrit Cole. That tilt ended in a 12 - 2 drubbing by the Pirates, Miller responsible for 5 of the opposing tallies.

In his previous start, against Washington on Sunday, Shelby went 5 1/3 IP with 7 K's, 5 walks, 4 hits and 0 runs (62 game score). In that game, he seemed sharp at the outset, but was fighting his command by the third.

Coming into tonight, Shelby was 0 - 5 against the Pirates while not losing more than once against any other team.

With this series, the Pirates are finishing up a stretch of 26 straight games against NL Central teams. They're now 9 - 15 so far during that stretch. They're 2-8 in their last 10 and have lost 4 in a row.

Earlier today the Pirates put their closer, Jason Grilli on the 15-day disabled list with an oblique injury. They brought up RHP Jared Hughes from AAA Indianapolis to step into the breach. Or so it seemed as the game began. Later we would learn:

Per MLB rules, #Pirates cannot recall Jared Hughes for Grilli. So, Grilli is not available to pitch tonight, but he is NOT YET on the DL.

Meanwhile, Russell Martin was back after missing two games against the Reds with "lower-body soreness" per Clint Hurdle. He left the game in 7th with hamstring tightness.

The Cardinals ran out what should more-or-less be their standard lineup against a righty.

In the first, Miller grounded-out the side 1-2-3, but showed early signs of command trouble.

In the Cardinals half, Matt Carpenter quickly got things going, laying down a nice bunt for a basehit on Cole's first pitch of the game. Matt Holliday would increase his MMI total on the season with a double down the RF line to drive Carpenter safely home.

That was it. Three batters into the bottom of the first, all of the run scoring would be over and the game was decided. Everyone go home.

It's never that easy, of course. Miller would work into and out of jams, giving up 4 walks and 3 hits in 5 2/3 innings. Inning ending double plays in the 2nd and 3rd would save his bacon. 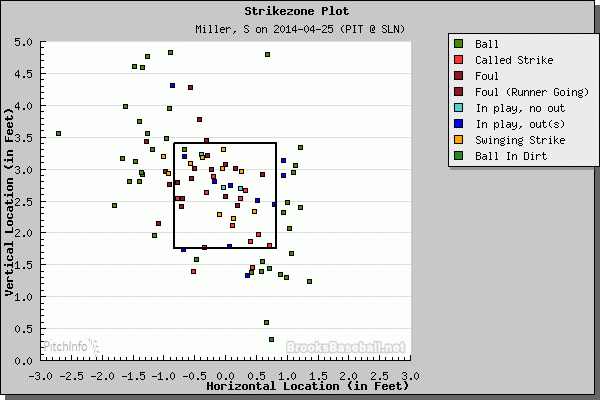 On the Cardinals offense side of the ledger, at least we got to see some baserunners this game. Cole scattered 6 hits and 3 walks over 8 innings, but the Cardinals were never able to capitalize after getting that initial run home.

In the 3rd, there was a challenge when Jon Jay tried to take an extra base on a Holliday single. He was called safe at third, but the call was overturned after a replay challenge.

Things would get interesting* in the top of the 8th, as Carlos Martinez loaded the bases with one out. In response he appeared to dial it up to 11, blowing away Pedro Alvarez and Chris Stewart on consecutive K's with triple-digit heat.

(* interesting here can also be interpreted as, by far, the highest leverage plate appearances in the game)

Trevor Rosenthal struck out the side in the 9th, including getting the final strike of the final out with a pretty curveball that Gaby Sanchez probably still doesn't believe happened. 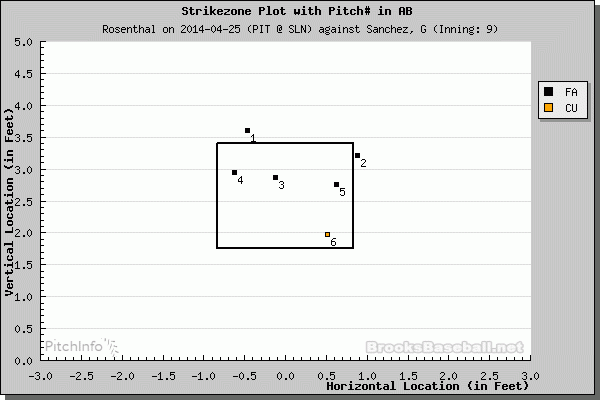 that one was nice

We also learned about Mom and Dad jeans, the futility of the hitting coach, and why sports can break your heart.

And speaking of tomorrow, it's VEB DAY! So, come on out and meet up with us!