The Cardinals (12-11) return home to face the scuffling Pirates (9-14) for a weekend series in St Louis.

The Pirates have really struggled since taking 2 of 3 from the Birds April 4-6. They won 2 in a 3 game set against the Cubs, but then went a combined 3-11 against the Reds and Brewers. It's awfully early to panic, but this happened yesterday:

The Cardinals are coming off a disappointing series loss at Citi Field, but overall the 5-6 roadtrip isn't anything fans of the team ought to fret over. It would be nice to see the offense perk up, but the lineup is much like 2013's: Without a lot of power, when the hits don't fall in the proper order it can be a frustrating team to watch. 23 games into a season is long enough that overall batting lines can become concerning to fans, but if you're concerned by Jhonny Peralta having the 8th worst batting average in the league, recognize that career .266 slap-hitter Emilio Bonifacio has the 8th best. We're still looking at small sample sizes. As Ben's article yesterday showed, the Cardinals are doing a lot of things right at the plate, regardless of outcomes.

Some things to consider

On the other hand, there are some numbers that can occur for an individual in a 23 game sample that are worth getting a bit worked up over. Here are 3 of them, all on the Pittsburgh side: 4, 4.6, 92.30

4 is the number of starts Wandy Rodriguez made this year before hitting the DL. He suffered some knee-inflammation and is expected back shortly after the 15 day DL minimum, but he's needed to be a key contributor. For some context, Wandy is 35-years-old and missed 4 months last year with arm pain. Stud pitching prospect Jameson Taillon just had Tommy John surgery, Jeff Locke was hurt this spring and is getting lit up in AAA, and yesterday the Pirates sent someone named Brandon Cumpton to pitch in Wandy's stead. Pittsburgh needs good pitching to contend this season. They potentially have it, but sorely lack depth. Wandy Rodriguez' early trip to his couch is genuinely concerning.

4.6(%) is a number for Pirates fans to be enthused over. It's, somehow, Edinson Volquez' walk-rate. Their free agent starter signed to replace the distinguished AJ Burnett has always had terrific stuff, but he's always had terrible control, as his 11.7% career BB number demonstrates. Now, it's just been 4 starts, and his normally impressive strike-out rate is way off his career norms as well, but if the Pirates can transform Volquez with anywhere near the success they had in Francisco Liriano's revival last last season, it could significantly affect on the NL Central race this year and in the future. His command Sunday is something to keep an eye on.

92.30 might be nothing, probably is nothing, but it would terrify me if I was a Pirates fan. That's Francisco Liriano's average fastball velocity this April, and it's well-off last year's 93.84 standard. His slider is coming in at 84.91 mph over 4 April starts. Last season's lowest average velocity on that pitch for a month was 87.20. It's also showing less vertical bite than at any time last season.

He's worked at lower velocities in the past, but here's his monthly chart from BrooksBaseball: 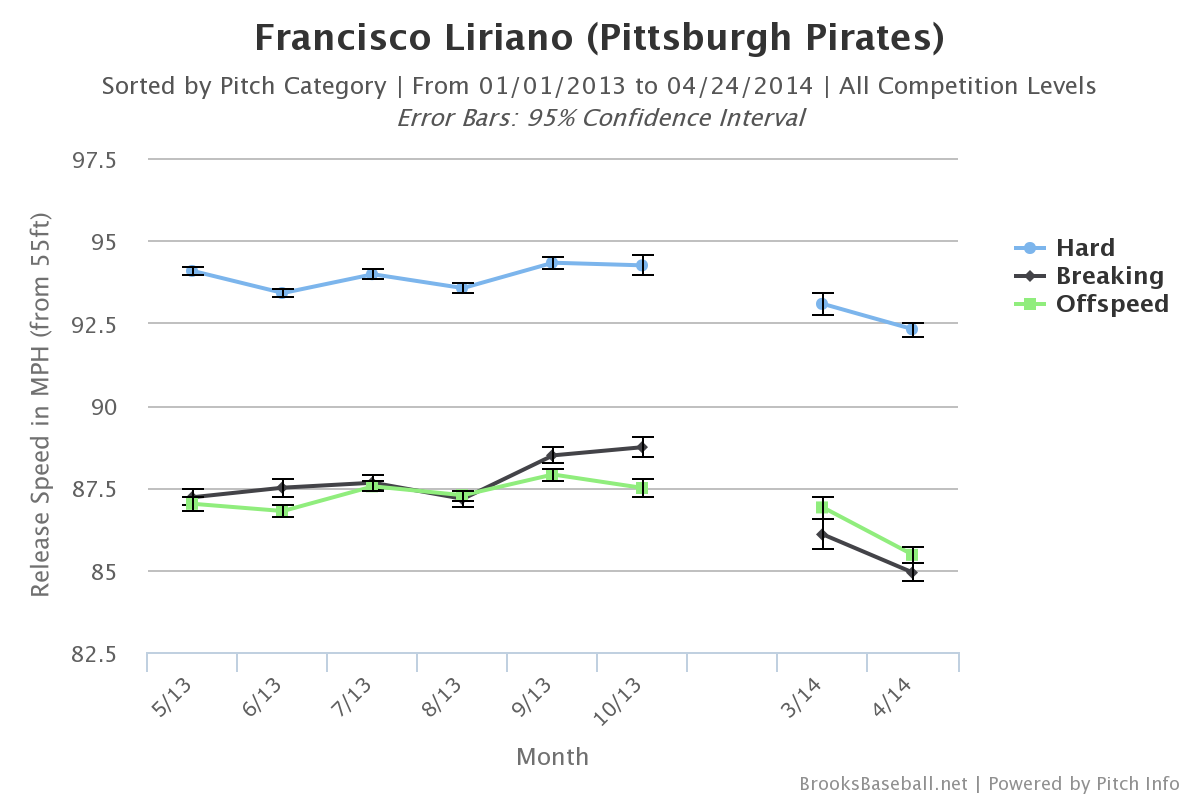 (he missed April last year with a non-throwing arm injury)

It has been a cold, wet April, and it's just a handful of starts, and not all radar guns are calibrated identically, etc., etc., but if Liriano is hurting or loses his effectiveness, it would be a disaster. I'll be watching the gun closely on Saturday.

Who the hell is that?

That's former Met first-baseman Ike Davis. The Pirates recently traded a relief pitcher prospect and a PTBNL for Davis and sent former "Who the hell is that?" protagonist Travis Ishikawa packing. We wish Travis well in his future endeavors. So. Ike Davis.

The good: He hit 32 home-runs in 2012, his age-25 season. He can take a walk. Just 2 years ago, prospect guru John Sickels included Davis in his favorite under-25 list and wrote "Expect further continuation of his career numbers, which are currently .271/.357/.460. Should be a solid regular for years."

The bad: He hit .227 that year he had 32 dingers. He strikes out a lot, 101 times in 377 PA last year. He hits far too many groundballs for someone whose best attribute his power. He's terrible against the curve. He's been injured a lot.

Considering Davis is replacing Travis Ishikawa and is set to platoon with Gaby Sanchez, this seems like a low-risk move with some upside if the Pirates batting coaches can have any success.

Keys to the Series