The legend of the Mighty Run Support finally dies.

A battle today among fascists

Which hitters would end up the brashest?

Each wanted the win

But at this, the Mets proved the aptest

I didn't much care for today's lineup.  Matheny stacked it with lefties, ostensibly with the idea that they have better success against Colon: RHB have hit .258/.300/.394 against Colon in his career, and LHB have hit .266/.321/.457.  The difference in slugging is notable, to be sure, but when stacking your lineup with lefties means starting Daniel Descalso at shortstop, you can't expect the handedness of the hitters to make much difference.  Descalso is not good at baseball in even the most favorable situations to him.

Naturally, Descalso went 0-4 with two strikeouts.  Peralta could have done that.  So could every other ACTUAL SHORTSTOP in AAA, but with much better defense.  I mean no offense to Descalso, and I certainly appreciate Game 5 of the 2012 NLDS, but I will never understand why he is the chosen backup shortstop.  Or why he ever, ever, ever, ever, ever gets a start there.

It was super windy at the ballpark again today, and I wish I could blame the loss on that, but the Mets seemed unfazed.  Lance Lynn pitched pretty darn well through the first five innings.  His fastball hit 94 a time or two, and he generally looked sharp.  He also battled adversity well, at least for awhile.  After allowing a hit to Tejada in the 3rd, he came back to strike out Chris Young for his sixth strikeout of the day.  Young went deep on a poorly-located fastball in the 5th inning, and Abreu followed with a double, but Lynn came back to strike out Anthony Recker (on a nasty slider) and Tejada to end the inning.  Honestly, I felt pretty good after that.  I felt like we were going to win.  I've learned my lesson.

Lynn's final line: 4 H, 3 R (two earned), 2 BB, and 9 Ks. He pitched well today, and has pitched well the last three games.  He still needs to get his walks down a bit (2.66/9 on the season), but I'm not concerned about him on the whole.  He pitched out of some jams today and didn't sweat too awful much while doing it.

The real WTF moment of this game came in the 7th inning when Matheny inexplicably double-switched Wong for Ellis when Siegrist came in for Lynn. Wong had two of the team's total four hits.  A defensive replacement, presumably?  So we were all really surprised when Ellis blew a play on a line drive off Granderson about 30 seconds later. I supported signing Ellis to some degree, because he’s exactly the kind of bench player/backup infielder that fits with this team. But that he is continuing to get playing time ahead of Kolten Wong is frustrating at best.

I tend to try not to put too much on the manager in a loss, and honestly, I don't think this move lost the game for us.  Still, it was tacky and I hated it.

Also, Siegrist gave up three hits in a row and doomed us.

The Cards had a chance to come back in the 8th, with two on for Matt Adams.  He grounded out weakly to the pitcher.  And that about sums up this entire series.  I can't wait to get home. 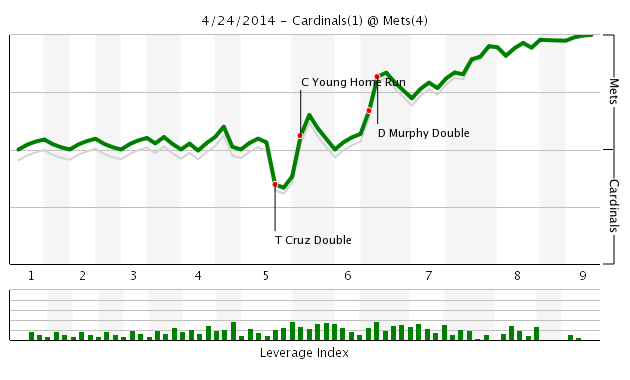 2. The Cards' offensive struggles notwithstanding, Bartolo Colon really pitched a gem today, allowing only four hits,  striking out eight, and walking no one.  He made quality pitches when he needed to and seemed to have good movement on them.  If I had a better understanding of how to read/interpret the pitch f/x graphs that show this sort of thing, I would post them here.  Feel free to elaborate on this in the comments.

3. Today's game thread included a rousing debate about the efficacy of playing "the hot hand." It's actually pretty informative, if you're new to the SABR side of life, and worth a read if there happens to be anyone out there who hasn't already read one of these discussions on VEB, or who has read one, but also has insomnia.

The Cardinals return home tomorrow for six games against the Pirates and Brewers.  I predict a nice homestand to quell some of the hand-wringing going on around here - myself included.