Jon Jay is making the most of his early opportunities

Jay has a swing "we've got to capitalize on," Mike Matheny.

Share All sharing options for: Jon Jay is making the most of his early opportunities

When the Cardinals traded David Freese (and Fernando Salas) for Peter Bourjos (and Randal Grichuk) in the offseason, most people believed the move signified the beginning of the end for Jon Jay's tenure as the team's starting center fielder. Though Jay saw a decline in most offensive categories in 2013, his .276/.351/.370 slash line and 1.9 fWAR were still more than respectable among MLB center fielders. His standard hitting statistics (batting average, on-base percentage) were in the top ten, and his advanced hitting statistics (wOBA, wRC+) were in the top 15. The problem for him, especially with the "what have you done for me lately?" part of the fan base, was his significant drop-off in defensive metrics (-7.3 UZR) combined with a disappointing showing (offensively and defensively) in the playoffs.

Toward the end of Spring Training, Ben talked about the competitions that weren't and just two days ago, Craig did his best to put reasoning behind which center fielder was receiving starts and when (i.e. based on which pitchers were on the mound). Well, Jay has started in center the last two games since Craig's post, so the season center field starts are now Jay: 9, Bourjos: 12. Also, Jay has finally crept ahead of Bourjos in terms of plate appearances, 49 to 46. Well, there appears to be a reason behind Jay's increase in playing time according to a quote from Mike Matheny in this article from Derrick Goold yesterday:

"Jon Jay has been taking some good at-bats. Peter Bourjos is going to get good opportunities against a lefthander tomorrow. But right now Jon is taking the kind of at-bats we've got to capitalize on. We've got to get something going."

As you can see, Jay has been better than Bourjos in all eight of the hitting statistics included in the chart. However, Bourjos has a 0.1 fWAR to Jay's 0.0, largely due to Peter's ability in the field. Jay's fielding deficiency was well-documented last season, but given his 1.9 fWAR, it is apparent his bat did a good job making up for it. In my opinion, I believe this could be the case or even better again this season, especially with a bounce-back performance at the plate. 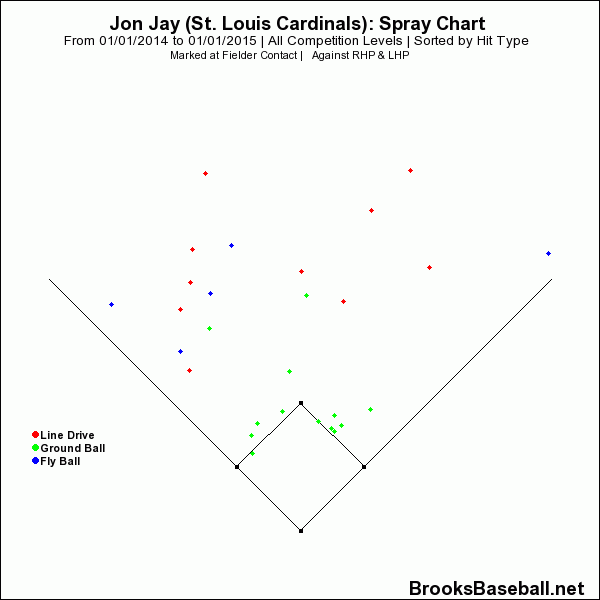 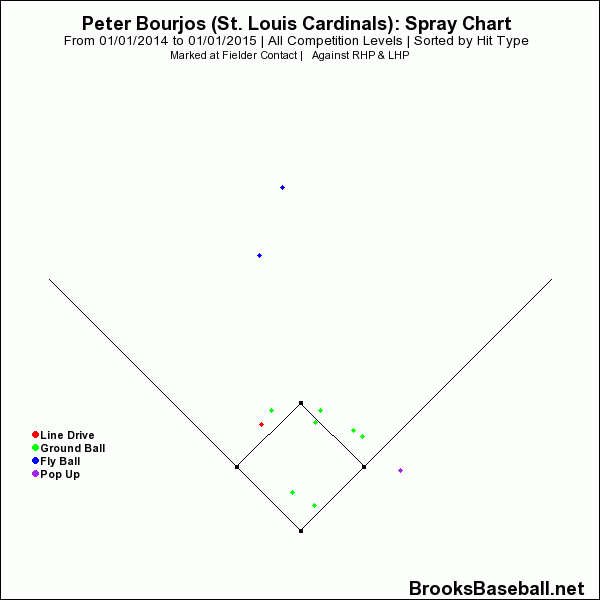 Thus, not only are Jay's hitting statistics better than Bourjos', but his batted ball outcomes are better as well. According to the provided spray charts from BrooksBaseball, Bourjos doesn't have a single line-drive to the outfield this season, while Jay has 10. Jay's 33.3% line drive percentage is 11th in the majors (of players receiving at least 40 PAs), while Bourjos is ~13% lower at 20.0%.

We have been using WPA in the majority of our game recaps this season, and I've become pretty intrigued by the statistic. Though it cannot be considered predictive by any means, it still does a pretty good job at describing each player's value in a given game. A hit and an RBI with your team up by five runs is going to provide a lot less value than a hit and an RBI with your team down by one run, and WPA takes this into account. Well, here is a line graph of Bourjos' and Jay's WPAs from each game this season. Again, no predictions should be made from this, but rather I just provided it for descriptive, "for what it's worth" purposes.

Bourjos is a far superior defender than to Jay. I will never disagree with that, but at the same time, 2,005 plate appearances into his MLB career, Jay has been proven to be a better hitter than Bourjos. Considering the Cardinals are 23rd in runs scored (77), 16th in batting average (.245), 19th in on-base percentage (.313), and 28th in slugging percentage (.353), it is understandable that Matheny is starting the better hitter more often at this time. Plus, we are all pretty aware of Jay's "streakiness" at the plate, so why not use him while he is "taking some good at-bats"? At the end of the season, Bourjos could very easily take over the starting job full time, and I would assume that's why Mozeliak made the trade with the Angels in the first place. But the fact is, Bourjos hasn't proven worthy of it just yet, and Jay is making the most of it.

Credit to BrooksBaseball, Fangraphs, and Derrick Goold of the Post Dispatch for vital information used in this post.