Cardinals at Mets Recap 4/21: Cards lose to Mets 2-0 despite good start by Lyons

The main thing to remember is that baseball was played and no one got hurt.

Share All sharing options for: Cardinals at Mets Recap 4/21: Cards lose to Mets 2-0 despite good start by Lyons

Tyler Lyons pitched a solid six innings in lieu of Joe Kelly, but Jenrry Mejia pitched his own very good 6 2/3 innings, and the Cardinals' offense went down without much of a fight. The Cards lost 2-0.

Not one truly exciting moment happened, except perhaps for a fine double play turned by the Mets, and the most powerful reaction this game is likely to elicit is, "This happened."

Before the season started, VEB conducted a Writers Roundtable on the subject of the Cards' hypothetical fifth starter, and in that Roundtable fourstick championed Tyler Lyons:

With a solid fastball, two average/plus breaking pitches, a good changeup, and fantastic command of all four pitches, Lyons is the prototypical Cardinal Way pitcher: Throws strikes, stays ahead in the count, and works quickly.

That description has been true of Lyons in his starts at Memphis this season (3.41 FIP), and it was mostly true tonight. Lyons's big, sweeping slider was especially hard for lefties and righties to square up: Of 15 sliders, Mets hitters whiffed through four of them and put none in play. His two-seam and four-seam fastballs were located well for the most part; the two run-scoring hits Lyons allowed were on a fastball down and in that David Wright muscled into left, and a slow curve that Travis d'Arnaud lined to center. 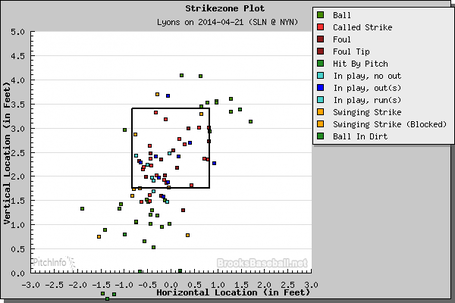 Recall or notice that this graph is from the catcher's point-of-view, and imagine an 82-mph slider starting way out and above Lyons's head and sweeping fast and sharp down toward a right-handed batter's feet. And because he repeats his release point so well, the slider is hard to differentiate from the fastball, so that a ball that starts up and away might arrive up and away in the form of a four-seamer, or it might finish its life down and in as a slider.

The Mets starter's final line was pretty similar to that of Tyler Lyons: 6 2/3 IP, 4 H, 0 ER, 3 BB, 6 K, with six groundouts to four flyouts. Yet while I'd characterize Lyons's start versus New York as very satisfactory, I'd say that Mejia's start against St. Louis was most impressive.

In Aaron's series preview, Steve Schreiber of Amazin' Avenue had this to say about Mejia:

Jenrry Mejia has incredible stuff, top of the rotation stuff in his own right...His cutter is nasty and he came back last year featuring a brand new slider, which has been a huge weapon for him. He's had some issues with walks early on but most of those came in his first start, where he had to deal with rainy conditions. On talent alone, Mejia is right up there with Zack Wheeler. He just needs to find a way to stay on the mound and get reps. He's also got some awesome Pedro Martinez hair.

So how did Mejia do? First of all, I'll just come right out and say that I don't think his hair is that awesome--the bar for "Pedro Martinez hair" is just too high. Pitching-wise, though, he did well. You see his numbers a few lines above. My impression of his "stuff" is that he has it, and that it is often legitimately "nasty." He located his primary pitch well, throwing 58 cutters, 37 of them for strikes, and his breaking ball often looked really devastating. Whether he can continue to marshal his raw pitching skills into effective out-getting skills, well that's a question VEB has become very familiar with the past two seasons.

At any rate, the way Lyons accomplished his successful start and the way Mejia accomplished his--they feel very different, and not just because of their opposite handedness. You can read it in how fourstick described Lyons's skills versus how Schreiber described Mejia's, and you can see the difference in some of their stats: Lyons has a career 8.8% SwStr% and Mejia a 12.0%, for example. This game, even if it was boring, served as a good reminder of the many paths to pitching success.

After six innings of excellent pitching by Mejia, in the seventh we got a glimpse of the "issues with walks" hinted at in the series preview, as Mejia walked his final two batters of the evening, Jon Jay and Mark Ellis.

With two outs, Matheny elected to pinch-hit Daniel Descalso, which is an incontrovertibly poor decision unless (1) Kolten Wong is unavailable, or (2) Matheny knew that Terry Collins would respond by replacing Mejia with a left-handed reliever, which would allow Matheny to bring RHB Shane Robinson into the game to pinch-hit for the pinch-hitter Descalso, with the further benefit of never actually allowing Dirty Dan to swing the bat.

I don't know about the first scenario, though no doubt we'll hear much more about young Kolten this series; nor do I know for sure if Matheny manipulated events as in the second scenario. Regardless, Dirty Dan was introduced, Mejia was replaced, and Sugar Shane produced an inning-ending, rally-killing groundout.

Of Eric Fornataro and me, only one of us made his debut in the big leagues and will forevermore and till the end of time have his own page in the record books, and said person is not the one typing these words. So I salute you, Eric Fornataro. It's a great accomplishment, and I won't sully it by looking at your pitch locations and wondering if you'd be able to handle above-average major-league hitters using only your fastball. 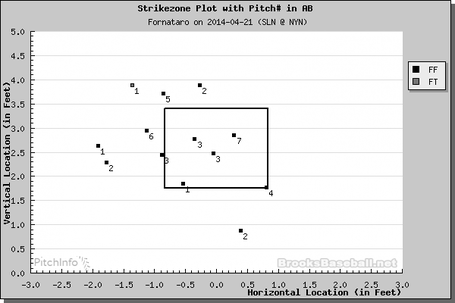 There was a cute moment after Fornataro finished warming up: Molina went out to talk to him (and I think congratulate him on making it to the Show, though I might be projecting), and though I obviously couldn't see what Yadi was saying, in response Fornataro said: "Fastball away."

Good to know he's got the catechism down.

Here are some notes:

A most dissatisfying WPA chart:

The series continues tomorrow at 7:10 central, as Adam Wainwright goes up against Dillon Gee.