Miller's command, Cardinals offense, Cardinals defense all shaky in a loss to the Washington Nationals. They settle for a series split.

Share All sharing options for: Cardinals @ Nationals Recap 4.20: Cardinals lose a game they deserved to lose

Today's game was the 591st regular season bout between the St. Louis Cardinals and the Washington Nationals.  By defeating the Cardinals, the Nationals cut into their deficit in the lifetime series, which now stands at 303-287 in the Cardinals favor.

The last time these two clubs met on April 20 was in 2011. A rainout on April 19 necessitated a twin bill on April 20. The clubs split the double header, Westbrook and the Cards losing 8-6 on the front half and Garcia leading them to a 5-3 win on the back half.

In a fink's series preview, he noted some of the injury problems that have plagued the Nationals. He also talked about the hot starts of Jayson Werth and Adam LaRoche, and gave props to Anthony Rendon. The Cards have been able to hold Werth in check, but LaRoche and Rendon have been positive contributors in the series.

He also profiled Zach Walters, whom I had never heard of, but am intrigued by. Going into this game, he was 0-1 with a walk in two pinch hit appearances. I'm interested to see his impact as the season rolls along. Also, I just noticed he was born in Cheyenne, Wyoming. That's neat.

This has been an ugly series defensively. In the first game on Thursday, the Nationals committed four errors. On Friday, the Cards returned the favor with three in the E column. Yesterday, they cleaned up their act, with Rendon committing the only error of the game. The miscues have had a major impact in the series so far. Only 12 of the 19 runs scored in this series have been earned. As it turns out, defensive bloopers were integral in this game, as well.

Matt Holliday and Kolten Wong got a day off. Jay started in RF and Craig in LF. Harper returned to the Nats' lineup. So did Jose Lobaton behind the plate.

Stephen Strasburg was very good. In the first, he dispatched the Cards in 1-2-3 fashion with two srikeouts.

The Cardinals were able to get a run across in the second, though. Matt Adams lined a double to left. Yadier flared a single to right, extending his hitting streak to 11 games. Jhonny Peralta grounded into a double play, scoring Adams. After Mark Ellis beat out an infield hit, Strasburg struck out struggling Peter Bourjos to end the inning.

The Cards were able to plate another in the fifth. Strasburg issued his first walk of the day to Peter Bourjos, who scored on a rocket of a double off the bat of Shelby Miller.

Strasburg was stingy most of the game. He struck out nine, including four in a row at one point. He was very effective. Adams was the only Cardinal that seemed to be able to figure out Strasburg, notching two doubles.

Shelby Miller again had a positive result, even if he took a windy road to get there.

Especially early on, his stuff looked good. It took him just 6 pitches to retire the Nats' first three batters. He snapped off a couple nasty-looking curveballs that looked great.

His command became a huge issue, though. In the third, he walked the bases loaded (Strasburg, Harper, and Werth), and was going deep into counts with the batters he did get out. He got out of it with no damage done with a strikeout of Adam LaRoche.

He continued to fight his command and a tight strike zone and exited after 5 1/3 IP. He only gave up four hits, and he struck out seven, but I think it's safe to say that it was a scary outing that could have gone much worse for Shelby. 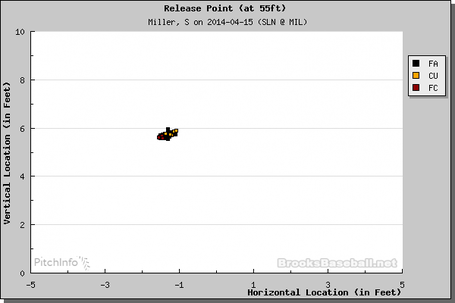 to the one from this game: 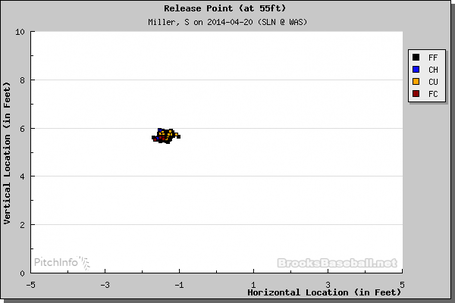 I'm not sure how his last game compares to his norm, and I'm not super-adept at analyzing these trends, but it seems to me that there's a big difference between last game and today in terms of variable release points.

The sixth inning was scary. Miller gave up a walk and a single, and then was done for the day. Randy Choate came in to relieve him. Matt Carpenter botched what would have been an inning-ending double play, loading the bases. Choate was able to induce groundouts from Denard Span and Bryce Harper to end the threat. It was a great performance from the not-so-LOOGY.

The seventh was downright infuriating. Carlos Martinez came in (along with Daniel Descalso in a double switch). With one out, Martinez gave up singles to LaRoche and Rendon. For the second inning in a row, the Cardinals relief corps induced what should have been a double-play to end the inning. Descalso couldn't come up with a hot grounder off of Ian Desmond's bat that scored LaRoche. It was ruled a hit, but I think Descalso could have been charged an error. It was a dreadful play. Danny Espinosa contributed an RBI single of his own to tie the game.

In the eighth, Kevin Siegrist gave up a hit and a walk, and was replaced by Pat Neshek, who was able to strand the two runners.

Maness came in to pitch the ninth. A couple singles and a walk loaded the bases. We got to see a five-man infield with Allen Craig coming in. Denard Span was able to hit a sac fly to Jon Jay to win the game.

Tune in tomorrow as the Cardinals head to the Big Apple to take on the Metropolitans. Tyler Lyons will make his season debut against Jenrry Mejia starting at 6:10 CT.