I know I shouldn't place too much emphasis on just one seven-inning start, but it was a thing of beauty, and in my opinion, a key factor in his success was his ability to use all of his pitches equally and effectively, especially his sinker/twoseam fastball. Waino threw his sinker/twoseam fastball on 18.79% of his pitches last year—a career low by nearly 23%. He used his fourseam fastball more often last season (a career high 20.72%), but at this stage in his career, Wainwright will need to be more reliant on pitch movement because of the inevitable decline in fastball velocity.

Well, according to another St. Louis Post Dispatch article published yesterday, Wainwright appears to have had more than just pitch selection on his mind when reflecting upon his 2013 performance:

"I could only pitch consistently to the left side last year, which made things more difficult. I was tired of pitching that way, so I changed."

By only pitching "to the left side last year," it meant that left-handed hitters could focus on pitches middle-in and right-handed hitters could key on outside pitches. Hitting a baseball is one of the most difficult things to do in sports, but when some of the guess-work is taken out, it becomes considerably easier, especially for major league hitters. Below, you will find a strikezone plot from BrooksBaseball pinpointing Wainwright's Opening Day pitch locations: 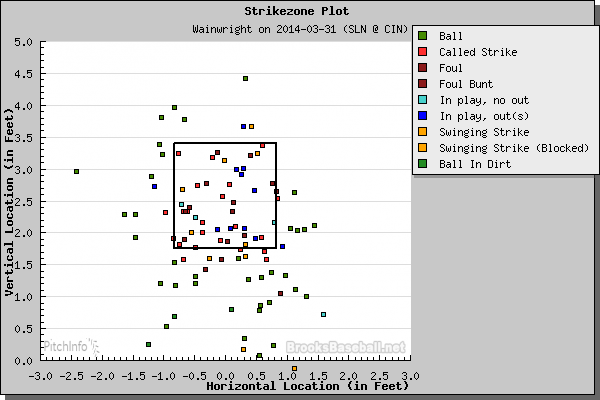 The above chart (from the catcher's point of view) doesn't appear to show any noticeable trends when it comes to Wainwright's pitch location. He went up, down, in, and out throughout his outing. He worked the corners and threw over 50% of his pitches out of the zone completely. However, I didn't think this chart could be seen as very useful without having a frame of reference. The location chart (below) from Wainwright's last start in the World Series (sorry to bring it up again) put concrete data behind Wainwright's quote I provided above: 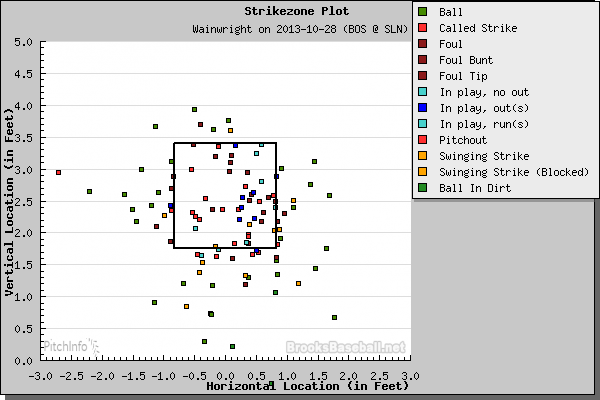 As you can see, there appears to be a legitimate trend on the right side of the chart—inside to lefties and outside to righties. Wainwright noticed it, and hitters happily noticed it. The thing that makes Wainwright a true staff ace and a Cy Young candidate each season is that despite having results (19-9, 2.94 ERA, 2.55 FIP, 6.2 fWAR) most pitchers would do just about anything to have, he knew he needed to make at least two adjustments going forward regarding pitch selection and pitch location.

Honestly, most pitchers know exactly what they need to do to become a better pitcher, but not many are actually able to incorporate these thoughts into real-life practice. How many pitchers in the MLB are capable of throwing five different pitches and four of them at a relatively equal rate? A handful, maybe? The MLB consists of the absolute best pitchers in the world, and even then Wainwright is truly a rare breed.

Unfortunately, I was unable to watch the game because of work, but for this post, I looked at each detailed plate appearance (28 in total) on BrooksBaseball and decided to detail one of the most promising ones in terms of overall approach from Wainwright:

Walk to Brandon Phillips in the 3rd Inning: 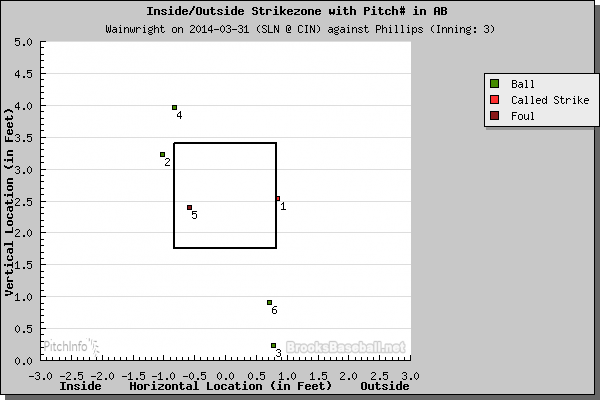 The end result was obviously not desirable considering it was a walk, but his horizontal pitch locations were fantastic—three inside, three outside, and zero down the middle. He used four of the five pitches in his repertoire in the following sequence: cutter, sinker, curveball, fourseam, sinker, curveball. If his vertical pitch locations had been slightly better, I have no doubt in my mind Phillips would have struck out.

Thus, one start is just one start, but this can serve as a template for Wainwright to follow for the rest of his career. He has some incredibly nasty pitches that can be even nastier when the hitter has no idea what is coming or where it's going.

Final note: The PITCHf/x data from BrooksBaseball only accounted for 101 pitches from Wainwright. According to the team website, Waino threw 105 pitches. I am going to give PITCHf/x a month or so to get "warmed up" before letting them know about slight disparities in their data. As usual, special thanks to BrooksBaseball for the data and charts used in this post.