What we can expect from Tyler Lyons in the rotation

Here are three things I would like to see from Lyons as he fills Kelly's spot in the rotation...

Share All sharing options for: What we can expect from Tyler Lyons in the rotation

With Joe Kelly landing on the disabled list due to a hamstring injury, all signs point to Tyler Lyons filling in while Kelly is on the mend. Thus, what can Cardinals fans expect from Lyons in the interim? Fourstick wrote an in-depth Other 15 profile on him back in February if you missed that, but I'm here to break down his repertoire, his approach, and even take a look at some of his big league starts from last season.

Upon further review, that's a damn good repertoire, especially from a southpaw. He throws fastballs roughly 50% of the time, and both have typical lefty horizontal movement, 5.91 inches on his fourseamer and 9.03 (!!) inches on his twoseamer. That's impressive. This isn't anything groundbreaking, though. Lefties always seem to have regular pitch movement and considering none of Lyons' pitches are overpowering, location and deception are integral components for his repeatable success.

This is why I included vertical release point in the chart. All of Lyons' release points are within one to three inches of each other which is pretty good, but in my opinion, this could still be slightly better. For comparison and something to shoot for with Lyons, the differences in release points for Michael Wacha last season varied from a mere half-inch to just over a full inch. If Lyons could release his fourseamer, twoseamer, and changeup all from a near identical arm-slot, he could have sustained success at the big league level. Neither fastball will overpower hitters by any means, but the movement from each should more than suffice. Eight to ten MPH is the desired drop-off between a pitcher's fastball(s) and changeup, but with Lyons topping out around 90 MPH, the seven MPH difference should be enough, especially considering the pitch averages 7.60 inches of horizontal movement.

Lyons' usage splits are pretty interesting. He consistently uses his slider against lefties, regardless of the count, but when facing righties, he chooses to only go to it when he's ahead in the count. I didn't know if this was normal for left-handed pitchers facing righties, so I compared his usage chart to that of Ted Lilly's (Don't ask me why, but whenever I see Lyons on the mound I, for some reason, think of Lilly). Nope, the large disparity between pitch usage based on the batter's handedness doesn't seem to be a trend in left-handed pitchers. I think something for Lyons to work on would be using his slider earlier in the counts with righties at the plate. He uses his changeup considerably more often against righties, which makes sense considering it moves down and away, but gaining comfort in his slider regardless of the count would be desirable and would likely make him a more effective pitcher. 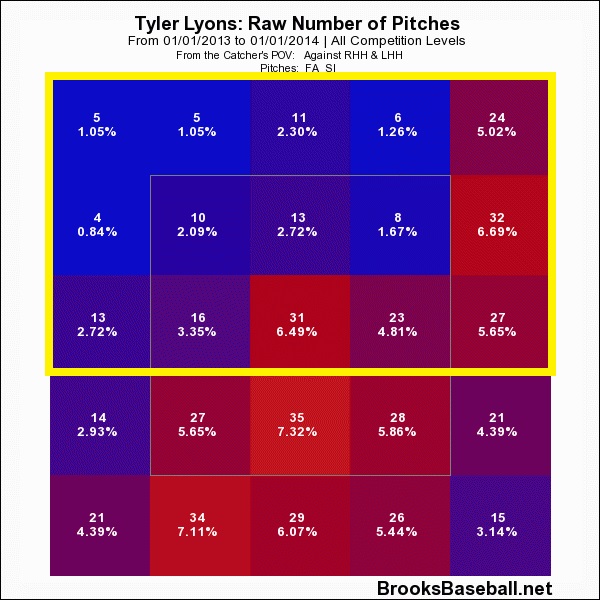 I looked through each one of his zone profiles, and I found one area of note. As I stated earlier, his ~90 MPH fastball is not going to overpower many hitters. If he sets it up correctly, it can, but in reality, it won't on a consistent basis. Well, so far in his young career, he has thrown fastballs (fourseamer, twoseamer) in the middle to upper zones (boxed in yellow) 47.71% of the time. To be blunt, I do not like his fastball in the middle to upper zones. I understand that he's going to have to pitch in the middle zones at times, especially based upon the umpire's individual zone. Yet, in my opinion, Lyons will be at his best if his fastball usage percentage for the area boxed in yellow is around 35-40%, not the ~48% it is at right now.

Lyons' top two starts from last season were his first two, on May 22 and May 28. In each, he threw 7.0 IP and allowed just one earned run. The team won both games. What was one trend from those starts? The location of his fastballs. In those two starts combined, he threw fastballs in the yellow-boxed area just 38.34% of the time. That's in the exact range I had called for in the previous paragraph. Admittedly, I picked the 35-40% range before looking at the data from these two starts, so it's nice to see that this range led to success for Lyons. Are two starts a very small sample size? You better believe it, but I don't think many can argue that Lyons is at his best when his fastballs are down in the zone.

On June 16 against the Miami Marlins, Lyons got rocked. He allowed six runs on eight hits over five and one-third innings pitched. His WPA was a woeful -0.318, and the Cardinals lost 7-2. I looked at his zone profile from this game as well, and sure enough, his fastball usage was quite telling. 64.68% of his fastballs were in that yellow-boxed middle to upper zone. That's the same zone I just said would be best for him to be in less than 40% of the time.

Thus, there are three concrete things I would like to see from Lyons during his likely brief stint in the rotation. I would like even more uniformity of his vertical release points -- especially with his fastballs and changeup. I would like him to use his slider earlier in the count to right-handed hitters. Finally, I would like him to make it a primary focus to live down in the zone with his fastballs. I know it's not that easy, but Lyons has the stuff to be a pretty good big league pitcher; now it's time for him to execute on a consistent basis.