On Jackie Robinson day 2014, Cardinal fans were treated to a team performance with a lot to like. The Birds beat the Brewers 6-1 after taking the lead in the 2nd inning and never relinquishing it.

The part about Yadi

"Thou shalt not cheer when a player gets hit by a pitch" is found under sub-heading "Thou shalt not cheer when a player gets injured" on page 1 of the "how to not be a sports asshole" fan-guide. Now, Miller Park is a lovely place full of lovely people. I've had many happy experiences there, and I'll just go ahead and say it, some of my best friends are Brewers fans. So this isn't to indict the lot of them, but tonight an audibly large percentage of the crowd cheered when Yadier Molina was plunked by an astray Estrada pitch in the 2nd inning.

The gods of baseball are mysterious and fickle, but tonight their ruling was clear as a bell. That ugly cheering sent the Brewer's win probability, which had not been below 50% yet in the game, down to 49.7%. Yadi went on to score the first of his 3 runs, and the Brewers' WP plummeted like Ryan Braun's Q Score.

I enlarged the moment of Yadi's HBP here and you can clearly see the ruling of the GOB's, sent down from on high by GOB member Jackie Robinson himself, or at least one of the GOB's throwing bolts of order with Jackie's number. It is hard to tell. 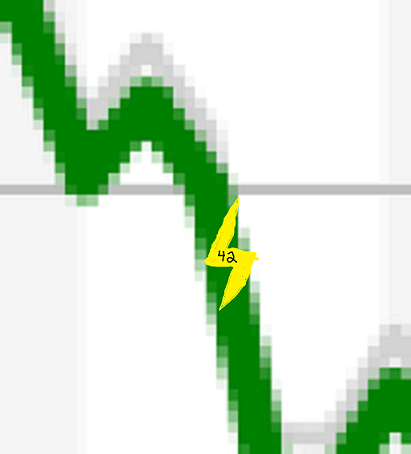 The Part about Shelby

Ok. It was better. I think. There's good and bad.

Let's start with the good. 7 K's against 3 BB's and 3 hits with a run over 6 innings is peachy. All 3 walks were in the 1st two innings, and of the 3 hits he allowed after that, only Aramis Ramirez' homer was hit hard, so it's pretty easy to argue he settled in after some early wildness and pitched well after.

He threw hard. The data feed wasn't working until the 3rd inning, but Miller averaged 94.8 mph on his four-seam from that point forward. It's hard to know if he started off that hot, but outside of one abbreviated start in August, that number would be the best he averaged since his first game after last season's All-Star Break.

He did a nice job hitting the outside corner against the Brewers' nearly all-righty lineup. Let's take a look at his pitch location, which will transition to the bad. Again, this is just the plot of the 3rd through the 6th inning.

This is the period when he didn't walk anyone, so it's safe to say the chart would be much uglier if it included those first 2 innings. He walked Lucroy on 5 pitches and Davis on 4. You can see the cluster of swinging strikes he earned and all the called strikes on the outer-half, but he missed plenty. A number of pitches were not just up, but way up. He also peppered the middle of the zone, one of which was the pitch Ramirez deposited in the seats. Yadi wanted it on the outside corner.

Other than one cutter that acted like a nasty slider to Ramirez in the 6th, nothing other than his four-seamer looked terribly impressive, and I'm not convinced we saw good pitching as much as a rough night at the plate for the Brewers.

To be fair to Shelby, the velocity was good, and there were a good number of swinging strikes. Further, even when he was good for extended periods last season, my eyes weren't sharp enough to always be able to explain why. I'm by no means calling tonight's performance bad, but I also am not going to go to sleep thinking I saw a major breakthrough. I'll call his work tonight hopeful instead.

Matt Adams and Jhonny Peralta each made outs on the basepaths at 3rd in the 4th inning. Adams was leading off the bag when Peralta hit a scorcher to Brewers 3rd baseman Aramis Ramirez. Adams might have been able to make it back, but it was no sure thing. He hesitated, took off for home, and managed to stay in the run-down long enough for the other runners to advance. Later in the inning, Peralta rounded 3rd coming from 2nd on a hard Bourjos grounder. He was looking to score, but Brewers SS Jean Segura, who made several good plays in the field, ranged to his left to field the ball and quickly fired to 3rd behind Jhonny, nabbing him easily. The twitterverse howled at each play, but I don't have a problem with either. Adams was in the wrong place at the wrong time and did well to create a run-down. Peralta was the victim of a heads-up and unusual play by Segura. We're not going to discuss Allen Craig getting picked off of 2nd, though.

The Cardinals and Brewers finish off the 3 game series tomorrow at 12:10 central. Joe Kelly (bless him!) and Wily Peralta are pitching.