Peralta and Jay hit home runs so Craig doesn't have to.

Share All sharing options for: Cards at Brewers Recap 4/14: Lynn and Martinez dominate Brewers in 4-0 win

Carlos Martinez was fire, Matt Carpenter spoke truth to power, and Allen Craig hit a fly ball and a line drive in the same game, as the Cardinals took the first game of the series from Milwaukee--and on Milwaukee Day.

Entering tonight's game, Lynn had faced 20 left-handed batters, walking just one, striking out two, and giving up one homer. Sixteen of those PAs, then, had ended with his pitch being hit into play. His BABIP against lefties was .533.

His start tonight was excellent: 7 IP, 3 H, 0 ER, 3 BB, 11 K. But as dominant as he was, it wasn't proof that he's figuring out his platoon split: two of his strikeouts were against a lefty, but that lefty was Scooter Gennett, and those strikeouts were looking, and the strikeout pitches were called by Bob Davidson, new adopted to our hate.

Still, his seven innings were a reminder that Lynn's fastball is really hard to hit. Even the best hitters in the world have trouble hitting it, and of course I'm talking about Ryan Braun, whom Lynn struck out swinging twice on fastballs up in the zone. Lance Lynn is a great pitcher when he's throwing fastballs up in the zone to right-handed batters, which see this heat map: 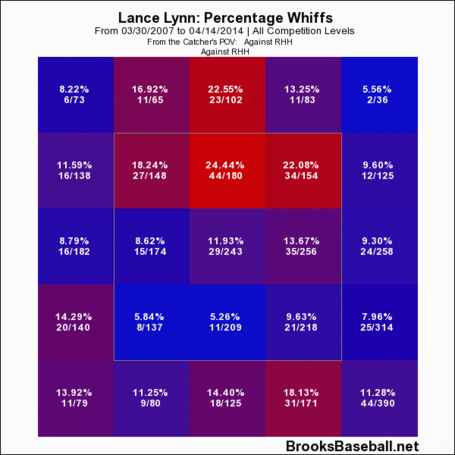 Lynn's final pitches were in the seventh inning (after Jhonny Peralta booted an inning-ending grounder) against pinch hitter Mark Reynolds, who for his career has struck out more than a third of the time he's faced a right-handed pitcher. Just throw it down central, Lance-- 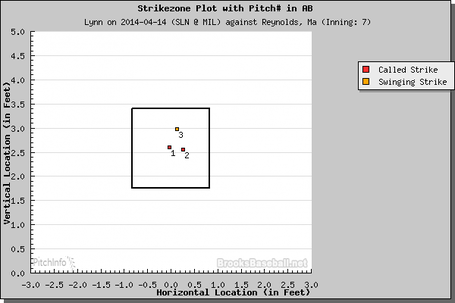 Here is a heat map of Jon Jay's isolated power percentages by zone: 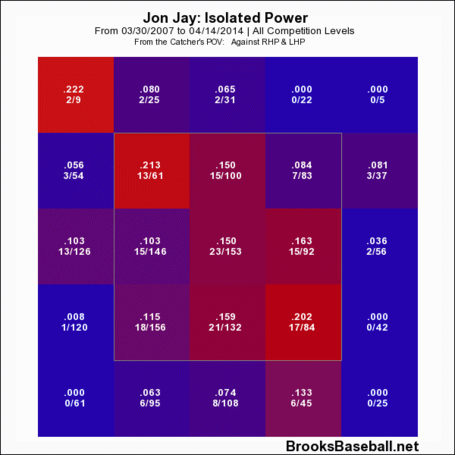 Jay's homer began life as an offspeed pitch from Garza thrown down in the zone and inside, where Jay has a career .202 ISO. This is a moment where the data and the world they describe shake hands. You see the graph above, and you probably have an idea in your head of what an offspeed pitch low and inside to Jay looks like, and you also know just the type of upper-cut swing he'd have to put on that pitch to take it over the wall in right field. Well what's in your head is just exactly what happened.

Before tonight's game, the Craigen was floundering on the abyssal floor of Fangraphs' hitter leaderboards, with a -14 wRC+ and -0.6 fWAR. After last night's game--which offered the very encouraging sight of Craig hitting both a fly ball and a line drive--well, he's still down there, but at least his wRC+ is slightly less negative now.

The pitch that the Wrench turned for a line drive over the second baseman's glove was a splitter in the middle of the plate--slightly down, slightly outside--and as I said, he hit it for a line drive. So the good news here is that Allen Craig hit what is classified as a line drive last night, for a single. The bad news is, here's what his opposite-field hits used to look like, very not long ago:

The Jackal came into the game in the eighth, and what he did to the top of the Brewers' lineup was beautiful.

First, Carlos Gomez (who struck out three times last night) struck out swinging through a devastating changeup. Jean Segura then hit a slow sad grounder to short, where a young ballplayer named Peter Kozma--who had just taken over for Peralta and would later hit what I assume is his first single in the major leagues--threw it to first base for the second out. Finally, after having thrown six straight 98-mph fastballs to Gomez and Segura, Martinez threw Ryan Braun a 99-mph fastball for a strike and followed that with an 85-mph cambio that Braun got way out ahead on and popped up to Peter Kozma for the third out.

A couple of notes: 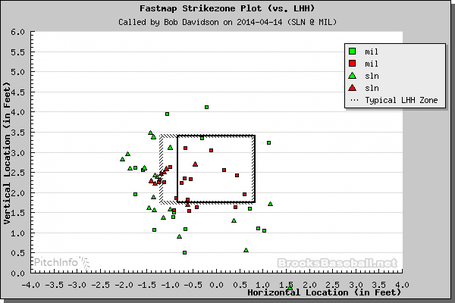 and you'll notice that it's beyond not only the ideal strike zone but also the customary strike zone. And if you tell me that Matt Carpenter should expand his zone with two strikes, or that Bob Davidson's strike zone is especially wide to lefties and Carp should adjust his approach to the peculiarities of Davidson's zone--I'll stamp my feet and say that it's not Matt Carpenter who needs to change.

A most satisfying WPA chart:

The series continues tomorrow at 7:10 central, as the beleaguered Shelby Miller goes up against the so-far-so-good Marco Estrada.