Today's game was the 2328th regular season bout between the St. Louis Cardinals and the Chicago Cubs (I know, the math doesn't add up. I'm not sure why. Ties? Games started but not completed?). By winning, the Cardinals closed the gap in the lifetime series against the Cubbies, which now stands at 1128-1181.

The last time these two clubs met on April 13 was in 2012, when the Cubs were able to chase Adam Wainwright after only 3 inning. Jeff Samardzija and the Cubs won 9-5.

In a fink's series preview, he took a look at some of the Cubbies that might have an impact. The only one that really played a factor in this particular game was Anthony Rizzo.

During the series, we've seen some strange things play out. If I were to tell you that Trevor Rosenthal hit for himself in extra innings at home with a runner in scoring position with three relievers available to use, would you expect that the Cardinals would win that game? They didn't. Fortunately (I guess), the Cardinals lost the game quickly enough that the bullpen wasn't "used up" for the rest of the series. Adam Wainwright helped by posting 7 innings of give-your-team-a-chance-to-win baseball yesterday. Similarly, Chris Rusin was able to provide relief for the Cubs' pen, racking up 5 innings after the Cards' offense came alive and chased starter Carlos Villanueva after only 3 innings yesterday. Rusin was sent out before today's game in favor of Blake Parker.

Mike Matheny threw out what has become a pretty standard lineup to start today. With all the talk in spring training about who would occupy the second spot in the order, Kolten Wong seems to have earned it for the time being. Matheny has tried Jon Jay and Peter Bourjos there one game each and Jhonny Peralta for two. Peralta returned to the lineup today after a day off. Wong helped his cause for hitting high in the order by going 2-4 and driving in a run today.

Michael Wacha was good with really only one big mistake and one bad luck inning after a rain delay.

In the first inning, Anthony Rizzo clubbed a two run homer after a Justin Ruggiano single.

He left a 93 m.p.h. fastball out over the plate that Rizzo had no problem getting a good bat on: After that, he settled in. He worked around a Matt Carpenter error with no problem in the second, and helped himself by picking off Ruggiano in the third.

Coming back from the rain delay in the fourth, Wacha allowed a walk, a HPB, and a Welington Castillo RBI single to tie the game. He pitched into the seventh without much drama.

Trevor Rosenthal allowed a one out triple to Junior Lake, a Mike Olt RBI single, and hit Castillo with with a pitch but was able to limit more damage. He struggled through to earn his fourth save.

Jhonny Peralta finally got his first non-HR hit of the season in the second, when he lined a hard single down the left field line.

With two outs, Matt Carpenter worked a six pitch at-bat that resulted in a single that tied the game at 2-2. It was really a turning point in the game, both in terms of score and making Jackson work. He Let's take a look at the pitches he dealt with: 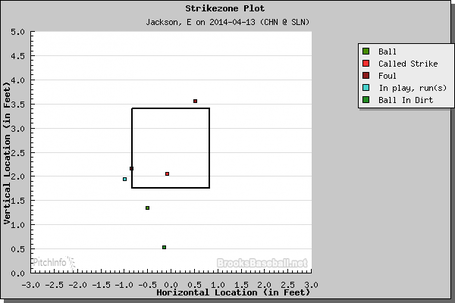 The pitch he singled up the middle was an 85 mph changeup.

The at bat wasn't quite as impressive as this, but still cool.

Wong put the Birds on top by driving Carpenter in after Carp's game-tying single and a stolen base.

After a leadoff single by Yadier Molina in the third, Jerry Layne needed a break, so he called for the tarp on the field with a 1-0 count on Allen Craig. Jerry and the weather did their business, and the game returned after a 46 minute rain delay. Both starting pitchers were able to remain in the game. Jackson made quick work of Craig and Peralta to complete the third.

Peter Bourjos led off the bottom half of the fourth with a triple into the right field corner. Carpenter drove him home with a sacrifice fly to take the lead back 4-3. It was Carpenter's third RBI of the game.

The Cardinals struck again in the eighth. With Blake Parker pitching, Molina singled. Then Craig singled. Then Peralta doubled, scoring Molina. With the infield drawn in, Bourjos dribbled a grounder to Olt, who booted it, and then made an ill-advised throw home to try to retire Craig. Craig scored on the play, which was scored a fielder's choice.

(note- not the final update)

Remember to get your 50 cent drinks at On-The-Run at Mobil tomorrow.

Tune in tomorrow as the Cardinals hit the road to take on the Brewers of Milwaukee in a three game set. Lance Lynn will look to defeat Matt Garza and snap the Brewers' nine game winning streak starting at 7:10 CT