Joe Kelly takes on Stephen Strasburg and the Nats in a rematch of yesterday's tie game. This time it's on tv!

It's obviously far too early to even consider leaders and stragglers in the spring competitions, but Joe surely hopes to do better today than he did in his first outing. It's unclear whether the 5th spot in the rotation is truly up for grabs out of camp, but Carlos Martinez currently leads the team in innings pitched. We'll see.

The Cardinals have something of a B team out there today, but Bourjos returns to the field and Good-Looking Sam Gaviglio is in the pen.

The Nationals hope to return to the playoffs this year after missing out last season. Beating the Braves won't be easy, but if things break right for them, they could be world series contenders.

-Is Bryce Harper ready to be an MVP candidate now or will that take another year or two? (presumptuous language intentional)

-Will Stephen Strasburg, with two post-surgery seasons behind him, finally cash in on his enormous potential and enter the Cy Young conversation?

-Jayson Werth was slightly better than Matt Holliday last year. Can he be that good again in his age 35 season?

-Is Doug Fister healthy? He has elbow inflammation with a clean MRI.

-There really is a lot to like. Gio Gonzalez, Jordan Zimmermann, Ryan Zimmerman, Ian Desmond, Anthony Rendon, Denard Span, and Wilson Ramos are all good ballplayers. This could be a team with two true superstars and a strong supporting cast, or it could be a team with two very good players and a roster full of aging and previously over-achieving decent guys. Where do you peg them? Throw a dart between 82 and 102 wins for my prediction.

-They don't have much help on the way offensively, but AJ Cole is a pitcher to keep an eye on. He was signed by the Nats out of high school, started off well for them, went to Oakland in the Gio trade, fell to pieces, came back to Washington as part of the 3-way Morse trade, and was excellent last season in high A and double A. Now he's in camp and has 7K's and no walks or runs in 6.2 IP. I hope we get a peek at him. We won't be seeing Lucas Giolito, unfortunately. He's getting scouts and analysts quite worked up lately.

My extensive and thoughtful breakdown of the Washington Nationals farm system: "Good system. They have Lucas Giolito." 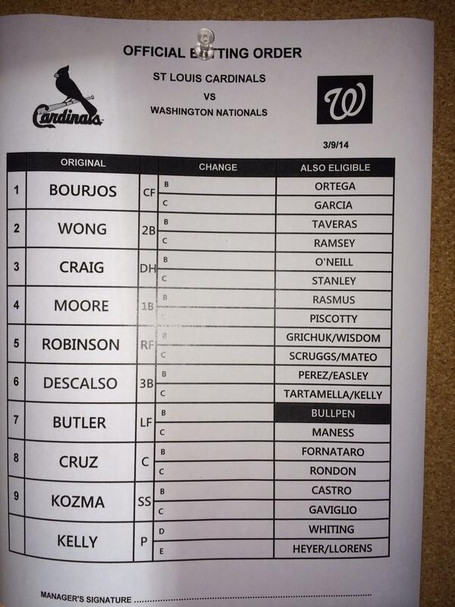 Rendon at third, Espinosa at second, and Zimmerman at first is something we might see more of down the road if Zim's shoulder woes are not behind him.

The game gets underway at 12:05 Busch Stadium Sprung Time. KMOX has it, and mlb.tv will stream the Washington video broadcast.