For the Cardinals, One OOGY Reliever Is Enough

Share All sharing options for: For the Cardinals, One OOGY Reliever Is Enough

Perhaps the greatest alphabet soup name to be born out of sabermetrics is the One-Out Guy or "OOGY." Lefty One Out Guys are known as LOOGYs. Righthanders, ROOGYs. OOGYs get their name from their skill set. They are so good at getting out batters of their same handedness (e.g., lefty pitcher vs. lefty batter) – and so bad at getting out batters of the opposite handedness (e.g., righty pitcher vs. lefty batter) – that they are One Out Guys. That is, a manager can only use them to get out one batter if the next batter due up has the platoon advantage against the OOGY.

Last offseason, the St. Louis Cardinals signed Randy Choate, a lefthanded reliever who is extremely good at neutralizing opposition lefthanded batters but not so good against righthanded hitters. Choate is a prototypical LOOGY. If deployed correctly out of the bullpen, Choate is a useful player. To manager Mike Matheny's credit, he did a good job of using Choate predominantly against lefthanded batters last season. 70.2% of the batters Choate faced in 2013 were lefthanded, compared to 57.2% for his career.

The relative success the Cardinals had with Choate a year ago made the club's decision to sign sidewinding ROOGY Pat Neshek to a minor-league contract with a non-roster invitation to MLB camp this spring an interesting one. On the one hand, Matheny did well leveraging Choate's LOOGY skill set in 2013. On the other, given Choate's contract, he is a sure bet for the opening-day bullpen. Can the bullpen handle another OOGY in the form of Neshek without overly taxing the remaining relief corps members?

In the St. Louis Post-Disptach this week, Derrick Goold reported that Matheny believes one OOGY is enough:

Matheny said he’d like to see Choate face righties this spring and Neshek handle lefties before adding the righty specialist to the bullpen.

One wonders what Matheny expects to see. Both pitchers have been plying their trade as members of the OOGY guild for years. Whether it's DIPS-based metrics or batter results, it's clear that neither Neshek nor Choate should be deployed as anything other than an OOGY. 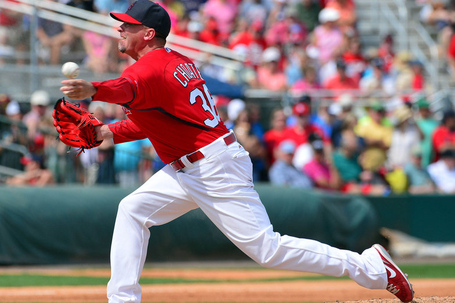 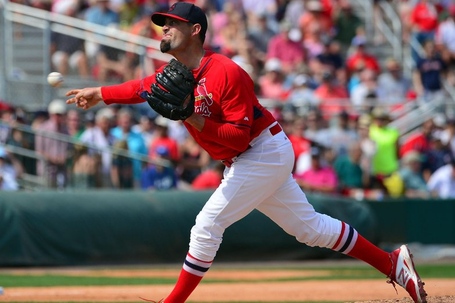 Just as leopards don't change their spots, OOGYs don't change their splits. If Matheny is serious about not carrying more than one OOGY for fear of wearing down the other relievers with too much work, then perhaps the Cardinals should cut Neshek now so he has a shot of making another squad for opening day.