By signing Matt Carpenter to an extension worth at least six years and $52 million, the Cardinals are gambling that the skills he has shown during his MLB career will make him a core player for years to come.

Matt Carpenter is a joy to watch play baseball, especially at the bat. Carpenter digs in sans batting gloves. He takes his time as if to signal to the pitcher that this is going to take awhile. It'll be a grind.

Carpenter is a pitch snob. Only a pitch to his liking will do. The best, to Carpenter, are offerings that he can lace for liners. Carpenter will only uncoil his finely tuned swing at pitches that he can rip, inside or outside the zone. Anything else, he'll take.

This approach produced a remarkable 2013 season for Carpenter.

At age 27, it was Carpenter's first year as a regular big-leaguer and he spent it at a brand new position. Carpenter responded by leading the league in hits, doubles, and runs while posting a .318/.392/.481 batting line. Carpenter's batting, baserunning, and fielding equaled 7.0 Fangraphs Wins Above Replacement (fWAR). It is the first time a Cardinal has reached the 7.0-fWAR plateau since Albert Pujols in 2010. But the Cardinals' decision to extend Carpenter isn't so much based on his 2013 batting line or fWAR total as it is the skills that helped propel him to those numbers. And those skills show up in Carpenter's peripheral stats.

Carpenter rarely comes up empty on a swing. Swinging Strike Rate (SwStr% on Fangraphs) measures the share of a player's strikes that are swings and misses. Carpenter's SwStr% of 4.1 was the ninth-lowest among qualified hitters a year ago. This is an indication of both his selectivity and contact skill.

Carpenter's patient plate approach often digs him a two-strike hole. But with Carpenter's batting eye and hand-eye coordination, the pitcher isn't at the advantage he typically enjoys in such counts. Carpenter worked 384 two-strike counts in 2013, the third-most in baseball. He had 95 hits in such counts, which led all players. His .780 OPS in two-strike counts was second among qualified batters, behind only Miguel Cabrera's .788 (in 290 PAs).

Simply put, it's difficult to strike Carpenter out. In MLB a year ago, non-pitchers struck out in 19.3% of their PAs. Carpenter K'd in just 13.7% of his PAs. (Don't forget that Carpenter led baseball in seeing two-strike counts.) His strikeout rate ranked 33rd lowest in game out of 140 qualifying non-pitcher batsmen.

When Carpenter elects to swing at a pitch, his ability to barrel it for a line drive is uncanny. He laces frozen ropes around the yard, often for singles and doubles. The Texan led the league in two-sackers a year ago. Sometimes one of Carpenter's line drives will carry over the outfield wall, but not often. Carpenter's game is liners, not towering flies.

The league-average line-drive rate (LD%) a year ago for non-pitchers was 21.3%. In 2013, Carpenter hit for liners at a 27.3% clip, which ranked sixth in the majors among non-pitchers who qualified for the batting title. The LD% strikezone map for Carpenter's career, courtesy of Brooks Baseball, gives us an idea of just how skilled the TCU alum is at barreling the ball for a line drive: 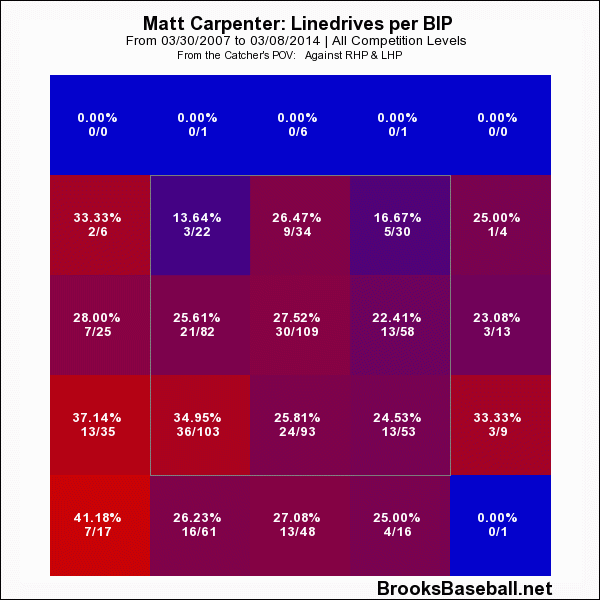 Every multi-year contract is a gamble. The club is betting that the player will maintain his health and produce at a level to justify his salary over the length of the deal. This is true whether the contract is one reached with a free agent on the open market or an extension that buys out a player's cost-controlled years. The Cardinals' six-year extension with Carpenter is the club's bet that Carpenter's skill set will allow him to be a cornerstone player for years to come. Given Carpenter's batting approach and skill at making solid contact, it appears that the Cardinals' $52 million gamble on him is one that's likely to pay off.