Since we saw all of their starters last October, the Red Sox signed someone new to throw at us for this afternoon's Spring Training matchup. We're countering them with a pitcher they didn't see either. Shelby Miller gets his first action of the spring against our old friend Chris Capuano.

On the Cardinals side, I'm most excited about seeing Shelby, of course. While his health isn't something anyone seems overly concerned about, it'll be good to see some pop on the fastball, and it'll be interesting to see how/if he utilizes his cutter this spring. Write down what you think about him right now. By this time next year, he could sit a bit more firmly on a path to being a star or just a solid pitcher.

Based on yesterday's quotes from Matheny about Wong needing some confidence (Hummel article here), we likely will not see him in the game until Capuano leaves, but it'd be nice to see Kolten get a couple of hits.

According to Goold, Yadier Molina is behind the plate today for the first time, and we'll also have out first chance to see the replay system, active today.

Chris Capuano has thrown nearly 100 innings against us in his career, mainly for the Brewers from 2005-2007. Yes, he's a soft-tossing lefty. No, we did not struggle against him (career 6.00 ERA against us in 93 innings and 17 starts, the most of any team). He's expected to be a member of the Red Sox pen and serve as their sixth starter, replacing Ryan Dempster, who abruptly decided not to play in 2014.

Capuano has had an admirable career, coming back from two Tommy John surgeries, the second of which required several years of recovery. He surprised by pitching nearly 200 innings in 2012, and last year he showed career-high velocity in his summer starts while pitching around a series of minor injuries. He holds a degree in economics from Duke and once appeared on The Young and the Restless with Jeff Suppan. And now you know.

One story to keep an eye on is Grady Sizemore taking on Jackie Bradley, Jr. for playing time in the wake of Jacoby Ellsbury's departure. I'm rooting for Grady. 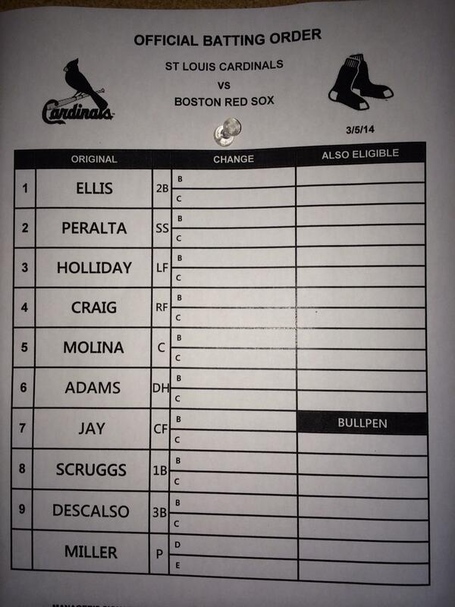 Gametime is 12:05 Busch Stadium Standard time. FSMW and mlb.tv have the game.