Adam Wainwright and the Cardinals defeat Johnny Cueto and the Reds 1-0 in an outstanding seven inning game.

Before we get to the recap, I'd like to take a minute to formally introduce this series and the writers who will be producing it for you. We will be providing a recap of every Cardinals game this season. Day games will be recapped in the evening, and night game recaps will be published at 6:00 AM every morning. We have two main goals for the series.

First, for those who missed the game, we'd like these to serve as a VEBcentric account of the game that will be a useful addition to standard news outlet game stories. While we'll provide a brief standard recap, the majority of what we describe will tend to be more detailed accounts of key moments to be read in addition to a typical recap, not instead of.

Second, for those who did see the game, we want to provide some analysis of key moments or decisions, or at least draw attention to things deserving discussions.

Each writer will have their own way of doing things, but we all have the same goal: We want these to be a valuable resource for VEB's readers.

I'll be writing some recaps, often on Tuesday evenings, but I'm sloughing these off on the rest of the writers as best I can!

WyoCardsFan will generally handle Sundays, Santioagofish Mondays, Rui Wednesdays, The Continental Thursdays, Dr. Howl Fridays, and IHeartBoog Saturdays. Lil_Scooter93 will take most day games after May 1, and stlcardfan4 will fill in frequently when we have scheduling conflicts.

Please let us know what you do and do not find useful and if you have ideas you'd like us to consider including. We're hoping that this feature will evolve into something essential for the site.

Oh, one more note: Recaps posted in the evening would be excellent opportunities for late-night VEB and general MLB watching.

Today's game was a beautiful way to open the season. A gorgeous day in Cincinnati saw two outstanding performances by two of the NL's best starting pitchers. Adam Wainwright got the win courtesy of Yadier Molina's solo home-run. The lone score of the game came with one out in the top of the seventh as Johnny Cueto left his 88th pitch of the game, an 88 mph cutter, a little higher than he intended. Yadi sent it 368 feet into the left field stands.

Both pitchers were excellent. Each had a number of looking K's, often on fastballs down at the corners. Wainwright threw his two-seam, four-seam, cutter and curve each around a quarter of the time, and Cueto worked primarily off of his two-seam and four-seam with half as many cutters. Changeups were relatively rare for each, and Cueto sprinkled in just a handful of sliders. As good as Wainwright looked, Cueto actually looked a little better in my opinion. He just had the misfortune of leaving one of the few pitches he did up at the wrong moment.

Wainwright's 4 walks, as unusual as that number is, is not any cause for concern. One was intentional, and another was a clear pitch-around. On the other hand, the 9 K's were inflated by Billy Hamilton's terrible day at the plate. He struck out all four times he stood in the batter's box, once looking on a cutter, and thrice swinging at curveballs. If you want a look at Hamilton's flailing, watch his strikeout in the bottom of the third. The ball landed well before it reached homeplate.

The bottom of the eighth inning was dramatic. With a full bullpen and two lefties (Bruce and Votto) due up second and third, Mike Matheny elected to pitch Pat Neshek against Brandon Phillips. Phillips walked on a full count, and Neshek was removed for Siegrist. Siegrist got a groundball from Votto, but Wong whiffed on it. With runners on 1st and 3rd and nobody out, Jay Bruce hit a chopper to Matt Adams. Adams alertly ran directly at Phillips, who froze and was tagged out after a brief rundown. Carlos Martinez, who many called-for over Neshek at the beginning of the inning, got a first pitch grounder from Ludwick on a nasty two-seamer. However, Matt Adams simply dropped the throw on the back-end of a sure double play. It proved irrelevant as Martinez struck Todd Frazier out looking on a curve that made me exclaim "oh wow" in an empty room.

Trevor Rosenthal was dominant as usual in the 9th. His changeup to strikeout Brayan Pena was one of the best pitches of the evening.

Matheny made two decisions that drew the ire of many in the gamethread and the twitterverse.

First, with two outs and Todd Frazier on second, Matheny elected to have Waino walk Brayan Pena to get to Johnny Cueto, he of the career .104 wOBA.

"En serio Matheny?" is set to become the first VEB meme of the new season.

I actually didn't hate the decision. Pena isn't a great hitter, and he won't take a walk if you paid him, but he puts the ball in play a lot. The benefit of how much worse Cueto is than Pena with the runner is reasonable to take over getting to start off the next inning with Cueto in a scoreless game. I don't know that I would have made the same decision, but I find it defensible. Still, En serio Matheny?

I was less happy with Matheny's decision to open with Neshek against Phillips in the eighth. The walk to Phillips saw a 10% WPA bump. He was a big out to get and a dangerous enough hitter in his own right. I think Martinez was being saved as a fireman for the inning or the long-man should the three most dangerous men in the Reds lineup manage to tie it, but it's best to not need the fireman. It's not like Rosenthal couldn't go an extra out or two if things got tight.

Here is the fangraphs WPA graph. It vividly illustrates the the eighth inning drama.

A few quick notes, and I'm shutting this thing down:

-Bourjos showed off his range today. Playing deep, he caught a Jay Bruce flyball in shallow center. Jon Jay would not have made that catch, at least not if he started as deep as Bourjos. As mojo put it:

In the fifth, he tracked down a ball in the left-center gap, but dropped it. It would have been a double off of most center-fielders. It was an error off of Bourjos. So it goes. He's really, really fast out there.

-Rick Horton said that Jhonny Peralta was not a "flamboyant fielder". We were puzzled. WMT figured out exactly what Ricky meant:

Despite the insult, Bonny Jhonny actually made a couple of fine plays today. One to his left, while spinning, and just missed another on a tough nubber he had to charge.

-Matt Adams beat the shift twice. A regular grounder to left bought him a single, and he doubled on a cue shot down the left-field line.

-Matt Carpenter is continuing to move across the diamond to deep second when the Cardinals shift against pull lefties.

-In something of a surprise, Wong batted second today. Kolten drew a tough walk from Cueto in the first, and he laid down a beautiful bunt for a hit in the bottom of the seventh.

-Cozart had a pair of excellent plays, snaring liners from Sugar Shane and Bourjos.

-And, uh, the times they are a-changin'. I didn't watch the post-game show, but lil-scooter did. This was on screen during a FSMW broadcast: 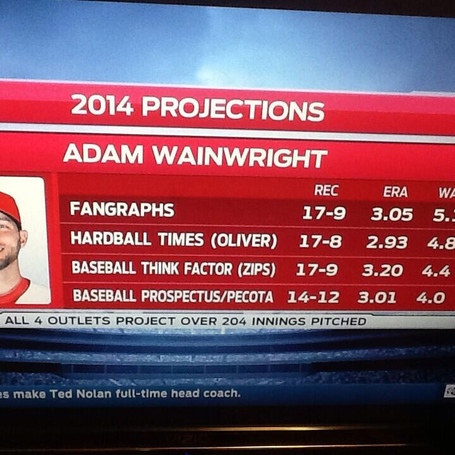 Tomorrow is an off-day. Game 2 of 3 is at 6:10 central on Wednesday, featuring Michael Wacha and Tony Cingrani.