The Pittsburgh Pirates were the St. Louis Cardinals' strongest competition last year in the National League Central. Will the Buccos challenge the Cards again in 2014?

Last season, the Pittsburgh Pirates broke a two-decade long postseason drought. The Buccos finished second in the NL Central and qualified for the Wild Card play-in game. Pittsburgh won and moved on the face the Cardinals in the NLDS. After falling behind to Pittsburgh 2-1 in the best-of-five series, the Cards staved off elimination twice and bested the Pirates before going on to win the NL pennant. Will the Pirates be one of the clubs standing in the Cardinals' way again this October?

The Milwaukee Brewers had a disappointing season in 2013, highlighted by their star player's suspension for PED use. There is some hope for optimism in 2014, with Ryan Braun's return and a solid rotation backing a potential surprise team this season.

Last year, Andrew McCutchen put together yet another exceptional season for Pittsburgh. The Pirates center fielder combined exceptional defense with an elite batting line of .317/.404/.508 to win the NL MVP. It's a joy to watch McCutchen play ball right now (unless he's tattooing a ball off Cardinals pitching or robbing a St. Louis batter) and there's no reason to believe that he won't once again be in the MVP conversation at the end of 2014.

Starling Marte broke into the big leagues in 2012 and struggled a bit with a .257 BA and .300 OBP, but had a breakout season in 2013. Marte batted .280/.343/.441 and played great defense in left field. The Pirates liked what they saw enough to ink Marte to a six-year, $31 million contract extension earlier this spring. Marte doesn't walk much at all, so it will be interesting to see how he produces this year and in the future if his BABIP drops below the .363 level he posted in 2013.

The Cubs won't be very competitive in 2014, but that's because their plan is to be super-competitive down the road.

The Pirates' signing of Russell Martin to a two-year deal worth $17 million might be one of the best signings in baseball over the last few years. The veteran backstop delivered the value of his contract and then some last season, generating 4.1 Fangraphs Wins Above Replacement (fWAR) between his top-notch defense behind the plate and .226/.327/.377 line while at it. His ability to get on base and power are repeatable skills, while his .266 BABIP seems likely to rise this season and bring his BA, OBP, and SLG up with it.

Last season, A.J. Burnett was the Pirates' best pitcher. The veteran notched 191 innings. No other starter topped 161 (lefty Francisco Liriano's total). Burnett also posted the rotation's highest strikeout rate. The sinkerballer was very good and finished the year with 4.0 fWAR to his name. The Pirates did not extend Burnett a qualifying offer, and were unable to sign him as a free agent. He ultimately signed with Philly and the Buccos wound up with Edinson Volquez, who managed just 0.4 fWAR in 2013 while pitching in Petco Park and Dodger Stadium. Volquez will apparently start the season in the Pittsburgh rotation. That's a 3.5-fWAR gap to be made up by young up-and-comer Gerrit Cole, Wandy Rodriguez, Liriano, and the rest of the rotation. 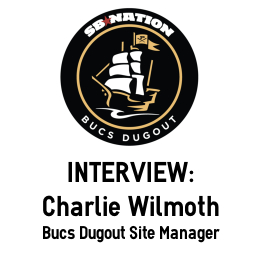 Charlie Wilmoth, the site manager at our SBN sister site Bucs Dugout, was kind enough to agree to answer a few of my questions about the Pirates. Charlie has been rather busy of late. He authored Dry Land, a book on being a Pirates fan that is now for sale. From what I've read, it's terrific and I recommend you check it out. (There's more information below.) You can also read Charlie's piece on why he thinks Pittsburgh can win the pennant here. Below, my questions are in boldface; Charlie's answers are in regular typeface.

What should Cardinals fans expect from the Reds in 2014?

1. What grade would you give the Pirates' offseason? Why?

Did the offseason happen already? It's only mid-November, isn't it? I just woke up. I dreamed they just signed Edinson Volquez or something.

2. What happened with A.J. Burnett?

The Pirates just didn't want to, or couldn't, pay him. It seemed like they had a budget of around $18 million to make moves this offseason, and they had to address not only their starting rotation, but also first base and their utility infield position. Rather than paying Burnett, who would have taken up a big chunk of that budget, they tried sign Josh Johnson and James Loney. That didn't work, and the Pirates were left holding the bag.

The key issue, apparently, is that the Pirates had a number of needs, and didn't have a serious budget with which to address them, even preceding a season in which they figured to be competitive. As a fan, that's tough to take.

3. How do you see the Pirates starting rotation playing out over the course of the season?

They'll have Francisco Liriano, Gerrit Cole, Charlie Morton, Wandy Rodriguez and Volquez there to start the season, with Jeff Locke and/or Brandon Cumpton filling in if there's an injury. Top prospect Jameson Taillon will be a factor at some point as well, although right now he's shut down with an elbow injury. Much of how the year unfolds will depend on whether the Pirates can turn Volquez around.

4. How good will the Pittsburgh bullpen be this season?

It's a strong bullpen, particularly if Bryan Morris and rookie Stolmy Pimentel can contribute. Morris was horrible last year, but reports on his stuff this spring have been encouraging. Jason Grilli and Mark Melancon likely won't be able to match their otherworldly 2013 heights, however.

5. Which prospect do you think will have the biggest MLB impact for the Pirates this year?

Gregory Polanco is an extremely toolsy and promising outfielder who likely will take over in right field in June.

6. Which prospect on the PIttsburgh farm that likely won't make his big-league debut this year are you currently most excited about?

7. How do you think the NL Central standings will look at season's end?

It depends on where you read them, doesn't it? In your local newspaper, some neatly-spaced columns of Franklin Gothic text, maybe with a bit of ink smudge if you aren't careful! On a website, the same neatly-spaced columns, this time with hyperlinks, and maybe you hover over the top one and it says "Cardinals" ... Wait, that's what you were really asking! You made me say it. Well done.

8. Tell us about your new book, Dry Land, and what inspired you to write it.

Dry Land follows Pirates fans through the team's 20-year losing streak and asks, "Why did we do this to ourselves? Why did we continue to follow a team with so little to offer, and how did the Pirates change us?" The Pirates' case says a lot about why we follow sports teams in the first place, because they posed such a severe test of fans' loyalties. If you're a Cardinals fan, there's a ton of schadenfreude in there, but the book also has a lot to say about what it means to be a fan of any team.

You can (and should) read the excerpt from Dry Land here.