Two months ago, if I was told I was going to use some of my pharmacy school notes for a VEB post, I would have sincerely questioned the direction of this site. However, I think the Jaime Garcia injury is a perfect time for me to incorporate some of my pharmacy knowledge into a baseball post.

In this MLB.com article, titled "No damage, but Garcia to miss Opening Day," Jenifer Langosch revealed the diagnosis Jaime Garcia received after visiting Dr. James Andrews for a second opinion on his ailing shoulder:

"Doctors have since diagnosed Garcia with bursitis, which is the swelling of the fluid-filled sac between the muscles, tendons and joints in his shoulder."

The good news? It appears Garcia will not need another surgical procedure. The bad news? It is unlikely he will ever return to his pre-shoulder injury form ever again. Four years removed from Tommy John surgery, his elbow should be fine for years to come. However, he is still experiencing shoulder discomfort despite what was deemed a successful surgery last year. Though no new structural damage was found in the MRI, some sort of mechanical problem is occurring each time he throws a baseball or he wouldn't be having problems such as bursitis. At this point, it is likely a problem that will never be fully fixed/healed.

Well, reports indicated that he received a cortisone shot last Wednesday and that he will rest 10-15 days before resuming his throwing program. Before I get into the details of cortisone shots, let's briefly discuss bursitis first. Inside most major joints of the body, there are fluid-filled sacs known as bursae (plural form of bursa). The purpose of these sacs is to provide cushion between the bones of the joint as well as the tendons and muscles involved with each joint. In short, Garcia's bursa of his left shoulder is inflamed (termed "bursitis") to the point where the swelling is causing him pain each time he throws the ball. Honestly, he probably experiences pain while doing ordinary, non-baseball related tasks as well.

Cortisone shots have become a primary treatment for inflammatory problems such as the one Garcia is plagued with right now. Though oral NSAIDs (non-steroidal anti-inflammatory drugs) like ibuprofen (Advil) or naproxen (Naprosyn) can be beneficial, anti-inflammatory injections have been proven in some studies to be "superior in speeding recovery from, and preventing recurrences of, bursitis" (data from UpToDate Online, likely unavailable to readers outside of the Butler University network). However, according to a 2003 meta-analysis of 26 studies done on patients with shoulder tendinitis, it was deemed that anti-inflammatory injections were no more efficacious than oral NSAIDs. However, that was all the way back in 2003, so some may question if it holds true 10+ years later. To be honest, it is really up to each physician's personal preference, after discussing the situation with his/her patient of course.

So what's in a "cortisone shot"?

The term "cortisone shot" is actually slightly outdated because the injectable version of cortisone is no longer on the market. These shots should probably be called "triamcinolone shots" or "methylprednisolone shots," but "cortisone shot" is easier to pronounce and they basically serve the same purpose, so I presume it will be the term used for a long time to come. 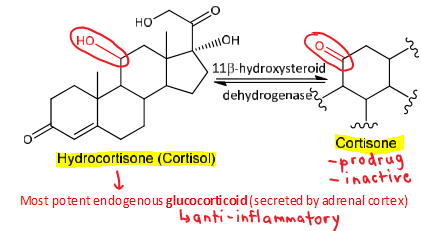 Cortisone is considered a "prodrug" which means it inherently has no activity in the body, but certain body enzymes (such as 11 beta-hydroxysteroid dehydrogenase) quickly convert it to its active form, hydrocortisone (shown above). However, like I said above, true cortisone injections are no longer on the market. 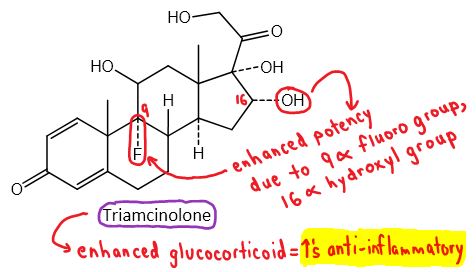 As you can see, the structure for triamcinolone is pretty similar to that of cortisone and hydrocortisone. However, considering it is a synthetic, its manufacturers were able to tweak its structure to allow for enhanced glucocorticoid activity, which in turn (as I described above) leads to more anti-inflammatory activity. Those few tweaks are circled in red, and though they may not seem like much, they really do make a huge difference when it comes to the specificity of a drug's action.

Okay, it's an anti-inflammatory, but how does it actually work?

This is where pharmaceutical jargon takes over. I will provide the word-for-word mechanism of action from Clinical Pharmacology and then do my best to explain what it means it layman's terms.

The reason why triamcinolone injections (aka "cortisone shots") can be considered more effective than oral anti-inflammatory medications is because they get to the site of inflammation (Garcia's shoulder) much quicker, and they tend to stay at the site of the inflammation longer in order to produce maximal effect.

So what does this all mean for Garcia? He should be feeling much better right now because the injection takes just a few hours to start having an effect and can last for a week or two depending on the patient. The swelling should have begun to subside and his pain should be diminished. However, what will happen when he begins throwing again? That remains to be seen, but I strongly believe there is something mechanically wrong with his shoulder/pitching motion and that he will unfortunately have to work his way around it for the rest of his career.