The Cubs won't be very competitive in 2014, but that's because their plan is to be super-competitive down the road.

The Chicago Cubs haven't won a World Series since Abdühlamid II was sultan of the Ottoman Empire. On opening day of the last season in which the Cubs won the pennant, the United States was at war with Nazi Germany and the Empire of Japan. The Cubbies don't have a realistic chance to win any sort of championship this year, but that's because Theo Epstein and Jed Hoyer are playing a long game that might see the club competitive in the year of the 110th anniversary of its last World Series crown.

Epstein and Hoyer inherited a team that needed a complete overhaul. And that is just what their front office has executed. They've gradually dumped the various high-salaried players they inherited from the previous regime. The final remnant was outfielder Alfonso Soriano, who the Cubs shipped to the Yankees last year. (Chicago will pay Soriano $14 million to play in pinstripes this season.)

The stripped-down Cubs went 66-96 a year ago, which was five games worse than their Pythagorean record. But finishing 71-91 would not have changed Chicago's standing in the division—they'd still have been in the cellar looking upward at the Brewers, Reds, Pirates, and Cardinals. The talent the Cubs have returning in 2014 doesn't offer much hope for a breakout season that would catapult the team from last place into postseason contention.

In 2013, the Cubs had one position player generate three or more Fangraphs Wins Above Replacement—catcher Wellington Castillo at 3.2 fWAR. Luis Valbueno and David DeJesus tied for second-highest position player fWAR production with 2.0 apiece. At 1.7 fWAR, Dioner Navarro had Chicago's fourth-highest fWAR total. That's right, two of Chicago's four most productive position players by fWAR were catchers. And one of them (Navarro) is no longer with the team.

There is hope for better production from their lineup this season.

First baseman Anthony Rizzo, who tore up the Pacific Coast League while with the I-Cubs, saw his numbers sag last season. Rizzo managed a .233/.323/.419 line. Given his low BA, a .749 OPS gives reason for optimism. The 23-year-old's 11% walk rate reflects a patient batting approach that bodes well for the future. And his .186 isolated slugging (about what Matt Holliday posted a year ago) is also heartening, especially when paired with his 18.4% K rate. Rizzo showed power while striking out at a below-averge rate. Patience, power, and a below-average K% is a very promising combination for a young slugger.

Then there's Starlin Castro. To tell you the truth, I don't really know what to think about the young the shortstop. It's easy to forget how young the shortstop is. Castro has four MLB season's under his blue belt yet he's the same age as Rizzo. This year will be the age-24 season for both. After 2012, Castro had hit for a career .297 average and .761 OPS. The Cubs signed him to a seven-year contract extension worth $60 million. Then the bottom fell out of Castro's batting production. His BA dropped by about 40 points, his OBP did the same, and his power dipped dramatically. Most reports indicate his play in the field suffered as well. By fWAR, Castro was replacement level. There's little reason to suggest the talent Castro displayed from 2010 through 2012 has completely vanished. It's just a question of whether Castro can field and hit at a level to make him one of the cornerstones of the rebuilding project—which Epstein and Hoyer apparently viewed him as entering last season.

Rizzo and Castro are young and carry promise. So does the Chicago farm, which is one of the best collections of prospect talent in baseball. Whether it's Baseball America or Baseball Prospectus, the experts rank the Chicago organization as having one of the top collections of young talent in the game. The Cubs may not compete in 2014, but there is reason for Cubs fans to be optimistic (and Cards fans to be worried) about Chicago in the years to come. 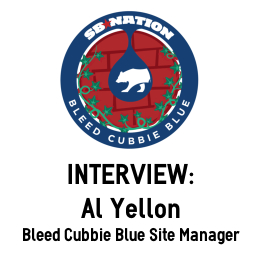 Al Yellon runs our SBN sister site Bleed Cubbie Blue. You can read Al's 2014 season preview on why the Cubs will win the pennant here. Al was kind enough to answer some questions about the Cubs organization. Below, my questions are in bold and the answers in regular typeface are Al's.

1.  What are your feelings about the Epstein/Hoyer regime entering 2014?

I'm quite conflicted about the Epstein/Hoyer regime. They have drafted well and have a stable of prospects just about ready to go, the first of which could debut this year. On the other hand, they have stripped the team down to expansion-team level and each of the last two years have traded off players at the deadline, which has resulted in a horrific August and September.

I don't expect the 2014 Cubs to contend, which could result in another selloff. It's hard to build a winner when you consistently do that.

I believe the front office will have to start playing to win, as soon as 2015, or the fanbase will start to get quite restless.

2. What grade would you give the Cubs' offseason? Why?

There have been just two players added who will be of any significance to the 2014 Cubs: Justin Ruggiano and Jason Hammel. I think you can see that "significance" used above is somewhat ironic, because neither of those men is an impact player. The Cubs were pretty quiet this offseason, thus my grade: D.

3. What are your expectations for Starlin Castro this year?

Castro spent most of the spring not playing after suffering a hamstring injury in the third spring game. He's been working his way back and is now said to be 100 percent. Last year, he had issues with the coaching staff as well as some personal issues. I expect him to return to his 2011-12 All-Star level of performance. If he can, that will be a major factor in how the Cubs do.

4. How do you see the Jeff Samardzija situation playing out?

That sounds pretty definitive, but I'm reasonably sure I'm right. Shark is a good pitcher, probably a No. 3 on a playoff team, but he wants to be paid ace-type money (Homer Bailey-type money, from what I've heard), and he's not worth that kind of deal. In addition, some reports have him asking for a no-trade clause, which Theo & Co. don't give.

I expect him to be wearing another uniform in August.

5. When do you think the Cubs will next be in the thick of the postseason hunt?

And if that sounds harsh, it's not meant to be. Prospects are just that -- prospects -- and if anyone expects them to slide into the starting lineup and have All-Star caliber seasons, it just doesn't work that way.

In many ways, the way this regime is trying to build is akin to what the Royals have done. KC had a number of really good top picks -- Billy Butler, Alex Gordon, Mike Moustakas, Eric Hosmer -- but it took all those guys several years (and in the case of Gordon, a position change) to get to the point where they could lead their team to contention (and KC might make the playoffs this year).

It's tough to swallow, but it could take four more years.

6. Which prospect will have the biggest impact on the Cubs in 2014?

That's a tough one to answer. I'd like to say Javier Baez, but he's going to start the year at Triple-A Iowa and probably won't be in the major leagues till midseason, if then. The other top prospects are a year or two or more away.

So I'll go with Mike Olt. Olt still qualifies for Rookie of the Year consideration and seems to be over his concussion and vision issues. He's been given the starting third-base job and I'd love to see him give the team the defense and power they've been missing there for many years.

7. Which prospect who is unlikely to make his MLB debut this year are you most excited about and why?

Of all the Cubs prospects who are near to making their MLB debuts, Javier Baez is the one guy I think has "superstar" written all over him. He's just 21 and can probably hit at the MLB level right now (though with a large number of strikeouts), but needs work at Triple-A on his defense.

So for this one, I'll go with Kris Bryant, last year's No. 1 pick, who will start the year at Double-A. He has prodigious power but looked overmatched in spring-training games, and if Olt succeeds, Bryant will need to switch positions. Many I have talked to see him eventually in right field.