Michael Wacha is not Adam Wainwright

Share All sharing options for: Michael Wacha is not Adam Wainwright

Over the past few days, I have seen many people compare Michael Wacha to Adam Wainwright. Are both very good pitchers? You better believe it, but honestly, I do not think it is a very good comparison. Both are freakishly tall (Wacha: 6'6", Waino: 6'7"), both players' last names start with the letter "W," both were drafted in the first round of their respective drafts, and apparently some members of the Viva El Birdos community believe the two righties look like alike as well. Well, other than those four things, they really aren't all that similar.

Wainwright was drafted in the first round out of high school. Despite possessing enough athletic ability to be considered All-State in both high school basketball and baseball, Wacha went undrafted. After three dominant years at Texas A&M, Wacha was drafted 19th overall by the Cardinals and was widely considered one of the "most polished pitchers" of his draft class. Thus, Waino was drafted by the Braves based on potential and his "high ceiling", whereas the Cardinals selected Wacha based on his "high floor."

Wacha made a substantial big league impact (especially in the playoffs) less than two years after being drafted. Wainwright, on the other hand, was busy making 28 starts for the Class A Macon Braves. Wainwright spent his whole second season in Class A, while Wacha never even pitched in Class A (Peoria) for the Cardinals. Wainwright was considered the #18 prospect by Baseball America in his age-21 season and then dropped to #49 in his age-22 season.  Wacha, at 22 years old, has already graduated beyond prospect status. 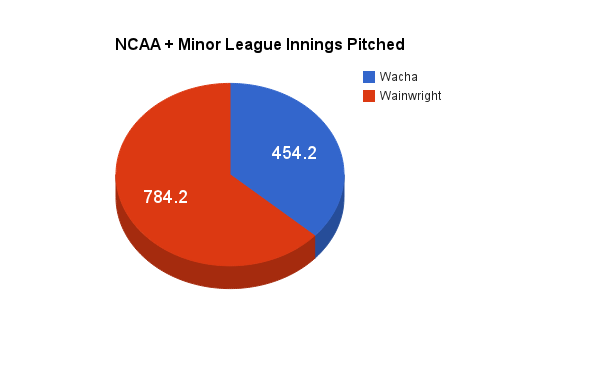 UPDATE (11:25 AM CST): My original graph included just the minor league numbers from both pitchers. Since Wacha pitched three seasons at Texas A&M before being drafted, it was brought to my attention that it would be best to include those innings pitched as well. The addition has been made and applied to the graph.

I could have just provided the numbers, but I think a visual representation did a much better job at showing the disparity in minor league (+ NCAA) innings pitched between the two. The two pitchers took completely different paths (Waino: HS, two teams; Wacha: College, one team) to the big leagues, so it makes sense that Wainwright compiled 72.5% more innings pitched than Wacha. As we seem to be reading about every single day, innings pitched are a valuable commodity with pitchers these days, so it is nice to know that very few of Wacha's were spent while in the farm system.

The point is: from a player development standpoint, Wainwright and Wacha are remarkably different. Wainwright was the hometown high school kid (Brunswick, GA) drafted in the first round based on untapped potential. Wacha was drafted because much of his skills were already refined and in hindsight, were just about MLB-ready. Wainwright's "untapped potential" was there, but it required a trade to St. Louis that "rejuvenated [his career] and gave [him] a fresh start." At the moment, it appears Wacha didn't really need a "fresh start" in order to jump-start his career.

First and foremost, both pitchers obviously rely heavily on good pitch location. Good pitch location is an integral component of just about any pitcher's success. However, that is pretty much where their repertoire similarities end, at least at this point in Wacha's development. I know he is working on gaining comfort with his curveball, but only time will tell how effective it will be for him.

In 2007, Wainwright became a full-time starting pitcher, one year removed from being the closer for the 2006 World Series Champions. Though Wainwright threw harder earlier in his career, he has always relied on pitch movement for success. His top three most-used pitches in 2007 were his sinker (49.71%), his cutter (19.85%), and his curveball (18.95%). For his career, he has used his sinker less often (40.5%) and both his curveball (25.1%) and his cutter (20.69%) more often. Thus, nearly 90% of his pitches are based on movement, and the numbers show that this holds true for back in 2007 as well as today.

On the other hand, Wacha has relied on "straight" pitches, though admittedly with a much smaller sample size to pull from than Wainwright. Including the playoffs, 90.96% of Wacha's pitches in 2013 were either his fourseam fastball (64.23%) or his changeup (26.73%). As "straight" pitches, Wacha must locate them properly and making them look as similar as possible out of the hand is of utmost importance. Wacha did this almost flawlessly in 2013, with his vertical release point on his fastball differing from his changeup by less than half an inch (on average).

Wainwright is the ace of the staff and is comfortably considered one of the top three or four starting pitchers in the National League. Wacha had a fantastic rookie season, but he has only 95.1 MLB innings (including playoffs) under his belt. Wainwright has over 1,300 regular season innings pitched in the majors and almost 2,200 if you include his innings in the minor leagues and playoffs. Wacha, at 22 years old, is much better than Wainwright was at 22 years old.

However, Wainwright has a proven track record for success at the big league level, and if it weren't for splitting votes with Chris Carpenter, he would have likely won a Cy Young Award by now. In conclusion, it is unfair to compare Wacha to Wainwright, or Wainwright to Wacha. Though both hopefully go down as two of the best pitchers to wear the Cardinals uniform, they will each have done it in a very different manner.

I did not choose to compare MLB stat lines because Wacha has yet to pitch a full season in the starting rotation. I also couldn't really compare their minor league stat lines either, since both had very different minor league careers. However, this will definitely be something I would like to explore in the years to come. One thing I did find interesting, though, is that Wainwright has 67.2 career postseason innings; Wacha, just one year into his big league career, is already at 30.2.

Credit to BrooksBaseball and Baseball Reference for the statistics used in this post.