The Marlins of Miami are now 5-0 against the Cardinals this spring. Future powerhouse, anyone?

With a combined WAR greater than three MLB teams in 2013, the pitching match-up of Lance Lynn and Jose Fernandez should have been a tight battle for runs.  Combined with the awful lineups trotted out by both teams, it was almost certainly going to be a pitching duel.  Alas, the uselessness of Spring Training reared its ugly head.

Jose Fernandez pitched poorly, struggling with command most of the game.  Two of his four strikeouts were against Lance Lynn.  Of his two walks, one was on four pitches to Yadier Molina and the other was to a Matt Adams who had no desire to walk.  Some of the runs were a side effect of BABIP, but for the most part, his line accurately represents how he pitched.

Lynn's 8:1 K/BB ratio better represents how he pitched than his three earned runs in five innings.  He started the game with two strikeouts and didn't allow his first hit until the 3rd inning.  But he allowed four of his five hits in that inning.  One of them was a soft liner barely escaping Kolten Wong's grasp, one was a perfectly placed slow roller in the hole between the shortstop and third baseman, and another was a slow roller hit right down the middle.

In that disastrous inning, Lynn did have one great performance against Giancarlo Stanton.  He painted the corners and had Stanton at 1-2.  Stanton then fought off a pitch on the inside corner to keep him alive.  It was all for naught as Lynn threw a nasty breaking ball making Stanton look foolish.  That would be a theme of the day for Stanton.  Stanton went 0-3 with 2 Ks and a soft line out.

Lynn allowed a homer to Casey McGehee, who is a thorn in the Cardinals side.  Despite being generally awful, he has eight career homers and 35 RBIs in 193 plate appearances against the Cardinals in his career, both of which are his best numbers against a specific team. (Preemptive note: I know that doesn't mean much of anything.)  Lynn finished the day with three strikeouts, two pop-outs, and a ground-out.

The Cardinals meanwhile took advantage of a lesser Fernandez.  The game started off pleasantly enough with Wong leading off with a single, followed by a triple by Dan Descalso, and Matt Holliday clearing the bases with a ground-out RBI.  But the Cardinals weren't finished yet with a four-pitch walk to Yadier Molina, and then back-to-back weak BABIP aided singles by Shane Robinson and Peter Bourjos to bring the score to 3-0.

After the Marlins fought back to bring the score to 3-2, the Cardinals added more runs in the fourth with three singles from Bourjos, Pete Kozma, and Wong.  With the score at 5-2, the Cardinals were effectively done scoring runs.  It might have had something to do with replacing Holliday, Molina, Adams, and Bourjos with Scott Moore, Ed Easley, Xavier Scruggs, and Jon Jay.

Conspiracy theorists, get your pencils ready because the Cardinals only lost the lead after they returned probably too early from a rain delay.  I'm not saying I agree, but it's not out of the question that the Marlins paid the umps to keep their undefeated record against the Cardinals this spring.  I'm just saying.

The absolutely dreadful performance of the Cardinals' bullpen today was their downfall.  Jorge Rondon couldn't hit the ground if he fell off of a ladder.  He walked two batters and wasn't particularly close to the zone.  With the bases loaded and one out, he was bailed out by a spectacular diving play by Descalso for a 6-4-3 double play.  Seth Maness was not so lucky.  He allowed a two-run homer and a rocked double in an inning that included neither walks nor strikeouts.  Scott McGregor pitched a 1-2-3 inning with a strikeout though.

The Cardinals didn't make much noise against the Marlins bullpen.  They couldn't take advantage of Dan Jennings, who walked two straight lefties before a strike 'em out, throw 'em out.  The only other hit the rest of the way was Scott Moore, who led off with a single only to be removed from the bases on a double play by Mark Ellis.

I would be remiss not to note my concern for the regular season lineups after seeing this one.  Yes, it's Spring Training, but a lineup that starts with Kolten Wong and Dan Descalso is never acceptable - and I'm afraid it might happen when Matt Carpenter has a day off.  I will also note I hope the Cardinals demote Rondon, because his stats are unimpressive and today he was absolutely dreadful.  I'm not saying Spring Training results mean anything, I'm saying Rondon's control issues will sometimes result in days such as this one, which I would like to avoid.

Bonus: I kept score of today's game because I love keeping score.  Here's my attempt for a Spring Training game with a million switches: 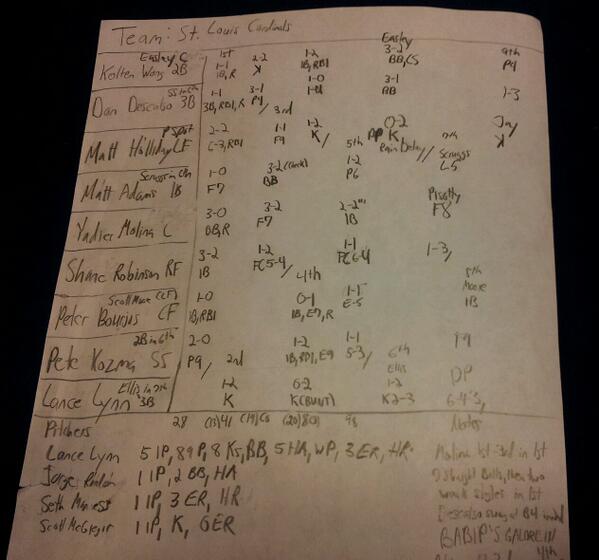 Tomorrow's game is at 12:05 CT against the vaunted Washington Nationals.  Adam Wainwright will take the hill against Gio Gonzalez, one of the few match-ups better than today's.  I don't usually make it a point to watch Spring Training games - this is only my second all spring - but if you are so inclined to pick one game, tomorrow would not be a bad choice.