How predictable was Waino with his curveball last season? Let's take a look at the data...

Share All sharing options for: Adam Wainwright's curveball usage in 2013

Adam Wainwright is the ace of the Cardinals pitching staff and is widely considered one of the top starting pitchers in the MLB. He is capable of throwing five different pitches (fourseam, sinker, curveball, cutter, changeup) in virtually any count. However, despite having a plethora of pitches in his repertoire, Derrick Goold of the St. Louis Post-Dispatch recently wrote an article titled "Wainwright aims to be less predictable" and this is what Waino had to say:

"I get predictable. I got predictable last year. Even though it is still a very good pitch — most of the time it doesn’t matter if I execute I’m going to get an out. I don’t want every time I get to 0-2 for a hitter to sit there and know that a curveball is coming. If I get guys sitting on my breaking ball, I’ve got them where I want them. That’s the one I want them to try to hit. But I also don’t want to have to rely just on that when I have four good pitches."

From the good ole fashioned eye test, I, too, believed Wainwright was somewhat predictable with his curveball by the end of last season. However, we know the reliability of the "eye test" can be questionable at times, especially when the emotions of playoff fandom enter the picture. Thus, I explored the wonderful data provided by BrooksBaseball to see what I could find out: 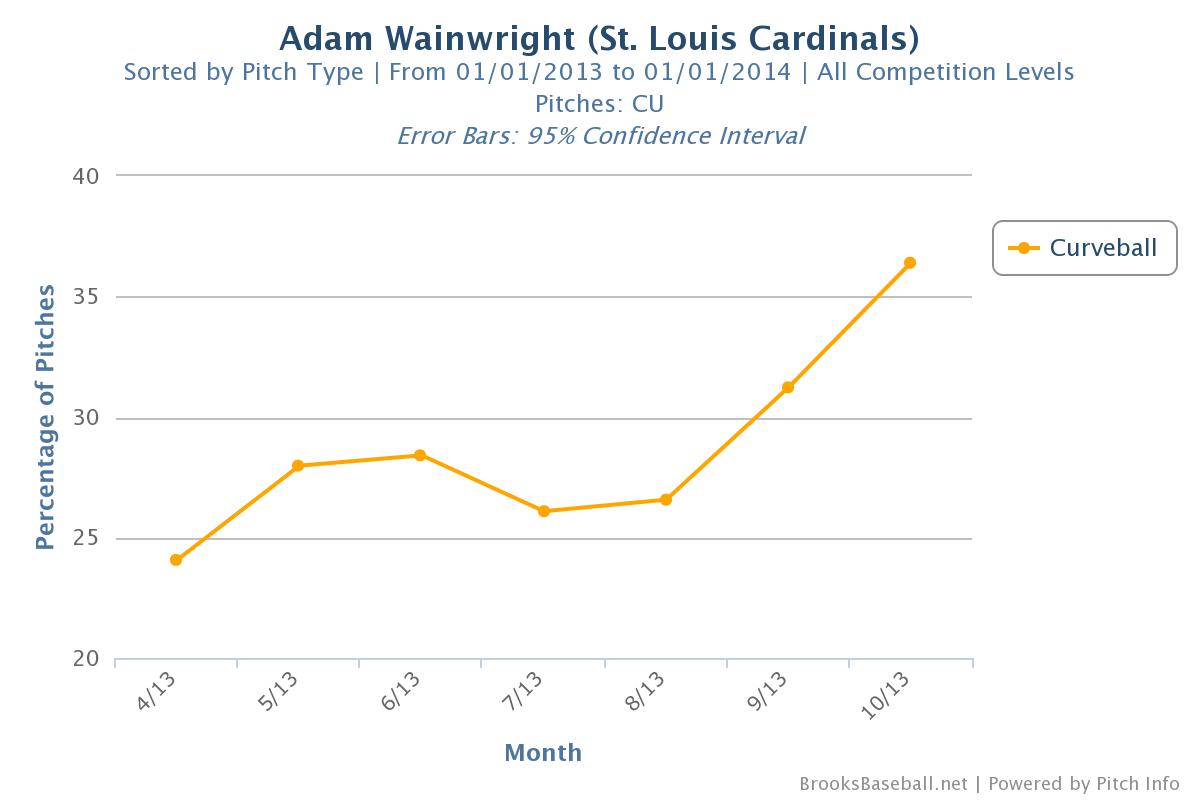 Sure enough, Wainwright did throw his curveball more frequently toward the end of the 2013 season. In April and May, he threw it 24.07% and 27.98% of the time; while in September and October, he threw it 31.23% and 36.40% of the time. Overall, he threw it 28.46% of the time, the second highest percentage of his career (28.58% in 2010). Yet, is this really a bad thing? His curveball is widely considered one of the top curveballs in the game and as Lance Lynn joked in Goold's article, "[he] could shout from the mound that he was about to throw a curve and still get a swing and miss."

Well, based on Wainwright's quote, it is quite evident that he is more worried about being predictable with his curveball in "curveball counts" than just the sheer number of curveballs he throws over the course of a given season. This is completely understandable and actually good to hear from the ace of your team's pitching staff. So, what do the numbers show? Did he get "curveball happy" with two strikes last season? 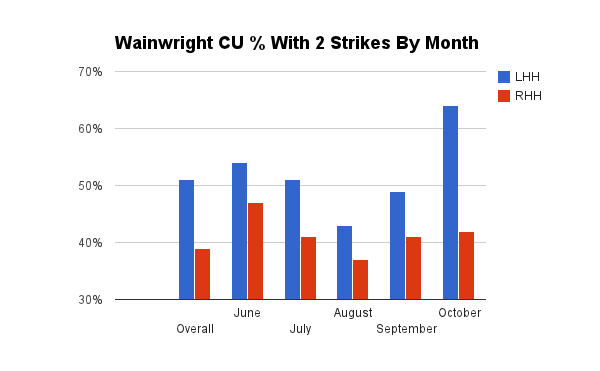 As you can see from the first pair of bars on the left, Wainwright's overall curveball usage with two strikes last season was 51% to lefties and 39% to righties. June saw a slight increase to lefties (54%), and an even higher increase to righties (47%). Wainwright's curveball usage with two strikes in July and August actually decreased compared to the previous month.

For what it's worth and according to ERA alone, July (3.77) and August (4.78) appeared to be Waino's least effective months last season. Was this simply a mid-season funk or is there some sort of correlation going on here? Well, as you can see from the graph, his usage increased in September (2.85 ERA over 41.0 IP) and even more in October (2.57 ERA over 35.0 IP) especially when facing left-handed hitters. In fact, the 64% to lefties in October appears to be his highest percentage ever.

Over his eight-year career, Wainwright's curveball usage with two strikes sits at 50% to lefties and 39% to righties—almost identical to his 2013 percentages. Sure, his percentages increased toward the end of last season, but it appears they weren't too much different than his career averages. Thus, I agree that it is probably a good thing for Wainwright to incorporate other pitches during "curveball counts" in hopes of being less predictable, but at the same time, he has proven to be quite an effective pitcher (top three in the NL Cy Young on three separate occasions) at his current usage percentages. Finally, let's be honest here: when Wainwright truly needs an out next season, which pitch do you think he is going to turn to?

As usual, special thanks to BrooksBaseball for the pitch data used in this post.