Allen Craig hitting analysis, including a look at his 2013 "power outage"

Share All sharing options for: Allen Craig hitting analysis, including a look at his 2013 "power outage"

Allen Craig did not make his MLB debut until he was 25 years old (2010). He did not become an everyday player until 2012. To start 2012, he didn't have a regular position in the field considering Lance Berkman occupied first base (until May 19th when he injured his knee) and the corner outfield spots were taken by sluggers Matt Holliday and Carlos Beltran. Even in 2013, the year his five year, $31 million extension began, he still didn't really have a regular position (largely due to injuries of course)—playing first base 68.3% of the time and the outfield the other 31.7%.

With the 2014 regular season looming and Beltran now in pinstripes, Craig appears destined for right field, but what will happen when (if?) one of the many outfield prospects (hopefully Oscar Taveras) graduates to the big leagues? Considering his contract, the Cardinals would probably like to keep Craig in the starting lineup. In order to do this, though, he would likely have to split time between the outfield and first base—something similar to what he did last season.

Thus, despite having a long-term contract, Craig still doesn't have defensive stability. Not in the sense that he cannot play the field, but more in the sense that on any given game day, he is asked to be ready to play two positions (outfield [RF,LF], first base). He may not always know where he will be playing in the field, but there has always been one constant for Craig since he's become a regular: he can hit the baseball, and he can hit the baseball very well. You don't get nicknames like "Professional Hitter" or the "Amazing Whacker Guy" for nothing.

As you can see, there isn't too much of a disparity between righties and lefties when it comes to Craig's splits. He has more power against lefties (ISO is 86 points higher), but as a right-hander hitter, this isn't necessarily unexpected. Thus, let's take a look at a couple heat maps versus each to see the details behind the numbers: 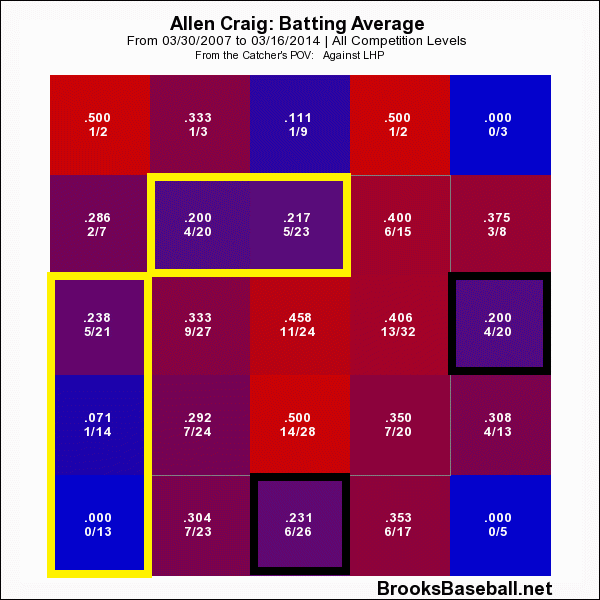 The heat map from BrooksBaseball.net is obnoxiously large, but if you recall from the chart above, Craig's career batting average against lefties is .302. A .302 average understandably doesn't reveal many holes in a player's swing. He has some isolated cold zones (boxed in black, with somewhat small sample sizes) strewn throughout the map, but they are directly bordered by hot zones, so pitchers would have to be extra confident in their command when attacking these zones against Craig.

However, the two zones boxed in yellow appear to be zones left-handed pitchers can attack Craig, considering his career average in these two zones is .165 (a full 137 points lower than his career average versus LHP). Also, both of the yellow zones (despite one being out of the strike zone) can be attacked in any count considering Craig has yet to prove he can be a "patient" hitter versus lefties—career 4.4 BB%. 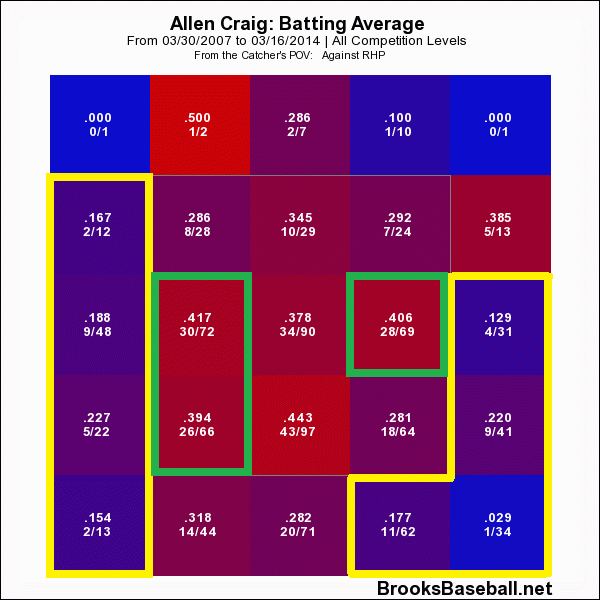 Once again, I apologize for the size of the map, but Craig's career batting average against righties is slightly higher at .308, and to be frank, pitchers don't really have anywhere to attack Craig on pitches in the strike zone. All nine zones that constitute the strike zone on this map have a shade of red to them, and all have a decent amount of data (at bats) to show validity to these percentages.

Yet, right-handed pitchers can attack Craig in the two zones boxed in yellow. In these two zones, Craig is batting a measly .163—145 points lower than his career average vs. RHP. There is a slight problem to attacking Craig in these zones, though. Zones immediately adjacent to them (boxed in green) are some of Craig's "sweet spots." Also, considering both "pitcher attack zones" are out of the strike zone, Craig could be patient (career .366 OBP vs. RHP) on all of these pitches and likely end up with a walk.

In 2012, Craig had 22 home runs and an ISO of .215. In 2013, despite having 49 more plate appearances, Craig had just 13 home runs and an ISO of .142. With over 500 plate appearances in both seasons, something obviously changed. Some people have attributed the overall lack of home run power to the Cardinals' hitting approach under John Mabry and some have blamed the cooler temperatures. Well, Ben wrote a preliminary case study on Craig's "power outage" last month, and our Craig wrote a piece on Allen's "mysterious drop in power" back in January. Neither Ben nor Craig (to my knowledge at least) looked at the charts I have provided below: 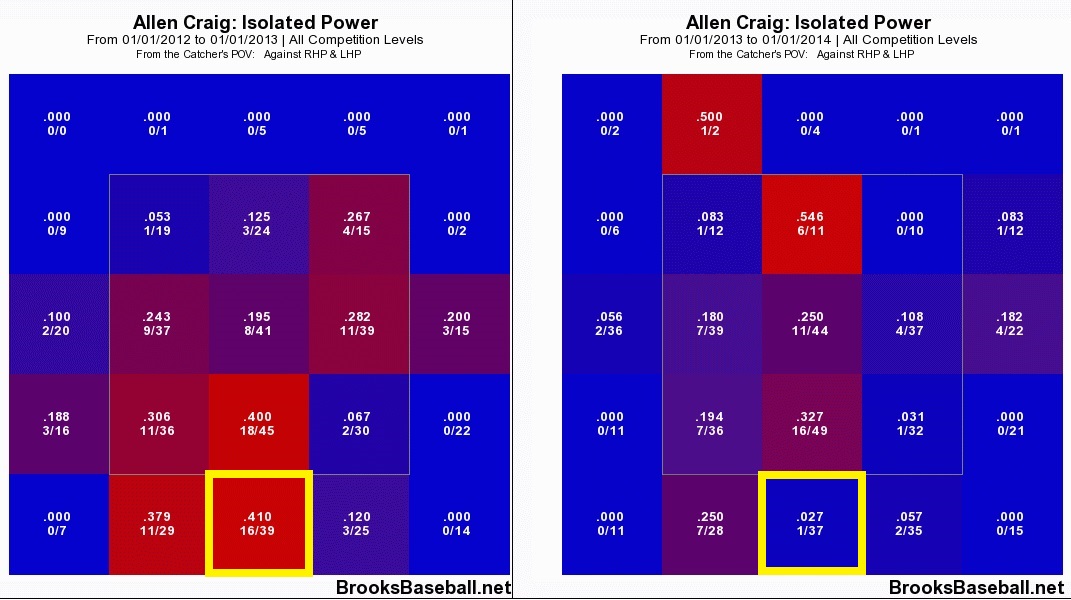 The "2013 power outage" is pretty apparent after looking at the ISO heat maps side-by-side. Many hot zones in 2012 became cold zones in 2013. The most glaring difference is boxed in yellow on both maps. Despite having nearly the same amount at bats in the zone (39 vs. 37), Craig's ISO in 2013 was 383 points lower than it was in 2012. 383 points is a pretty significant difference in my opinion. On the whole, it appears that Craig became less "powerful" on pitches down in the zone as well as "up and away" in 2013.

Did he change his hitting approach? Did he change his swing? Or was it really because there were cooler temperatures in St. Louis last summer? At this point, I do not have the answer, but I am open to discussion with the rest of the community and look forward to tracking his power numbers this season.

Special thanks to BrooksBaseball and Fangraphs for the heat maps and statistics used in this post.