Share All sharing options for: Cards vs. Braves Spring Gamethread 3/13

We're nearly halfway through March, and pitchers are starting to get some real work in. Carlos Martinez threw 62 beautiful pitches yesterday, and I'm looking forward to seeing several innings out of Lance Lynn today. He is also expected to get to around 60 pitches. It's a remarkable testament to how good our staff is that right now a hard throwing dude who strikes out a lot of people, has been worth 6 fWAR over his first two full seasons, and sometimes wears a camel suit, is somehow likely underappreciated by Cardinal fans. 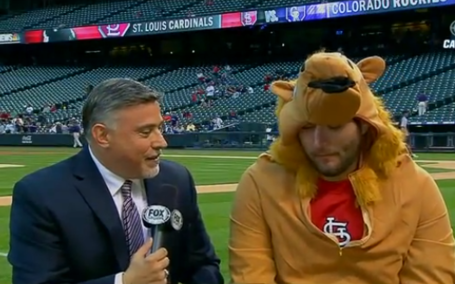 Stephen Piscotty murdered multiple baseballs yesterday and gets a chance to do so again today. Allen Craig gets a little work in at first, and Jon Jay continues to shift around the outfield. He's in left today. Jay is also batting in the second spot.

It bears watching who is getting appearances batting second. Over the last week, Jhonny Peralta has received the honor twice, Jay twice, Kolten Wong twice, and Bourjos once.

The Braves pitchers are having a rough spring, as documented in Grant Brisbee's terrific piece here. Kris Medlen is likely heading toward another Tommy John surgery. Mike Minor has a sore shoulder, Brandon Beachy's repaired elbow is creaking, newly signed Gavin Floyd isn't ready, and, well, they're hoping to get some good innings out of Freddy Garcia this year. Some have pointed fingers at the Braves organizational philosophies, but I'm with Brisbee: "There aren't any lessons to learn, only that spring baseball can be a big jerk."

Well, maybe there is one lesson. No pitching depth is ever so deep that baseball's cruel gods can't reach the bottom with their trawls.

But even with all of those concerns, things are by no means bleak in Atlanta. Minor's setbacks appear, ahem, minor at this point, Beachy might be fine, Julio Teheran looks like he could be a star, Alex Wood certainly has potential, and they just signed Ervin Santana, who should at least be serviceable.

This still looks much like the team that won a lot of games last year. Brian McCann left for New York, where he will surely fight disrespectful subway graffiti, and Tim Hudson signed with San Francisco, but the Braves made sure their young core will stay together, signing Jason Heyward to an extension (2 years), along with Craig Kimbrell (4), Julio Teheran (6), Andrelton Simmons (7), and Freddie Freeman (8!). The entertaining batsman Evan Gattis takes over for McCann behind the plate.

Rosie, Choate, Gaviglio, Lyons, Fornataro, and Stoppelman are in the pen today.

The game gets underway at 12:05 Busch Stadium Daylight Time on FSMW & KMOX, and mlb.tv has our broadcasts as well as the Braves'.

*photo caption credit to spants, who is far more clever than I am.