Why the 'Plate Appearance' Is Better Than the 'At Bat'

The plate appearance is a more accurate reflection of a player's batting than the at bat.

Share All sharing options for: Why the 'Plate Appearance' Is Better Than the 'At Bat'

At bat. It just rolls off the tongue. It's aratatatat charm harks to the crack of horsehide meeting lumber. Mighty Casey was at the bat in Mudville that fateful day. Baseball cards have at bats on their backs. Even the abbreviation "AB" feels fundamental, the first two letters of the alphabet symbolizing a player's time in the batter's box.

In Little League, pressed up against the chain link dugout, kids cheer on teammates. A few foul balls and a deep count earns a chorus of "Nice at bat!" and "Way to work the count!" If a walk results, the youngsters often sing the "Nice at bat!" refrain. Older and a bit wiser, we baseball fans often revert back to our Little Leaguer selves, excited to praise big-leaguers in the same way while taking in a game.

You can imagine my surprise when I learned that the at bat as a stat does not include walks. Never has. The hundreds of "Nice at bat!" plaudits hollered out over the years after a player drew a walk were wrong. All our lives, we should've been yelling "Nice plate appearance!" to the ballplayers we were rooting on, whether at the Little League diamond or in a Major League cathedral.

The at bat gives us an incomplete picture of a batter's overall performance that leaves out more than just walks. The difference between the at bat and the more encompassing plate appearance can be illustrated in two interrelated ways: what each includes and what each excludes.

Here is what the at bat stat excludes:

The following events are what the plate appearance stat excludes:

Looking at the two stats in the opposite way, the following outcomes are what count as an at bat:

The plate appearance includes nearly every time a player digs into the batter's box. The at bat includes comparatively fewer plays. So the plate appearance gives us a bigger picture of a player's batting efforts because it includes more plays. Depending on the player, this can mean a sizable difference.

Matt Carpenter immediately comes to mind. He is a grinder with a bat in his hands. Carpenter works the count and draws a lot of walks. Let's compare Carpenter to another leadoff man, but one who is more of a free swinger and less of a walker. The following chart compares Carpenter's 2013 stats to those of Cubs shortstop Starlin Castro.

Castro notched 40 more ABs than Carpenter did, 666 to 626. But Carpenter's 717 PAs were 12 more than Castro's 705. Using ABs to compare the two players is misleading because the stat encompassed many more of Castro's batting plays than Carpenter's.

bgh note: The picture of Carpenter taking a pitch is too good not to include the uncropped version. 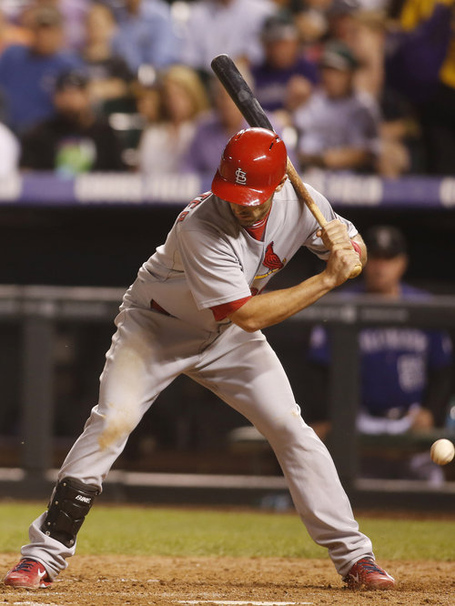 Correction: The original version of this post incorrectly had reaches on error as being excluded from the at bat stat.