Jon Jay Will Need His Batted-Ball Fortunes to Change If He Hopes to Win the St. Louis Cardinals Starting Center Fielder Job

2013 was a down year for Jon Jay's BABIP even though he posted the best peripherals of his career.

Share All sharing options for: Jon Jay Will Need His Batted-Ball Fortunes to Change If He Hopes to Win the St. Louis Cardinals Starting Center Fielder Job

What ball off a bat is most likely to land for a hit that doesn't land beyond the outfield wall? A line drive. 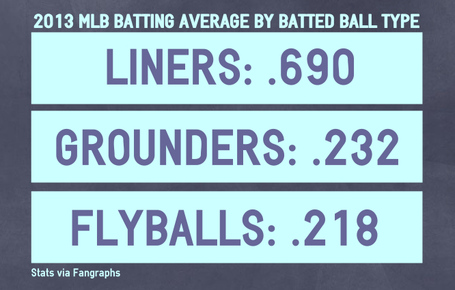 Clearly, all batted balls are not equal. The harder hit, the better. The best of the batted balls are liners. They're the type most likely to find the outfield grass before a fielder can turn them into an out.

Batting Average on Balls In Play (BABIP) is a narrowly focused stat. BABIP tells us only how a batter fared on balls he swung at and put in the field of play but not over the outfield fence. As a general rule, .300 is about average as BABIP goes. In 2013, for example, the MLB BABIP was .297.

St. Louis Cardinals incumbent center fielder Jon Jay is a player who has made a living by hitting for a high BABIP. In his first three big-league seasons, Jay posted BABIP of .350, .340, and .355. While Jay typically rapped liners at a rate higher than average, his LD% wasn't so high that it suggested a .340-.350 BABIP.

In 2012, Jay rode a .355 BABIP to a slash line of .305/.373/.400 that equaled a .341 wOBA and 117 wRC+. Jay's line appeared unsustainable because his batted-ball profile didn't suggest a .355 BABIP. When Jay's BABIP dropped to a more realistic level, my thinking went, his BA and OBP would also experience a corresponding drop that would sap his offensive production and hurt his value as a player. Oddly enough, Jay's 2013 drop-off in BABIP and offensive production doesn't necessarily prove this theory.

Last season, Jay increased his walk rate, pushing it above average. He also saw his LD% shoot up. Nonetheless, his BABIP, BA, and OBP all fell. 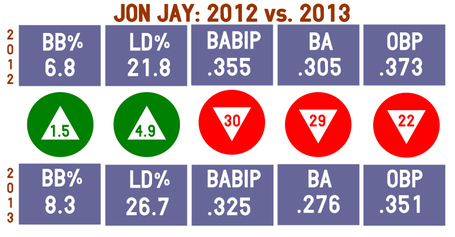 It hardly seems fair that a player could increase his BB% and LD% yet see his BABIP, BA, and OBP all fall. So how should Jay's 2013 have looked?

VEB community member Paulspike created an Expected BABIP (xBABIP) calculator. Earlier this offseason, I used it to calculate the xBABIP for each member of the Cardinals and then looked at how his xBABIP impacted his stat line. According to Paulspike's xBABIP calculator, Jay's 2013 speed, Isolated Power (ISO), Contact%, GB%, LD%, and IFH% indicated that he was deserving of the .350+ BABIP he had posted earlier in his career.

The caveat I stress whenever discussing xBABIP is that it is not predictive. It merely looks at how lucky or unlucky a player was during a previous time period. A higher or lower xBABIP in a given year doesn't mean that player will post a line the next year in line with his previous season's xBABIP because his peripherals may change. This is important to keep in mind with Jay. Last year, Jay's 26.7 LD% was the tenth highest in MLB. Prior to 2013, Jay had not posted a LD rate over 22.5% in a single season. The former University of Miami Hurricane is unlikely to post the type of peripherals that support a .350+ BABIP in 2014. But he may have to if he hopes to beat out the newly acquired Peter Bourjos for the primary center fielder job.