Share All sharing options for: Advanced Stats Indicate Lance Lynn Is Poised to Emerge As a Top-Tier MLB Starter

Joe Strauss's weekend column on stltoday.com is based on the false premise that Lance Lynn is a good major-league starter despite what advanced stats say about his first two years in the role. Strauss frames his case as pitching "wins" vs. advanced stats. In reality, someone can think Lynn is a good pitcher without paying any mind to his pitching "wins" total, and focusing on his advanced metrics. I did so just last year during spring training. Nonetheless, let's have a look at the holes in Strauss's logic and how advanced stats indicate that Lynn is a far better pitcher than some folks give him credit for.

Pitching "wins" reflect the performance of a pitcher's teammate relievers and batters as much as his own.

Whether he meant to or not, Strauss does an excellent job of demonstrating how silly it is to cite a pitcher's "wins" total as indicative of his skill. Strauss notes that Lynn shares with Adam Wainwright the National League lead with 33 pitching "wins" over the last two seasons combined, ahead of two-time Cy Young award winner Clayton Kershaw. Would any knowledgable baseball fan suggest that Lynn is as good a pitcher as Wainwright or better than Kershawn? Of course not. But, if we go by pitching "wins," Lynn has the same total as Wainwright and more than Kershaw. By comparing Lynn's pitching "win" total to that of Wainwright and Kershaw, Strauss does an excellent job of demonstrating how foolhardy it is to gauge an individual starter's pitching performance by the archaic stat.

During the Hot Stove, I gave you a graph that shows why the pitching "win" has become obsolete over the last 100+ years: 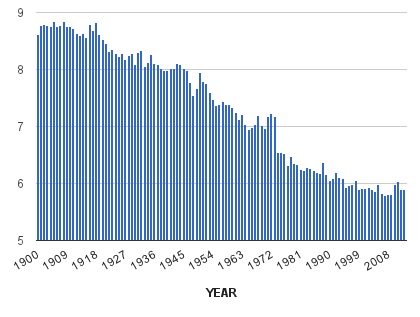 Over the first half of the 1900s, big-league starters averaged around 8 innings pitched per game (IP/GS) or more. But over the past century, the average innings a starter throws per game has fallen off steadily. It's now below 6 IP/GS, which is closer to the minimum of 5 IP to qualify for a pitching "win" than a complete game. Because starters' outings are growing shorter and shorter, whether they receive a pitching "win" for their start on a given night has become more and more dependent on how their teams' relievers perform. Add to this the importance of the run support a pitcher's batters give him–which Strauss covers so well in his column–and you have a stat that does not do a very good job of telling us how an individual starter performed on a given day.

What stats does Strauss seem to think the "church of advanced stats" adheres to? He writes:

Few argue against Kershaw as the league’s best pitcher or Wainwright as the Cardinals’ ace. For example, the Cardinals have scored nine or more runs in 14 of Lynn’s 64 career starts. They’ve done so in seven of Wainwright’s 66 starts the last two seasons. However, Lynn’s body of work deserves more than an asterisk because an alphabet soup of metrics fails to unconditionally embrace him.

Only four qualifiers allowed a higher batting average on balls in play (BABIP) than the .301 against Lynn.

"I don’t know what half of them mean," Lynn said without flinching. "When I look at the pitchers who are successful, I look at how the team does when they pitch. I look at the innings involved."

By stringing together stats that he apparently believes to be advanced, Strauss badly muddies the waters. Nearly all of the stats he uses aren't advanced. And the one stat he brings up that can be described as advanced–Batting Average on Balls In Play (BABIP)–he misuses.

Earned Run Average (ERA) has been an ubiquitous pitcher stat since before Bill James, viewed by many as one of the founding fathers of advanced baseball stats, started writing about the game. ERA is simply the number of earned runs a pitcher allows per nine innings. So the formula for ERA is:

What is an earned run? A run that isn't unearned of course. So what is an unearned run? According to The Baseball Dictionary, "A run that is scored because of an error, catcher's interference, or passed ball, or following an error on a play that would have ended the inning." The official scorer determines what is an error and what is a hit, so the official scorer has some say in whether a pitcher is charged an earned or unearned run.

But what about the plays that are not made in the field by slow fielders with bad range or a poor throwing arm? These balls in play are hits that lead to earned runs because of subpar defense even though the official scorer charged no fielder with an error. This is how the defense behind a pitcher can influence his ERA.

Advanced stats recognize the impact a pitcher's defense can have on his runs allowed. As a result, advanced metrics have isolated a pitcher's individual performance from that of his fielders. So it's curious that Strauss would cite Lynn's poor ERA and WHIP as something that folks who know about advanced stats hold against the Ole Miss alumnus. The opposite is true.

In the late 1990s Voros McCracken set forth a method of pitcher evaluation that was radical at the time: Defense Independent Pitching (DIPS). The bedrock principle of DIPS is that pitchers don't have any control over what happens when a batter hits the ball and puts it into the field of play. In a Baseball Prospectus article published in 2001, McCracken used BABIP to demonstrate this principle. A pitcher's BABIP fluctuates wildly from year to year, which indicates he has little-to-no control over the outcome on such plays. This stands in contrast to a pitcher's strikeout, walk, and home run rates, which remain far more constant. Because of this, DIPS-inspired advanced stats ignore hits that occur on balls in play and focuses on what a pitcher can control:

This is why the following section of Strauss's column on Lynn makes no sense:

Only four qualifiers allowed a higher batting average on balls in play (BABIP) than the .301 against Lynn.

Strauss has strung together a handful of stats with no rhyme or reason. Lynn's ability to strike out batters is his most important skill, and advanced metrics take it into account. Walks are something else that advanced stats use in evaluating a pitcher's performance. But hits are not. This is why the stat WHIP (walks plus hits per innings pitched) has fallen by the wayside. Advanced stats are premised on a pitcher having little-to-no control over his hits allowed. This same cornerstone principle is also why no one who believes in the utility of DIPS-inspired advanced pitching stats would hold Lynn's fifth-highest BABIP (among qualifying pitchers) against him.

Advanced stats indicate that Lynn has pitched better than his ERA suggests.

One of the most widely used DIPS-inspired advanced metrics is Fielding Independent Pitching (FIP). The formula for FIP is based on strikeouts, walks, hit batsmen, homers, and innings pitched. But the formula for FIP also gives different weight to these outcomes. A homer is far more harmful to a pitcher's team than a walk, so it gets more weight. A strikeout has less positive impact than the negative effect of either a homer or walk. These realities are reflected in the formula for FIP:

The constant is added to put FIP on the traditional ERA scale. This makes the stat have a more intuitive feel for lifelong baseball fans like you and me. Why is FIP better than ERA? FIP is better at predicting the future than ERA is. Study after study has shown that a player's FIP tends to have a higher correlation with his next season's ERA than his ERA does.

Consider Lynn's stats for each of the last two seasons:

As you can see, Lynn's ERA was 0.29 higher than his FIP in 2012, the 20th-highest gap among qualified pitchers. Last year, Lynn's ERA-FIP gap was 0.69, which was fifth-highest among qualified pitchers. Over the past two season's combined, Lynn's FIP ranks 21st in all of baseball, ahead of James Shields, Mat Latos, Jordan Zimmermann, Matt Cain, CC Sabathia, and Jered Weaver. By FIP, we should expect Lynn's ERA to be closer to 3.28 in 2014 than the 3.97 ERA he posted a year ago. Contrary to what Strauss would have you believe, the advanced pitching stat FIP indicates Lynn is poised to emerge as a top-tier MLB starter in 2014.