A little over four months ago, this happened. I don't know about you, but I cannot wait for more of these this season.

Share All sharing options for: Matt Carpenter v. Clayton Kershaw: The At Bat

Considering it is Matt Carpenter community projection results day and there is no live baseball to break down, I figured it was the perfect time to revisit one of the best at bats I have ever watched given the circumstances. Before we get into the details, let's take another look at the video and then an interactive tiered graph:

That's right. Matt Carpenter's at bat (or plate appearance, sorry Ben) versus Clayton Kershaw on October 18, 2013 deserves its own tier, right up there at the very top (I couldn't put him at the peak because no text is allowed up there, but you get the point). Kershaw, arguably the best pitcher on the planet, had one out in the bottom of the third and had yet to allow a run. He had racked up three strikeouts (including one to Carpenter to lead back in the first).

He wasn't necessarily on "cruise control" because it took him 33 pitches to get through the first two innings and four pitches to retire Wacha on a groundout to leadoff the third. It was at that point in the game (the second time through the order) where really anything could happen. Thankfully for the Cardinals, Carpenter came out on top, and Kershaw unraveled soon thereafter. After Carpenter's double, six of the next eight batters reached base which led to four runs. Eventually the Cardinals would score five more, with three of those being charged to Kershaw.

Thus, the Cardinals won Game 6 of the NLCS 9-0 and successfully moved on to the World Series to face the Red Sox. To this day, I wonder if the outcome of that game would have been different had Carpenter not battled Kershaw so well with one out in the third. To be honest, I don't even want to know because it was a thing of beauty and something I will remember forever. Let's break it down:

The At Bat (or Plate Appearance)

The Carpenter v. Kershaw battle took 11 pitches before it reached its conclusion. Instead of leading to a sample size argument, the rest of this paragraph can be put into the "for what it's worth" category. In 2013, Kershaw threw an average of 3.78 pitches per plate appearance, so this PA was nearly three times as long. Eight of the 11 pitches (72.7%) resulted in foul balls (with an incredible seven in a row), 54% higher than Kershaw's foul rate in 2013. Statistically, this may not be significant, but in the moment, I am nearly positive it had an impact on Kershaw's psyche. The Cy Young Award winner was not used to prolonged at bats filled with multiple foul balls, and yet, this is exactly what Carpenter gave him. 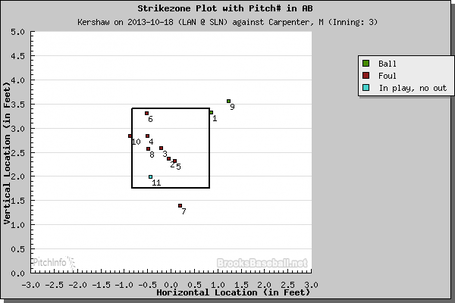 By now you are either really pumped up for the start of the season or you're asking yourself, "What was the point of this post in the first place?" As the author, I completely understand both stances. However, it is Matt Carpenter Day at VEB, and I figured it was a perfect time to reflect on how awesome Carpenter was last season. Instead of providing a season recap, I focused on a microcosm of Carpenter's 2013 performance. He finished fourth in NL MVP voting and provided us with many lasting memories like the one seen in the video above.

I have one last thing to note since I couldn't find a good place to put it in the article. Kershaw had Carpenter in a 1-2 hole—a position in which he held hitters to a minuscule .144 batting average last season (and .136 for his career). Carpenter didn't care about being in a hole with the NL Cy Young on the mound. If anything, Carpenter was somehow more comfortable with two strikes in 2013, and his slash line backs this notion up: .349/.431/.780.

You know I am ready for a Carpenter v. Kershaw rematch. Are you?