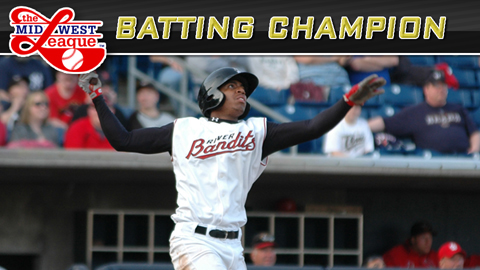 The first time I heard Oscar Taveras' name was in 2011 over the PA system at Modern Woodman Park in Davenport Iowa. The prospect buzz surrounded Carlos Martinez at the time who started the year in the River Bandits rotation but was quickly promoted after a short eight game stint. Taveras then took the stage and spent the summer crushing Midwest League pitching like it was a slow pitch softball league. He ended the year with the MWL batting title and was then on everyone’s radar.

Of all his powerful swings that summer the one play that stands out from the rest in my memory was a catch he made on a ball that would normally fall for a bloop single. Oscar charged in at full speed and dove head first while kicking up a divot in the process. This hustle and all-out effort immediately endeared him to me as a fan. Following his MWL breakout season I eagerly awaited his inevitable big league debut. I lauded his abilities to my friends telling them to just wait and they'd see that this kid was going to be a star! I snagged his first Bowman card from ebay and scoured the web in search of the latest updates on his road to the show.

Upon making his big league debut, he jumped into the limelight in the most dramatic way possible with a home run that seemed to pierce the sky as a downpour began. The buzz was amazing from high fives at the stadium and friends texting each other to status updates on Facebook along with tweet after tweet. Cardinals fans of all generations friends, family, and strangers came together to marvel at the youngster and rejoiced that #Oscarfest had started.

His friends and teammates spoke of the contagious nature of his smile. He seemed to be smiling in every video or photo that was taken of him. While many fans called to #FreeOscar from the bench he was the consummate team player and cheered on his teammates from the dugout. He made the most out of his pinch hit opportunities in the playoffs and gave us all reason to celebrate once again. He was the source of a bounding optimism that sprung from youth and transcended baseball.

The world has tragically lost Oscar but let's not lose his smile. I've decided to do 18 random acts of kindness over 18 days to pass on his smile to those around me and I challenge each of you to do the same. You don't have to dump a bucket of ice on your head and post it in a video on Facebook, just simply do something nice for those around you and pass on a smile. You can buy a co-worker a soda when they're dragging at 2pm or have a pizza delivered for an elderly neighbor or family member. You can do anything as big or small as your heart desires. It's a tribute to a young man that brought smiles to all of our faces and you'll be making the world a little better place in the process. So please join me and do #18for18.